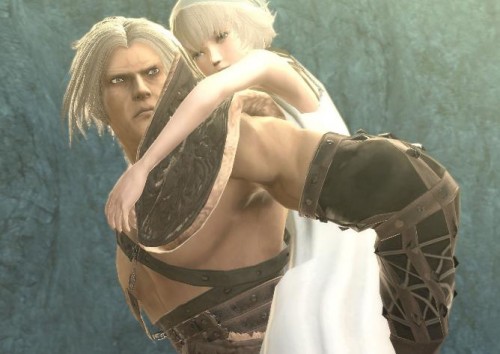 A funny thing happened when I started looking for my own games.  Having listened to Unreality readers, and thoroughly enjoyed the best of the best of the last generation’s console games, I turned inward.  “Okay, you fell in love with Mass Effect,” I said to myself.  “You enjoyed the hell out of GTA IV and Red Dead Redemption, and you spent waaaaaaaay too much time banging away on a mortal and pestle in Skyrim (100 Alchemy; totally worth it) – now what?”

Deep cuts, that’s what.  Gut feelings, spur-of-the-moment pickups, and not relying on Metacritic.  That’s what led me to the Square Enix forgotten child, Nier, and though I’ll be the first to say that the game is flawed, perhaps even deeply flawed, at its heart, it’s compelling, evocative, and worthy of your time.

…Well, maybe.  I’m not going to pretend that everyone who likes video games likes them for the same reasons, or even that the best video games are so good that literally every gamer should like them.  Rather, I want to tell you why you shouldn’t write off Nier, or why if you’ve never heard of it, it might be worth a shot.

Nier at its most basic is a story about a father doing whatever it takes to cure his daughter from a deadly illness.  The game as a game, at its heart, is a pastiche.  There’s deliberate homage to many styles and even specific games.  I suppose you’d call it an “Action RPG” in the vein of Devil May Cry, but with a framework and ethos that strongly (sometimes very overtly) resemble the Zelda franchise.

I will say, right off the bat, that Ocarina of Time was “that game” for me – I was probably 10 or 11 when it came out, I played it for a few hours at a friend’s house, and then spent the better part of 6 months convincing my parents to buy me an N64 so I could play it.  So, anything that evokes Ocarina of Time for me is going to be playing with a stacked deck when it comes to getting me engaged.

How does it evoke Zelda?  Let me count the ways.  First, the music.  Video games aren’t usually known for their soundtracks, but this one should be.  Just like Ocarina of Time had those catchy yet repetitive themes for each area (I still sometimes catch myself whistling the Lost Woods theme), Nier has its own cupboard of exquisite music.  Mirroring the gameplay, the music is a pastiche of tone and origin, with Celtic, Spanish, and Japanese influences throughout.  One of the first things that really made me appreciate the game was about 30 minutes in, when you’re exploring your home village, the music kind of blends and bubbles into the background, very peaceful-like, but then as you approach a fountain with a woman strumming a stringed instrument, her voice fades in and gets woven into the score!  And it’s quite beautiful. 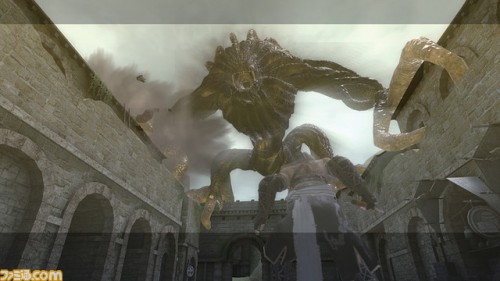 Also, like Zelda, the game embraces a certain ethos that’s at once both wacky and sad and unapproachable.  As opposed to, say, Mass Effect, Nier doesn’t drown you with dialogue and backstory – not that I’m criticizing that approach.  The Mass Effect series gives you ALL the information, painstakingly crafting a universe and history and cast of characters that you interact with so much they almost come alive, and you understand them.  This game, like a lot of other Japanese games, comes at you slant-wise.  It’s a post-apocalyptic world, but the whys and hows of why it’s 2050ish and we’re running around with swords and magic isn’t made immediately clear.  There are hints, not in your face, but just out there, standing quietly.  The ruins of a massive bridge poking out of the water.  A few scattered documents referencing a large death toll and some odd code names.  A few obscure comments about how the big cities sunk into the sea.

Then there’s the tone.  There’s a hefty dose of whimsy, with talking books, giant monsters, villagers with fairy-tale problems, a city in the desert populated by people who all wear masks and slavishly follow arbitrary rules.  A lot of the oddball stuff is played for laughs.  But, like Zelda, there are a lot of moments when if you stop to consider the ramifications or implications of something you’ve just learned, there’s some deep, deep sadness and pathos running through this game. 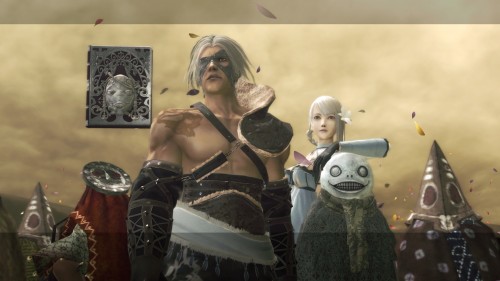 The characters are pretty fantastic.  Whoever voices your friend the talking book, Grimoire Weiss, is definitely channeling Alan Rickman, and his dry, quippy, extremely British personality contrasts nicely with your character’s grim seriousness.  And then there’s Kaine.  I have to admit, I hung my head in shame when she was introduced – a bigger piece of fanservice I could not imagine.  She wears, basically, a thong, and a flimsy nightie to go along with her bad-ass twin swords.  I guess I have no room to talk, since I too was a 14 year old boy once, and fell for obvious ploy of, “Look, boobs!” that was Dead of Alive Extreme Beach Volleyball.  Still, it’s pretty shameful.  And the graphics – middle of the road then, fairly dated by 2014, I’d imagine, certainly don’t go us any favors.  Her breasts basically look like they’re coconuts, shape-wise.  It’s fairly strange. 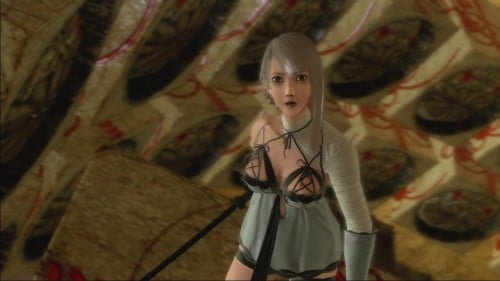 However, she happens to be incredibly well voice-acted, and she talks and sounds like a very real person, with a very foul mouth.  Her interactions with Grimoire Weiss are the stuff of legends, and their banter turns what could be simple background party chatter into the highlight of the area.  There’s not much of a real “party,” as your companions are only marginally controllable in the form of vague orders, and like the vast majority of AI-controlled allies out there, are woefully lacking in the target selection and teamwork areas.  That’s not a knock on this game, though, that’s a knock on all games.  But speaking of which…

Let’s talk about flaws.  This game has them.  In spades.  In fact, the whole reason I wrote this article was because in a very real way, this game is buried by its flaws.  Whatever blend of personality types I have makes me predisposed to look past them, but most people would need a bit more of a push, I’m guessing.  So, what are we dealing with here?

– Outdated graphics.  Not much you can do there, although the game certainly doesn’t look bad, at least to my eyes.  Some of the scenery looks quite beautiful.

– Size.  The size of the world is pretty small.  You’ve got some wide open spaces, like the north fields or the desert, but when it comes right down to it, the total real estate isn’t actually that large for your typical role playing game.  I personally never felt hemmed in or constrained, but your mileage may vary.

– Fetch quests.  Oh, are there ever.  Nothing is certain in this world except death, taxes, and fetch quests in RPGs.  Nier has them, and they’re not pretty.  Villagers will be asking you to collect 10 watermelons or wolf pelts, make no mistake.  In fact, the game itself makes fun of it.  Later in the game, one guy flags you down and asks, basically, if you’re “that guy I’ve heard about who will take any job, no matter how random or menial?”  Then, when you agree to the quest, he laughs and tells you to dance for him, puppet.

– Fishing.  I could write 1,000 words about how fishing probably killed this game for the handful of people who actually did pick it up when it came out.  It’s a horrible confluence of events.  First, you’re required to do a bit of fishing as part of the main story.  Second, the mechanics of fishing are tough to get a handle on, and the in-game tutorial basically flat-out lies to you, or at least does a shitty job of explaining what you’re trying to do.  Third, when you learn fishing in the first place, you’re right next to a beach, which is actually a high-level fishing area and NOT the one you’re supposed to use as a beginner. (The old man you learn to fish from just says you should fish at “the beach”)  If you’re like me, that led to 20-30 attempts at hooking a fish, only to have it immediately get away, followed by cursing, followed by throwing my controller at the screen when I figured out how easy it was supposed to be. 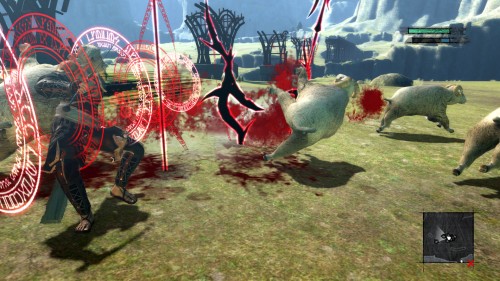 – Inventory and words.  You collect a lot of items in Nier, and the inventory management is workmanlike at best.  You also have “Words,” which are modifiers you can attach to your weapons and spells.  Not a bad mechanic in theory, but in practice it’s fairly clunky.  There are too many items, weapons, and words that don’t do much to differentiate themselves.  Feels a bit like the first Mass Effect in that sense.

– Pastiche.  Here’s something I don’t actually consider a flaw, but I know that some might.  The game wants to be so many different things.  Sometimes it works, sometimes it doesn’t.  But you’ll find yourself playing a side-scroller, or a “bullet-hell” style dodge game with a boss, or getting an extreme vertical view and think you’re playing Diablo, or slipping into an entirely text-based segment, where you literally read what’s happening and pick actions like “go north” or “go south” like the original, original computer RPGs.  I mean, for me, that’s amazing.  But you need a very open mind.

So, that’s the scoop, in 2,000 words or less.  Not a perfect game, by any stretch of the imagination, but it makes you feel the feelings, and games like this one, games that do things like this one does, are why I got into the business in the first place.

Plus, don’t you want to play a game where you can hear something like this? 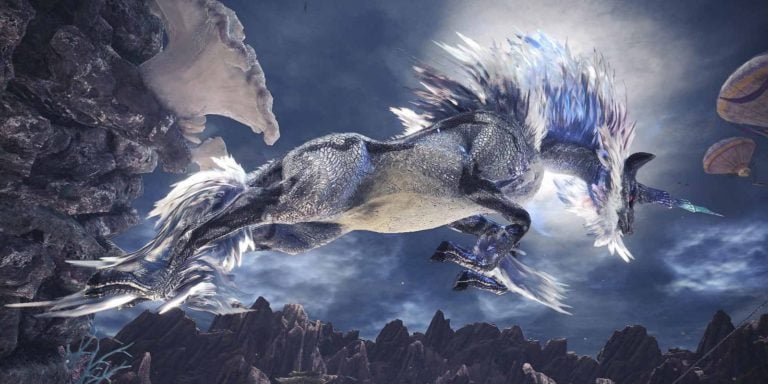