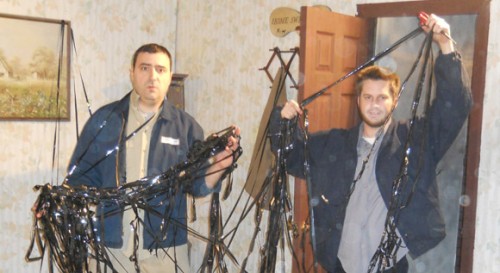 We live in a media-obsessed culture. It’s not enough to merely watch, play, or read something anymore; now you have to live-tweet about it while you upload fanart to tumblr and videos to youtube.

As someone of extreme journalistic integrity, I am going to avoid the pitfall of a media review this week. Instead, I am going to write a review of some reviewers. Total legitimacy.

The truth is: sometimes content that leans heavily on existing media is able to paradoxically stand out on its own. So, in recognition of some of the very best pieces of critical entertainment, here are some of the more talented reviewers that maintain a privileged spot on my bookmark menu… 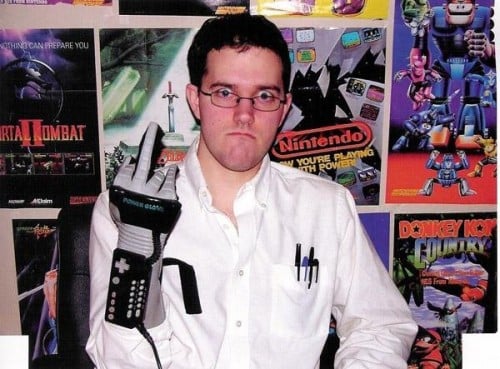 James Rolfe has been making movies since he was eight years old, enlisting the help of a VHS camcorder and more than a healthy dose of Mario Paint for his “special” “effects.” The man clearly loves every bit of the media he covers, and you can tell that he’s a pig in shit when discussing things like skull crushing in Troma films.

His claim-to-fame, as many may know, is The Angry Video Game Nerd (AVGN), a show about a mildly fictionalized version of himself who sits in his basement and plays crappy NES games as well as forgotten consoles and bemoans his misery to the internet.

The first time I was exposed to AVGN, I was instantly hooked. The character managed to find this magic sweet spot that stimulated my love of discussing old video games while at the same time he encapsulated an adventurous spirit.

I didn’t know it at the time, but a lot of this effect has to do with James’ smart script-writing, editing, and set design. Yes, he may shoot primarily out of his tiny basement and formerly out of his even crappier apartment, but these environments define many of us, who toil in the city only to return home to suburbia and seek solace in our media collections.

I actually fell victim to thinking that AVGN was James Rolfe’s legitimate personality. I, too, had Nintendo Power posters lining my bedroom at a young age, and I merely assumed this was a trait that the AVGN carried on into adulthood.

That belief lasted until I realized he was moving the posters around to be visible in every shot, even as he moved about the house running from Jason Voorhees. From that moment I realized that AVGN was merely an act, and I became simultaneously impressed at James’ dedication to character and depressed that he wasn’t a genuine human zoo exhibit of a Nintendo fetishist.

In fact, the AVGN’s unabashed embracement of 80s and 90s games inspired me to begin collecting vestiges of my childhood all over again. I can proudly state that my walls are now covered in Nintendo Power posters as well, and that I’ve amassed a healthy collection of over fifty NES games in order to encapsulate some of the magic that AVGN exudes.

Cinemassacre also hosts many reviews on its site, including the venerable “Monster Madness,” with daily videos in October that cover classic and cult horror films. 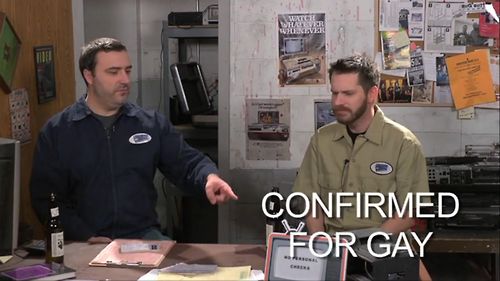 A bunch of drunken hooligans from Milwaukee that actually know a good bit about movies and what makes them enjoyable to watch.

This outfit rose to fame when the “Mr. Plinkett” review of The Phantom Menace became insanely popular online. The review is nearly as long as The Phantom Menace itself, and is composed of voice-over commentary on top of Star Wars clips, interspersed with POV footage of the fictional Mr. Plinkett wallering in his hovel.

What grabbed people such as myself more than the oddball, perverted humor was the incredible insight that the creator, Mike Stoklasa, offered. He was able to pinpoint with precision accuracy where exactly The Phantom Menace became shitty (hint, it was shortly after the opening scroll) and why the film failed at engaging audiences, right up to the clusterfornication of a finale.

Stoklasa also provides extremely well-timed footage from the special features that depicts George Lucas and company holding their collective heads in anxiety at the vomit-inducing first cut of The Phantom Menace.

Unfortunately, creating the Plinkett reviews seems to swallow up a great deal of time without generating copious results, given their scope and the huge task of editing them. Seemingly to make up for this, Stoklasa began a new series called Half in the Bag with his frequent-collaborator Jay Bauman.

Half in the Bag transplants a lot of the sick humor present in the Plinkett reviews, albeit slightly more slapstick and lighthearted. Most of the show consists of Jay and Mike merely sitting around picking apart new movies while they drink heavily. The humorous skits bookend these more serious, often unscripted discussions about the movies they saw.

Just because they take the discussion seriously, though, doesn’t mean they don’t have fun. They once slammed Adam Sandler’s Jack and Jill as a Producers-esque scheme to generate funding for an abysmal movie, supplement it with product placement, then receive a big fat check for Sandler and his cronies before the movie ever hit the box office.

Other shows that Red Letter Media produces include “The Best of the Worst” where Jay, Mike, and some of their other like-minded associates gather around to watch legitimately awful movies and discuss what they managed to like about them.

Also on the site is a new show “Pre-Rec” (whose name absolutely baffles me) but that has managed to come into its own as a spotlight discussion on current games and gaming trends. 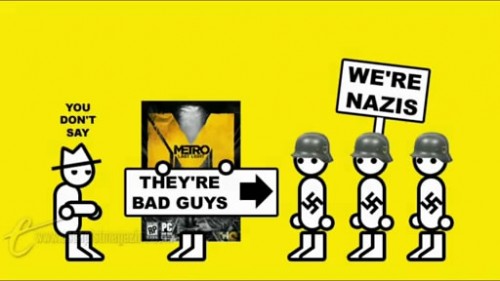 Every Wednesday I curl up beside the warmth of my laptop screen in anticipation of a new review by Ben “Yahtzee” Croshaw. The pity is that the videos last only five minutes, but since the man rattles off his opinion at roughly the same rate that rabbits copulate, a ton of information is packed within that timeframe.

Yahtzee mostly reviews newer games and picks them apart for their design oversights that the vast majority of gaming populace missed out on. His favorite demerit to grant is for stories that don’t make sense. This criticism tends to fall upon stories that were meant to be taken for granted in the first place and were hardly the focus of the game, although the intentional neglect is largely his point.

Poking at a scab everyone else ignores is Yahtzee’s signature trait, however, and he is perfectly capable of tearing apart a game he actually enjoyed playing simply because it offered nothing new or thought provoking in the process.

Yahtzee also has an unabashed love of certain franchises, with an aversion to agreeing with the masses on certain others. His hatred of modern shooters, which he refers to as the “Spunk Gargle Wee Wee” genre, is unparalleled. This vitriol makes him a great go-to to hate on billion dollar franchises that make gaming tread water rather than progress anywhere.

His witticism is also priceless. It’s hard to catch every single joke as he speeds through his scripts at breakneck speed, but once you hear one you might have to pause the video just to stop laughing over the audio. My favorite moment like this was in his Guitar Hero 3 video where he compared the higher levels to flossing your digestive system with barb wire. 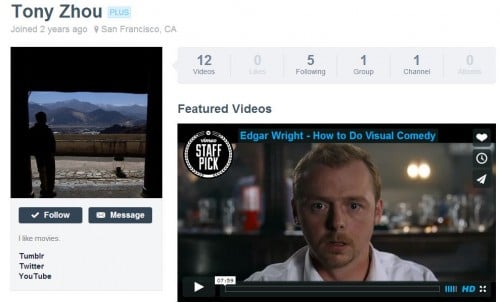 As far as I can tell, Zhou has only been around about a year and has begun to gain some steam with his “Spielberg Oner” video that describes Speilberg’s subtle one-take scenes.

Zhou’s series “Every Frame a Painting” comes firmly from a filmmaker’s perspective, but it is broken down into layman’s terms so that nothing sails over the viewer’s head. In other words, if you want to have your mind blown and actually learn something about how to make movies, then check out his channel.

The magic of Zhou’s videos lies in his ability to notice repeated techniques of a particular director. Many people don’t focus on editing or simply take it for granted, but Zhou goes through the trouble to literally count the frames as the shot occurs in order to make his fine points.

He also objectively evaluates a director’s techniques – such as framing, composition, camera movement, and editing – and relates them to the emotional reaction that they were trying to convey. Zhou thus walks a perfect balance between the objective and the subjective, and he looks at concrete, evaluable criteria to formulate his arguments. He is by far the most intelligent reviewer on this list, though he may lack the others’ entertainment value. 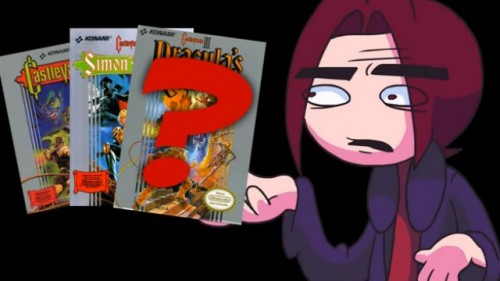 Many of you have probably already heard of Sequelitis or Egoraptor. Hell, most of the people on this list already have millions of weekly viewers, but I made the damn thing anyways, didn’t I?

Despite Sequelitis’s visibility, it still deserves mention. While Arin Hanson aka Egoraptor’s personality flaws are evident right from the first part of his chosen alias, the man is still smart and understands how to edit an internet video.

The difference between most of his content and “Sequelitis” is that, like the Plinkett reviews, they take him an eon to finish, but the results are usually worth the effort. So far, Arin has chosen to focus on highly-venerable franchises, but has managed to notice things that have so far been un-commented on by the larger community.

For example, his argument that the old Mega Man games “teach” the player how to handle challenges by introducing them gradually also indicts newer games for excessive tutorializing. On-screen guides have been accepted as an inevitability given the complicated nature of most contemporary triple-A titles, but seeing Arin describe how Mega Man doesn’t do “that” will hopefully put such mechanics on trial for being obtrusive and unnecessary.

Arin’s latest video calls out Ocarina of Time for not being nearly as good as anyone remembers, especially in comparison to A Link to the Past. While he may not have covered some of the points I wanted to hear, I was glad that someone had come to the same conclusion on first exposure to Ocarina as I had. He had even carried that chip throughout his lifetime to the point where he just had to make a thirty-plus minute video about it.

Arin also blew my mind during his Castlevania IV review with his keen insight into how Konami could have implemented better  game mechanics and level design to enhance the robust whip controls. Those suggestions alone are worth the price of admission, and make me more tolerant of a man who still thinks that yelling loudly is the equivalent of a joke.

Jarrod Lipshy is a BA English graduate and freelance content writer. He collects old video games, especially after falling in love with AVGN in 2008. 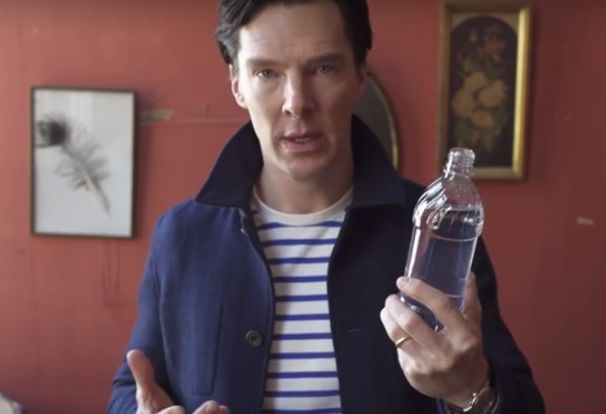