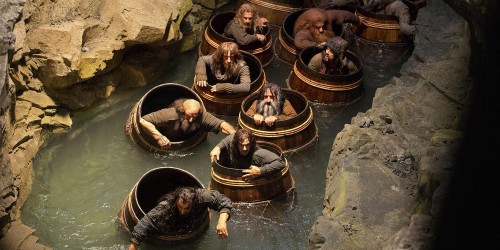 It’s become a cliche bit of criticism: The Hobbit movies are just too damn long.

I disagree. Don’t get me wrong; they ARE too long, but that’s more to do with the fact that the stories are horribly paced, the narrative through-line is almost non-existant, and the adaptation from book to screen has basically rendered the story as a bunch of shallow vignettes.

That’s what really kills Jackson’s latest Tolkien adaptations — not their length, but the sheer amount of superfluous scenes crammed into these things to GET to that length.

And here are 6 of the most pointless elements of this past one. 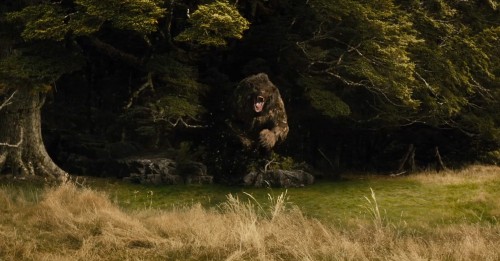 You know, The Desolation of Smaug could lose its entire opening sequence, from the flashback with Thorin all the way through breakfast at Beorn’s, without actually LOSING anything. But let’s focus on Beorn, because if I have to list everything this movie wastes time on it’ll take me about… oh, probably two hours.

So, Beorn. Why is this guy in the movie? I mean, yes, I get that he’s in the book and they wanted to include him. The problem is that he does absolutely nothing FOR the movie other than check a box for people playing “From the Book” Bingo.

The only things of any consequence that happen in Beorn’s house are… um… okay, nothing of consequence happens, unless you count sleeping and eating breakfast as consequential. Which… okay, I went to college too, but we shouldn’t apply the same rules to our fantasy epics.

And sure, some of you might argue that Beorn sets up the danger our heroes will soon face in Mirkwood, but I would argue that dark twisty forests sort of speak for themselves. Sometimes even literally, in this universe. 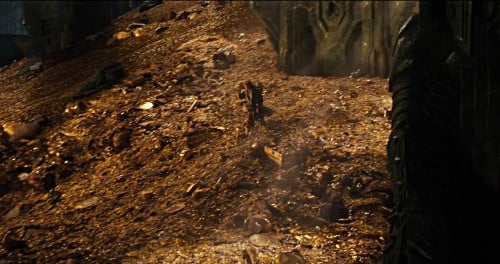 It’s always a bad sign when the climactic sequence of a story is something that doesn’t actually affect that story at all. Fortunately, these sorts of occurrences are vanishingly rare. In fact, I’m struggling to think of another movie where the final gesture is something this pointless (suggestions welcome below).

Our own Nick Verboon alluded to the superfluous nature of Smaug‘s final sequence in his review, but since the movie’s been out for a week now, let’s get spoilery.

Desolation of Smaug concludes, with a confrontation between Bilbo and that titular dragon. Bilbo looks for the Arkenstone, Smaug wakes up, the movie actually bothers to utilize some of Tolkien’s writing… things are looking pretty good. Better, in fact, than they’ve looked during any of the five hours preceding this one.

Then, the dwarves show up. Smaug loses it. Our heroes lead the dragon on a merry chase through Erebor, lighting the furnaces, melting down some gold, you know the drill. Wait, you don’t know the drill, because we’ve never been here before and nobody explains the point of any of this? Oh.*

After what feels like quite a long while, the goal of the dwarves’ plan is revealed: In a great hall draped with the banners of history, Smaug is faced with — drumroll — a GIANT GOLDEN DWARF. Which, uh… Anyway, it promptly melts and drenches Smaug in molten gold, which he then promptly shakes off before escaping.

Uh, what? What was this supposed to accomplish? That’s a massive, massive scene to go absolutely nowhere. 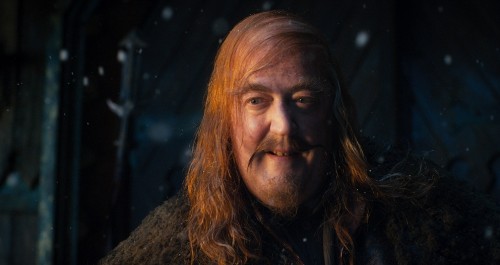 You know, this is the kind of thing that people ate the Star Wars prequels alive over. Why does this movie take a side journey behind the curtain of Lake Town’s political system?

As the title indicates, most of these additions are inexplicable, but what was the motive for including this awkward bit of political satire? Was the greed parable not clear enough already? Did we need the extra Lake Town politics in order to care about Luke Evans’s Bard?** Is this going to somehow matter when a dragon shows up to blast the place off the face of Middle Earth?

The 99% issue is entirely beside the point of anything that happens in The Hobbit. Greed is timeless. The Hobbit‘s symbolism and metaphorical approach to the subject works just fine. Shoehorning in a heavy-handed bit of political satire is rather gilding the lily, in this case. Actually, in this case it’s more like throwing a CGI lily around for ten minutes before Legolas shoots it with his bow while upside down on a trapeze and it’s SO AWESOME I SWEAR IT’S LIKE HE NEVER MISSES.

THIS LINE OF DIALOGUE*** 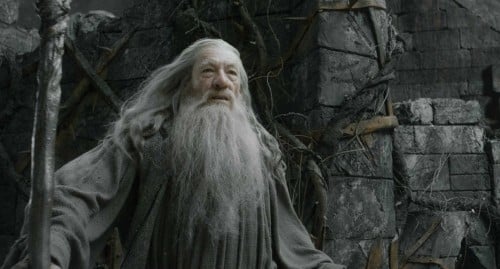 Gandalf:  “There is a concealment charm on this place… *dramatic pause* … which means our enemy does not yet want to reveal himself.”

Yeah, thanks for that, Gandalf. We are four years old. But hey, going back to Legolas… 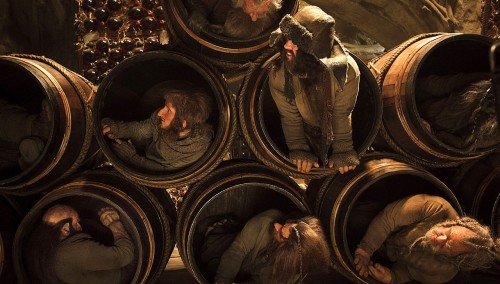 Again, I know this is from the book. Well, the idea of dwarves floating down a river while hiding inside barrels is from the book. I could be misremembering, but I think Tolkien managed to draw a line before writing a scene where dwarves float down a river hiding inside barrels, and then a bunch of orcs jump out to stop them, and then Legolas and Tauriel jump out to stop the orcs, and then a bunch of stuff flies through the air, and then Legolas does sixty awesome bow shots while jumping, and then David has to think really hard about walking out to get some air.

Iron Man 3 writer Drew Pearce threw out a great phrase on the commentary for that movie: “A hat on a hat on a hat.”

It’s tempting to compare this sequence to the Brontosaurus stampede in Jackson’s King Kong adaptation, but… well, that’s probably not a terrible comparison. Except in this case replace that hilarious Brontosaurus traffic jam with a digital Orlando Bloom standing on things that are hard to stand on.

Also — and this is just a little thing, but it’s the kind of little thing that’s so incredibly bizarre that it sort of becomes a big thing — did anybody else notice the two POV shots in this sequence that looked like they came from a GoPro? What the hell was up with that?

Hoo boy. Okay, one more and then I’m done. 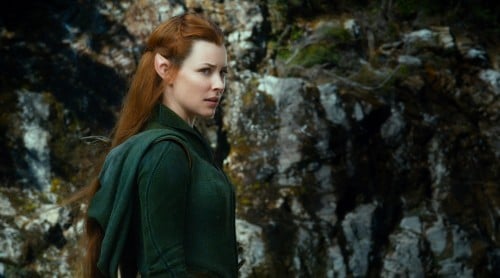 Yeah, you knew this had to be on here. Honestly, it’s hard to put into words how completely contrived this gem of a subplot truly is. As far as I could tell, these two characters simply… start flirting for some reason. Because they’re both pretty, I guess? They talk for like thirty minutes while Kili’s in a jail cell and then they’re soul mates.

It’s not some throwaway story element, either. Tauriel’s crush on Kili is literally her entire motivation for appearing in the back third of the movie. Because if Tauriel’s not in love with a pretty dwarf, what reason could she possibly have to help save the dwarves from being viciously murdered by orcs? Other than hating orcs and not being a terrible person, I mean.

Also, in the context of the larger Middle Earth film series, these two having a thing for each other totally cuts the legs out from under the progressive friendship between Legolas and Gimli in the LotR movies.

And no, I’m not checking to see if Kili is the right dwarf to be talking about here. I’ve seen two movies with this guy in it now, and I never had trouble distinguishing Merry from Pippin in the other trilogy. I will not take any responsibility for being confused.

At least this subplot answered the question from the last movie of, “Why doesn’t this guy even look like a dwarf?”

Also, now there is literally a small penis joke in the adaptation of J.R.R. Tolkien’s classic fantasy novel The Hobbit…

*Contrast this with Return of the King‘s “lighting of the beacons” sequence, with its clear stakes and simple escalation, to see the difference knowing what the hell is going on makes.

**Non-ironic highlight of the movie, by the way.

***I’m paraphrasing. I tried to look up the quote and couldn’t find it, but the point is that Gandalf identified a concealment charm and then went on to explain that people who use them are waiting to reveal themselves. The first movie was way worse about these types of redundancies but this one really made me laugh out loud.

Click on the photo for 5 movie and TV trends you’ll be hating in 2015 If there’s one thing Hollywood loves, it’s doing the exact same thing over and over again until there is no… 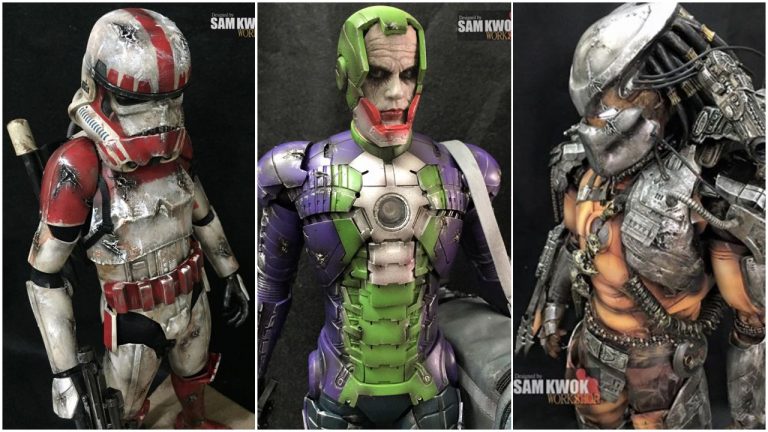 When children receive their favorite action figures there’s usually no additional work being done on them.  They open the box, play with their figure until they get tired of it, and move on to the…

(click to enlarge) Time to play another fun installment of “name everything in this picture.” Today’s items to be identified are not characters, the way they usually are, but rather an assortment of weapons from…

Apparently there’s been a big cry from gamers to see Guardians of the Galaxy in 8-Bit form.  Sure enough, 8-Bit Cinema has given the people what they want.  In this video you can see Guardians…