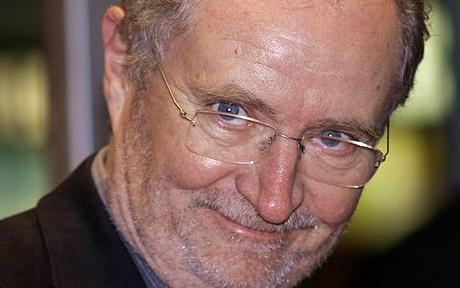 I was trying to place Jim Broadbent in my head and honestly had a tough time doing it.  Then I realized that the guy is in the Harry Potter movies as professor Horace Slughorn.   However upon further research I realized that was cutting Broadbent extremely short.

Jim’s been around for quite some time.  Broadbent is an English actor and he’s got 124 titles to his name.   But that doesn’t include the tons of work he’s done in the theater.  You guys might know him best from films such as Gangs of New York and Moulin Rouge.

He’s got a strange face and it lends itself to weird character roles.  And of course he was in Time Bandits!  Check out a clip of Broadbent after the jump…

Here he is winning a Golden Globe back in 2002.

It appears the economy is so bad, that we’re actually turning to the Dark Side of the Force for assistance now. This explains why Darth Vader showed up to ring the opening bell at the…

For those of you unfamiliar with Denis Zilber he’s technically called an illustrator.  I say the man is an artist and he has a unique way of portraying certain TV characters and life situations.   Most…

httpv://www.youtube.com/watch?v=N3lKI83zN2k Here’s a rather interesting idea that has Nolan’s Batman trilogy set up like the three acts of his other recent, fantastic film, The Prestige. The concept is that each movie represents the different parts…

Via Geektyrant:  We often think of superheroes as the kinds of characters who have a line-in-the-sand approach to killing, but the Marvel heroes have always been a little edgier than their DC counterparts in this…

April Fool’s Day is still a good while away, but until then, here’s a joke from a past year I thought was rather clever. It’s a series of “Ocean Fact” comics that National Geographic put…