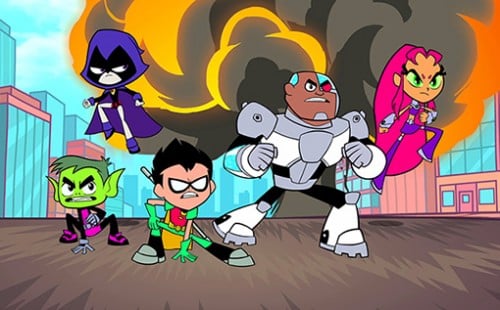 Now here’s a show that I expected to hate. That I had every reason to hate. That I actively wanted to hate.  But every once in a while, a new twist on an old property surpasses all expectations and brings something really new and unexpected into your life. Teen Titans Go! has gradually become one of those shows for me.

Cartoon Network’s DC Nation block has had a bumpy ride for reasons that don’t seem to be clear. Chalk it up to more general DC WTF-ness, I guess. What the hell is going on with that company, anyways? DC Nation was a pairing of two shows based on DC comics mixed with stylish comedic shorts from various creators. It was a pretty great formula.

The inaugural shows were Young Justice and Green Lantern, both of which were pretty amazing. Teen Titans Go! were among the weaker weekly shorts that aired during the block. An amusing homage to the divisive cartoon, but nothing to write home about. Fans were not pleased when the two beloved shows were suddenly canceled and word had it that Teen Titans Go! was being promoted from shorts to full series to join the CG animated Beware the Batman, in which Alfred was a gun-toting football hooligan and Katana was now the sidekick. Who would do such a thing?

The original mid-00’s Teen Titans cartoon was a divisive experiment in style. Breaking from the DC Animated Universe formula that yielded classic series after classic series, it added an extra layer of cartooniness and featured heavy anime comedy influences, plus it significantly altered the personalities of many of the characters, making them almost unrecognizable from their comic book counterparts. 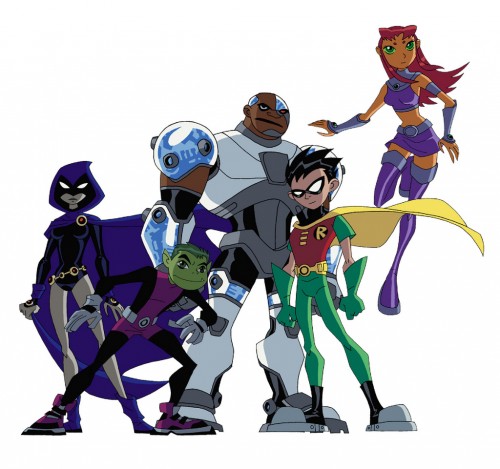 A lot of people never gave the show a chance because the kiddie anime style turned them off, but it turned out to be pretty damn great once it got rolling; arguably better than its source material, in fact. Teen Titans Go! seemed like a stupid idea from conception. You take all of the things people hated about the original show and crank them up to absurd levels while alienating existing fans by taking away the great storytelling and making the characters parodies of themselves. How could this possibly work?

I ended up checking it out because I felt like I should give it a shot. I mean, it’s comics, right? With each episode only clocking in at around ten minutes, it wasn’t really a stretch to find the time. The first few episodes didn’t exactly set my world on fire, but at one point my son took an interest in the show.

Now my son is a funny kid. He’d seen every episode of Batman: The Animated Series before he was able to speak (he would lead me to my DVD shelf and point at my boxed set until I complied). By the time he made it through Superman and on to Justice League, his main commentary was “ha ha, Superman” whenever Big Blue got wrecked. You don’t know what paternal love is until you’ve mocked a true icon with your toddler. But at some point he stopped wanting to watch the same cartoons as his old man, so it was a surprise to me when he latched onto this one.

Teen Titans Go! has since become a rare father-son ritual for us. This is the biggest reason I kept watching it, and I’m thankful for that because good god is this show funny. Once it rebuilt the characters entirely as comedic foils to one another, this thing began to make me laugh like very few shows do anymore. On top of that, it’s probably the single most gif-able thing I’ve ever seen. I’m pretty sure I could spend all day after any given episode making gifs out of it. I mean, the dance gifs alone should make this show worth renewing. Unfortunately, there aren’t very many being made, which is kind of a crime.

Come on, internet. You can do better.

So what the hell makes this show so enjoyable? Well, for starters, there isn’t anything else like it on the air. It’s just the right mix of goofiness, unapologetic absurdity, charm, and cleverness at the same time and is full of nerd references from all eras. It’s slowly developing a set of recurring in-jokes that most shows would die for. For instance, in one particularly awesome episode, Robin seeks to gain superpowers by fusing his genes with….a robin. Yeah. He ends up a beaked and feathered monstrosity who is good at pecking things while his teammates demand the world’s best chicken dance of him. The bird gained the ability to use a grapnel, which he uses in a later random appearance to steal a kid’s ice cream.

Teen Titans Go! is the kind of show where an argument about whether burritos are better than hamburgers results in a musical contest, a battery of scientific tests, and finally a full-on kaiju battle between the two foods. A show where mentioning VHS requires an explanation because kids these days, amirite? A show where two characters can spend an entire episode in a contest to communicate only using the word “waffles” -even when being brutally interrogated by a villain -and the best way to avoid the wait until next Christmas is a year-long coma.

And then there are the pop culture and DC references. Given the insanely cartoonish nature of the show, referencing Nolan’s gritty Dark Knight trilogy is not a thing you’d expect to happen. Or I would have thought that if there hadn’t been a library poster in the background of one scene with an angry Batman demanding “Swear to Read!” You just heard Christian Bale’s death metal growl in your head, didn’t you?

Would old-schoolers ever expect the Wonder Twin powers to activate again? It happened, but seeing that all Zan can do is turn into water, he got to be the Titans’ receptionist while Jayna took Beast Boy’s spot on the team. A recent episode recited lyrics from the Duck Tales theme and oh, Raven is a brony (or pegasister if you like). Yes, the harbinger of gloom, doom, and dark magic/best Titan is hilariously obsessed with ponies and I’m okay with that.

Speaking of Raven, remember her dad, Trigon? You know, the ultimate demonic big bad in the original series; apocalyptic enslaver of worlds? That guy? Well in this show he shows up to visit wearing a preppy get-up in a sitcom parody complete with laugh track. He also grants wishes, like so.

So begins my cavalcade of clips. Also, I kind of want a dog head for a hand now.

I’m sorry, but that is just win. Another great episode has Robin betting his teammates that they couldn’t make it a day without using their superpowers after they begin abusing them by doing things like destroying walls to avoid walking all the way to the door. Turns out, maybe Robin’s way of doing things wasn’t as hard as he thought.

The destructive power of an angry kitty is not to be underestimated.

But my favorite episode has to be the one where Raven manages to spread her love of reading to her teammates. It’s a top-to-bottom hysterical tribute to reading for the fun of it and at the same time, a spot-on satire of people like myself who overanalyze and often overcriticize fiction, taking all of the joy out it.

Sometimes I do kind of wish I could bust a wicked freestyle instead of torturing innocent Unreality readers.

One hallmark of great entertainment: there is ALWAYS room for a musical number. Whether it’s Beast Boy serenading Terra as a guitar-playing reggae cat or Starfire and Raven rehashing the original Puffy AmiYumi Teen Titans theme to cheer on the boys’ dodge ball team together, you’ve got to love it. But I don’t know if there’s any beating Cyborg’s soulful ode to his would-be sidekick, Brother Blood’s torture machine who can only say “pain” and “all I know is pain”.

I don’t know where the hell they come up with this stuff, but I love it. With Beware the Batman meeting an early demise, Teen Titans Go! is officially a DC Nation of one, but I think it’s actually become my favorite out of all of them so that’s okay. It’s the only show like it that I’ve ever seen and it somehow manages to pay tribute to the original show while parodying it at the same time.

Season one is coming to a close after a whopping fifty episodes in a year. Even considering the brevity of each episode, in terms of idea prolificity it puts to shame most other animated series, who often have trouble managing thirteen episodes for one storyline in that time (I see you over there, Archer).

I don’t know how long they can keep that pace up for, especially considering the original series only had sixty-five episodes total across four seasons, but for the time being I’m hooked. Teen Titans Go! brings me back to the old days with my dad and my friends watching Looney Tunes together, except instead of singing “Kill the wabbit” to the tune of Wagner’s Ride of the Valkyries, it’s my kid and I chanting “Eat! Eat! Eat the meatball!”

The meatball is TTG. You are Raven. You know what has to happen.