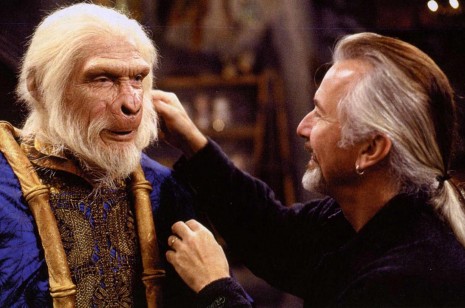 So, my first ever article on Unrealitymag was a piece on iconic practical effects wizard Stan Winston. Nobody defined our childhood creatures as much as he did, but there’s one guy who’s come close. His name is Rick Baker, and although he doesn’t have as many great characters on his resume as Winston, he’s certainly done some equally brilliant work.

Don’t believe me? Well, I’ll show you six movies he (and his studio) worked on that are better for it. 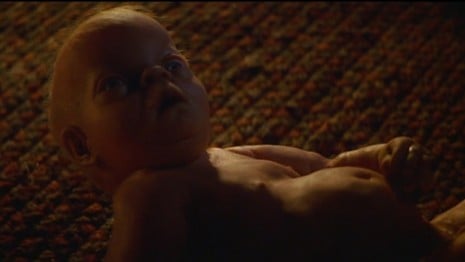 First of all, if you haven’t seen this movie you really should. It’s a surprisingly sincere offering from legendary eighties director John Carpenter, in which Jeff Bridges plays an alien who takes the form of a woman’s dead husband. Not a ton of special effects, but Rick Baker stepped up to the plate for one key moment that will knock your socks off.

The scene in question is the alien’s transformation into Jeff Bridges. In terms of screentime, this is a relatively small bit of the movie, but it makes a huge impact on the way the audience feels about the character. We have to realize that he’s completely alien, sure, but it also has to walk a fine line between grotesque and understated. This is, after all, a relatively low-key, tender movie. Too little, and you have a decent movie with a stupid scene that wrecks the beginning. Too much, and you’ve just opened your eighties feel-good story with a scene from The Thing.

Here’s what Baker gave us:
httpv://www.youtube.com/watch?v=4JXYWEEjDIs

One of the things you’ll realize over the course of this article is that Rick Baker makes the best damn transformation scenes in the history of movies. 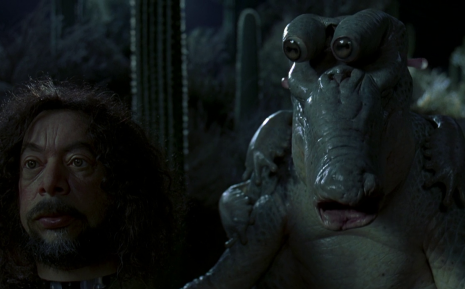 Men in Black may well be the most nineties movie ever made. Will Smith spitting sarcastic one-liners wearing an orange windsuit ALONE puts in the top ten. It wouldn’t be hard to argue that the nineties were the apex of practical creature effects, either. After all, as previously mentioned, this is the decade that brought us Jurassic Park. Rick Baker’s work on this movie isn’t exactly Jurassic Park, but it’s certainly iconic in its own right. Let’s go down the list: 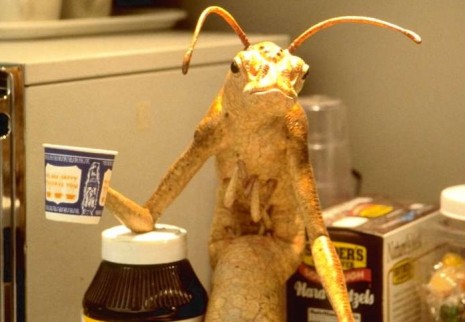 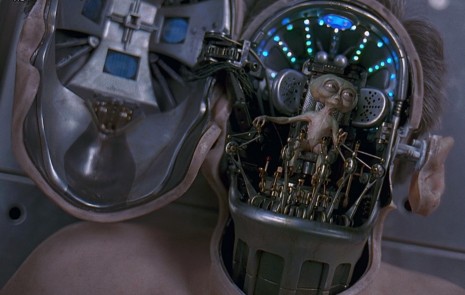 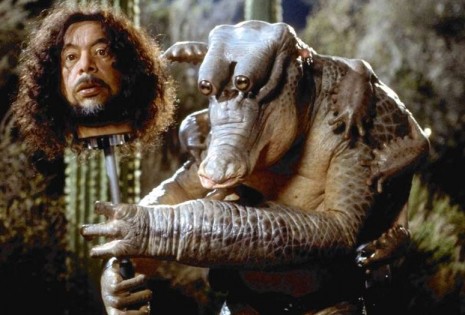 “Mikey” from the opening. 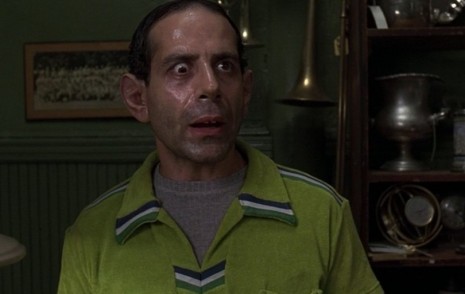 And even the enhanced weirdness of Tony Shalhoub as Jeebs.

This is only my take on things, but I suspect that Men in Black wouldn’t have been quite the nineties centerpiece it is today without Rick Baker’s contributions. A particular favorite of mine is Mikey, who looks the perfect mix of alien, menacing, and caught in the cookie jar.

Planet of the Apes 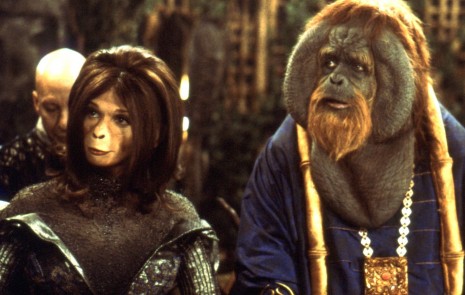 There’s a lot that’s memorable about the original Planet of the Apes. Bits of dialogue, the ending,  and even the music are all instantly recognizable. But aside from a couple of lines and that immortal ending shot, the most iconic element of that movie was its superb makeup effects. Tim Burton’s failed 2001 reimagining lacked a good answer for almost all of the great things about the original — the only exception being, of course, the brilliant makeup Rick Baker brought to the table.

Revolutionary though the prosthetics in the original were, Baker’s work sets a new standard for the human-animal hybrids of the movie theater. Not only are the 2001 apes faces fully expressive, not only do they draw even clearer distinctions from species to species, but they even bear a surprising resemblance to the actors inside them from time to time. The digital getups used in the shockingly good prequel from last year were revolutionary as well, but Baker’s genius work shouldn’t be forgotten, even if the movie it’s in probably should.

I… I don’t even know where to start with this movie. Do I lead with the stomach vagina James Woods uses to store a pistol? The living, breathing television set? The firearm that grows tentacles and attaches itself to its owner’s wrist? (Probably the stomach vagina.) This movie is flat-out nuts, an eighties cult horror icon, and it’s hard to imagine it having the same power without the absurd creations Rick Baker built to bring writer-director David Cronenberg’s lurid fantasies to life.

There’s a ton that could be said about Videodrome’s effects (and much more about the movie itself), but in the interest of brevity I’ll just focus on how well Baker blended organic and mechanical matter. The television is a great example — in some scenes it looks like an independently thinking machine, while in others it looks more like a television-shaped creature of sorts. Videodrome’s technology becomes flesh, its flesh becomes technology, and Baker does a bang-up job of keeping track of the whole mess…

Actually, let’s just sit back and watch one of these creations. Skip to 2:00 if you just want the Baker side of things; watch from the beginning if you’ve got the time. Or just go watch the movie again (I really like Videodrome, by the way):

An American Werewolf in London 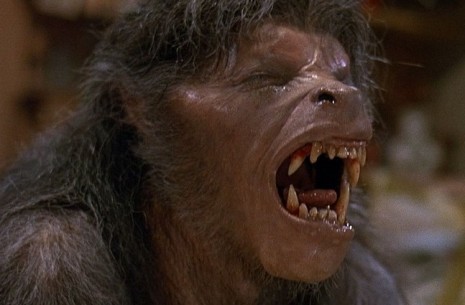 Videodrome is what it is, but there are only a handful of scenes in American cinematic history that can compare to the transformation scene in this iconic werewolf flick from 1981. For me, the only comparably good ones are from The Wolfman a couple years ago — which, funnily enough, relied heavily on makeup effects provided by Rick Baker when they weren’t resorting to CGI. Anyway, when you can come up with a practical effect that goes virtually unchallenged for almost thirty years, you know you did something right.

Before I go on, it would be helpful to remind you how great this scene is:
httpv://www.youtube.com/watch?v=n9QPouW-XZ4

There’s something very unnerving about how realistic that stuff looks. Whether it’s an elongated hand, a morphing face, or a pair of ever-stretching ankles, you know this is about as uncomfortable as turning into a werewolf is ever gonna get. Unless you’re tearing your own skin off like in Van Helsing, but you know.

Harry and the Hendersons 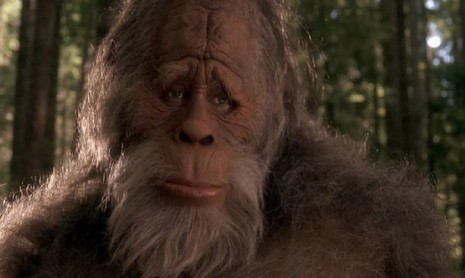 Rick Baker himself has said this movie is one of his proudest achievements, so I’d be remiss if I didn’t put it pretty high on here. And it’s an achievement well worth being proud of. Harry is an impressive achievement; a believable Bigfoot who’s obviously out of place among the human characters but always feels like part of their reality. Rick Baker’s designs allowed this unlikely creature a shocking range of expression. Check it out:

Monsters and transformations are a challenge in their own right, but it’s incredible to me that a character made of rubber and foam and fake hair can feel like such a real creature. In that scene, Harry goes from impulsive, to happy, to confused, to angry, to curious, and more. I bet if they actually found Bigfoot, the real thing wouldn’t have that much range.

Rick Baker’s another one of those guys who’s nearly impossible to pay tribute to in less than 2,000 words. He has some really great jobs — including things like The Ring and Hellboy (though for the latter it’s unclear to me how involved he really was) — on his filmography . The man is a living legend. I can’t wait to see what he does next.

When you’re a kid, old people are pretty lame. They’re slow, they don’t smell like the rest of us, and some of them are related to you. But here’s the lamest part: while you grew…

(click to enlarge) Ever since I saw Drive last year, one thought crossed my mind. I want that Jacket. Whether it’s for Halloween, or everyday life, I thought I must have it, and I will…

I don’t spend too terribly much time on Flickr, but I recently did discover a photo collection that I browsed through for quite a while. It’s called “Growing Up Star Wars,” and it invites people…

httpv://www.youtube.com/watch?v=ozG6KQftTmc “What if we just call it something normal?” “What do you mean?” “Fast and Furious 6.” “It’s so simple it’s…genius.” So that’s right, after The Fast and the Furious, 2 Fast 2 Furious, The…

To be sure, a lot of Hollywood movies, both big and small, are written specifically for a particular actor or actress to play either the lead role or a significant supporting role. This especially rings…

Whoops. I thought that by seeing over 60 or so movies this year, including nearly all of the “best” ones, I was in fair shape to write my Top Ten of 2011 list. Sometimes I’ll…