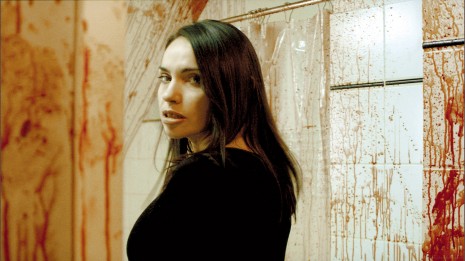 It was a knock on the door, same as any other knock. Nothing indicated that opening the door would be any different this time than the thousands of times I’d done it before. It was late, but I paid no mind and opened it. It was only open a sliver when a  man in a grey, tattered ski mask kicked it, sending me careening to the floor. Two other men pushed in after him, and he shut the door behind him, clicking the bolt into place and stepping one muddy boot onto my chest. They smelled of stale cigarette smoke, and were muttering between themselves for a moment before they pulled me to my feet.

” We hear you like to talk about movies” one of them said to me, in a voice stuck somewhere between sounding like a scared child and a disaffected man. Before I had a chance to answer, I was being dragged into the living room, where I was thrown to the couch.  The sizes of the three men seemed to differentiate wildly, and they seemed as skittish as they were scary. “Yeah, I like to talk about movies…” I muttered, as they were tying my hands behind my back, and messing with my TV. “What is this all about?” I asked, more scared than my voice was letting on. The biggest one cocked his head, looked in my direction, and said ” So what do you think about home invasion movies?” And just like that, all three of them started to laugh. I sank into the couch, knowing this may very well be my last few moments alive. Well, if these guys want to talk, I can talk. I will talk them to death if I have to. And with that insane thought, I began rambling.

I jokingly said “You guys know I’m not pregnant, right?” and none of them laughed, so I knew they hadn’t seen this gem. “Phew” I said. “Because in the movie INSIDE, there is a home invasion that begins JUST LIKE THIS, except it is about a woman who wants another woman’s unborn baby, AT ANY COST!” I heard the smaller guy clear his throat to chime in, and all I thought to myself was: Don’t let these f*ckers come up for air, so I cut him off before he began to talk. 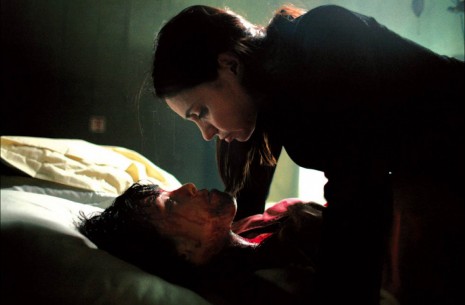 The antagonist in this film, played by Beatrice Dall, is the scariest woman ever put on celluloid.

“Yeah, you find out later the crazy woman’s motive, but initially, it is just French horror at its most extreme! The palpable sense of dread you get as the unrelenting pace of the movie beats you down is without peer in the modern horror genre. A tough subject matter, no doubt, and the violence in the movie is some of the most graphic and realistic I have ever seen, but still, when you bring up home invasion movies, Inside is on a level by itse….” And before I could even finish the sentence, the wiry one ,who was pacing around my living room, felt compelled to add his two cents: DID YOU SAY IT WAS FRENCH??!!! You want us to READ our movies?!!!

“Yes, French horror is as good as it ge…”

And before I could finish, the big one hit me on the side of the head with the butt of a gun he had concealed up that moment, knocking me unconscious.

I don’t remember much, but as soon as I came to, I started talking again. The side of my head was throbbing, and my vision was still a bit blurry, but I fought through it. “Yeah, sorry. Reading movies SUCKS!” I said and laughed to overcompensate, praying these guys didn’t know me enough to know I adored foreign horror, French and South Korean most of all. ” How about FUNNY GAMES!  I blurted, without thinking. Ah, Funny Games, my old fallback.

Ten it hit me, an angle I could use. “Thank God Heneke remade his original FOREIGN version for the US, because FUNNY GAMES kicked ass!” I realized right after I said it that the whole sentence seemed forced and faked. It almost sounded rehearsed.

“That’s the one with the dog scene, right?” Said the quiet one, who had been sitting the whole time. 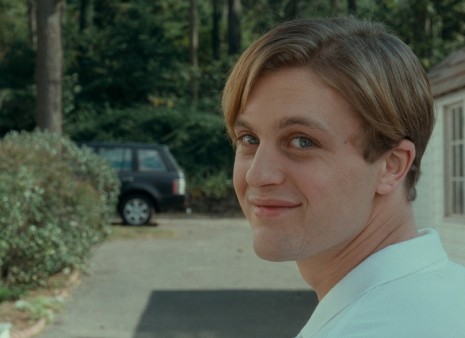 He wants to know if you know where the dog is. Well, do you? Answer him!

It was at this moment that the brevity of my situation flooded me. They “love” this movie? That cannot bode well for how this is going to end for me. Then it dawned on me that they were all wearing hoodies…

I began to wonder how old these three were. I used to work with special needs kids, and one of my first clients was a kid that was six foot, five inches tall. No joke. So age and height are not representative of each other at all.

So now, I am sitting there, with these three around me, and I am wondering just how old they are. I wanted to ask them if they had seen THEM, which was called ILS when it was initally released, but I didn’t. I sat there and thought about it. Probably deeper than I should have. “Foreign horror again, you idiot! ” I thought to myself.

You think you understand a person’s capacity or reasoning for wanting to hurt others, but you have no idea.

I began to get a second wind, albeit it only to myself. None of the three had gotten up to explore any other part of my house, so I was realizing this had less to do with the house, or these people, and more to do with me.

And I thought about Ils again (Spoiler Alert). What if these really were just kids, f*cking with me. Fans of the site or something. I could easily beat the shit out of three teenagers. I am a beast, I am the Red Dragon. Wait a minute, no I’m not. I’m some internet journalist, tied to my couch, about to be killed for no reason. Don’t forget Rem, things did NOT end well for the couple in Ils, either.

So now I had to think differently. And it hit me.

“You know what scene I LOVE in Watchmen?” I said, out loud, looking around at all of them. I responded to my own question before they could derail where I was going.  “The scene where Rorschach messed up those inmates in line, who are trying to scare him, and he says: I’m not trapped in here with YOU. YOU’RE trapped in here with me!” And as soon as I finished my thought, I laughed a little. Ah, adrenaline, this was good.

“WE SAID HOME INVASION MOVIES!!!” The big one said, and cracked me on the temple with his elbow. ” I know man, I know..” suddenly I sounded like a weak dog and I didn’t even recognize my own voice. ” The Perfect Host, that’s where I was going. Home invasion movie. Guy from Frasier” I was trailing off, fighting the urge to black out from the hit I took to the dome. 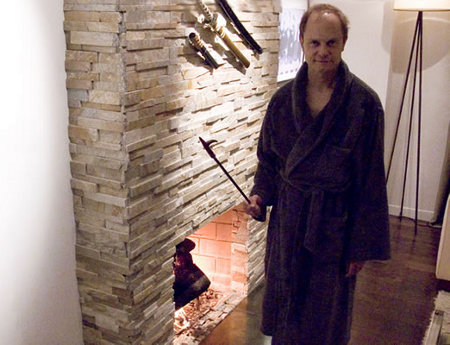 You may question who the real bad guy is in this movie, and there is good reason for that.

” You see, this guy breaks into Frasier’s brother’s house, and tries to do some Home Invasion stuff. We find out he just robbed a bank and is looking for a place to lay low for awhile.” I could see I had their attention.  I kept going. “Thing is, the “bad guy” helps himself to some of the “good guy’s” wine, and, well, it was drugged.” I tell them how the tables are then turned, and the character’s roles are switched completely. How the good guy becomes the bad guy. I can see them nodding, eyes widening even through the masks.

“But there’s another big twist that I don’t want to spoil for you guys.” I mumbled, still sounding distant. I looked up, looking the big one right in his beady, brown eyes and I said ” What’s great about that is the idea that, well, people never fully know who they are messing with. Sometimes, you intend to make a victim, and you wake a demon. ” They looked confused for a moment. I was getting under their skin. Perfect time to begin to reveal cracks.