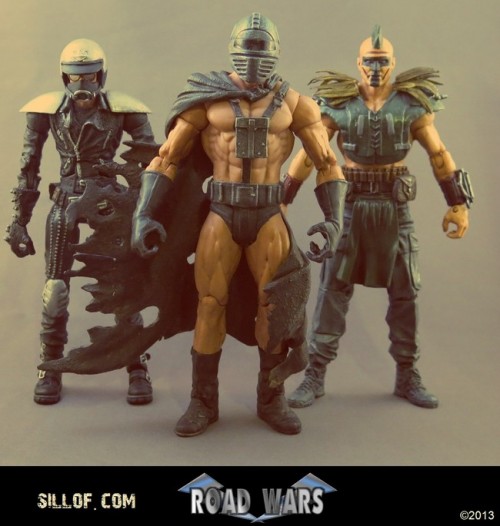 Master toymaker Silof is back at it yet again with ANOTHER masterful Star Wars figurine series taking the universe to yet ANOTHER genre. I though he’d be running out of ideas by now, but he seems to have found his new muse in Patton Oswalt.

The nerdy actor has comissioned him for two full lines now, the first was inspired by Faster Pussycat! Kill! Kill! and now this one is inspired by Road Warrior, aka,  Mad Max. If you saw the picture above and didn’t know what the hell was going on, now you should be to see variants of a Stormtrooper, Darth Vader and Boba Fett, now that you’re looking for it.

But of course, as always, there’s a whole cast of characters and a story of the new series to boot. Check it out below. What’s next, Oswalt? 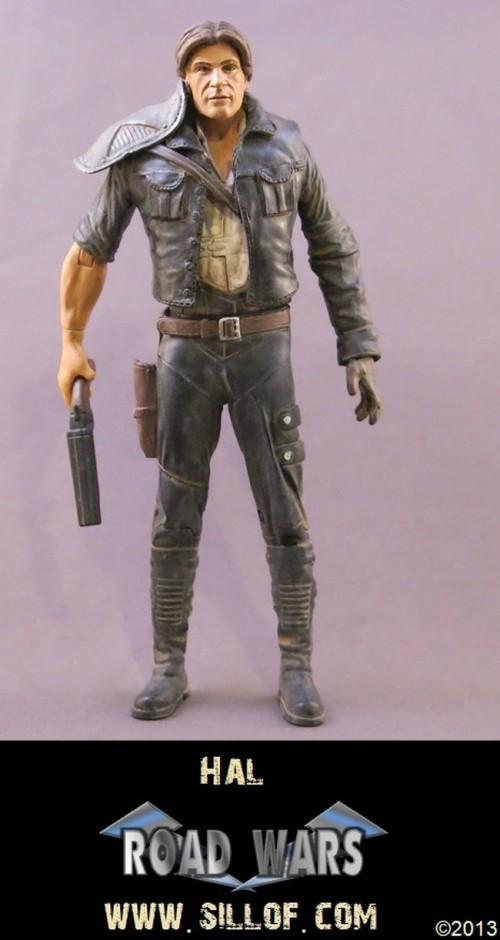 One lone man in the desolate landscape exists between these two divisions of outlaws and bandits.  He makes his living smuggling fuel between various groups and factions then selling his cargo to the highest bidder. 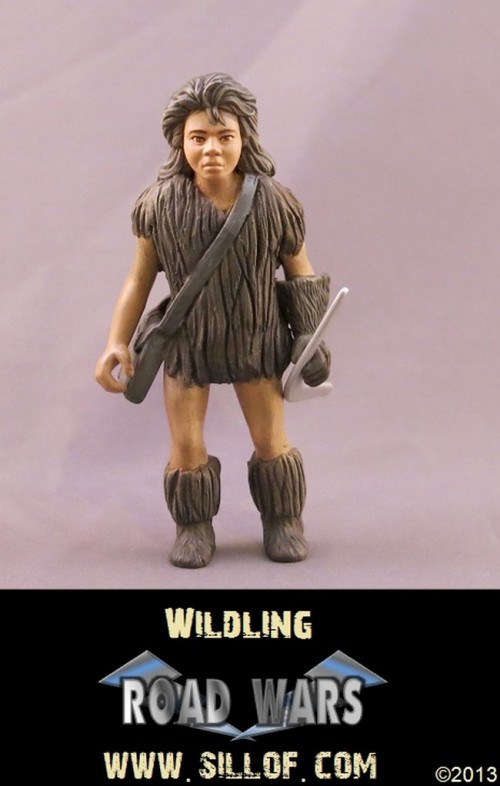 During his pursuit and fight with the gang members, Hal is helped by a small wildling primitive child, who live in the wild in a savage state.  The child creates a connection with Hal who follows the smuggler from a distance. 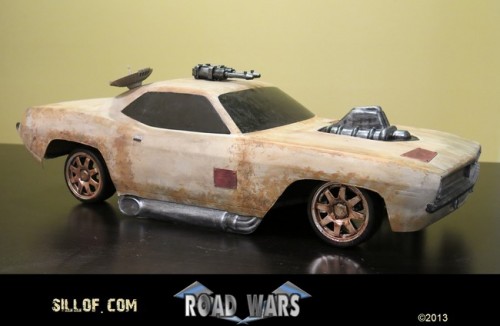 Hal makes his way across the lone empty roads in his heavily modified supped up muscle car that he uses to smuggle fuel and evade the bandits.

Amongst the settlements there are many makeshift soldiers, one of them stands out.  She is by all practical purposes the day to day leader of the village who carries out the suggestions and advice of Obbawanno.  She is a charismatic and has caught the eye of both Hal and the farm boy.   But, she is a strong and a deadly warrior, who has little time for the daydreams of the village youth or the advances of a scoundrel with no sense of allegiance or honor. 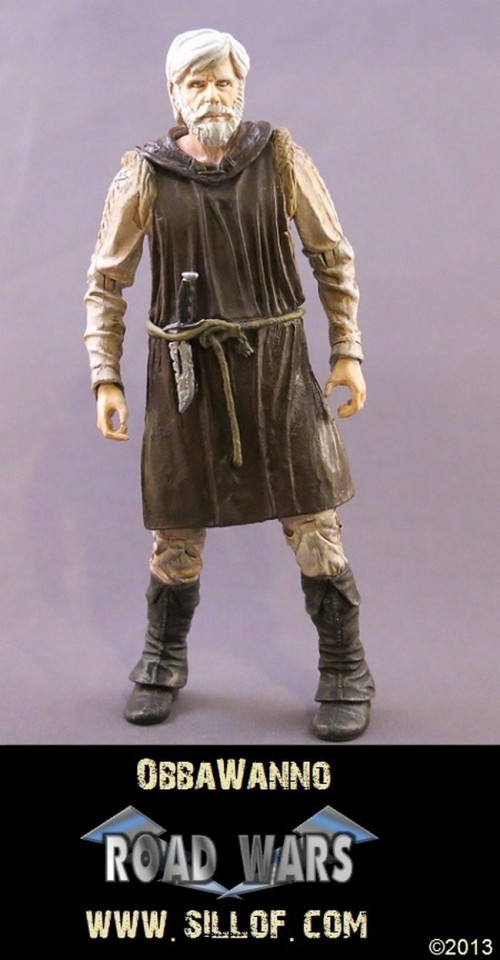 The settlement actually has a small refinery and they are extracting raw crude from the soil  The collective is lead by a grizzled old hermit.  He wants to quickly move the strangers along fearful of a reprisal from the Imperiad gang.  He has tangled with the group in the past.  There have long been rumors of a mysterious past and previous encounters between Obbawanno and the Imperiad leader. 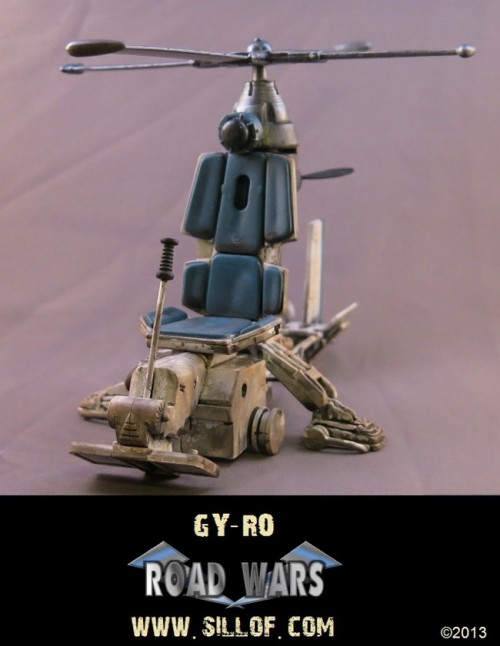 Cptn.’s little friend was his homemade flying contraption called a Gyrocopter or GY-RO for short, that was harnessed to the trailer.  The gang had taken Cptn. and the copter as a prize for their leader.  The engine runs on a new type of synthetic fuel that can be made  and not harnessed from the ground and refined.  Hal fixes the trailer to his car and realizing he has something of value in the two.  Hal took them towards a small settlement with hopes to barter them. 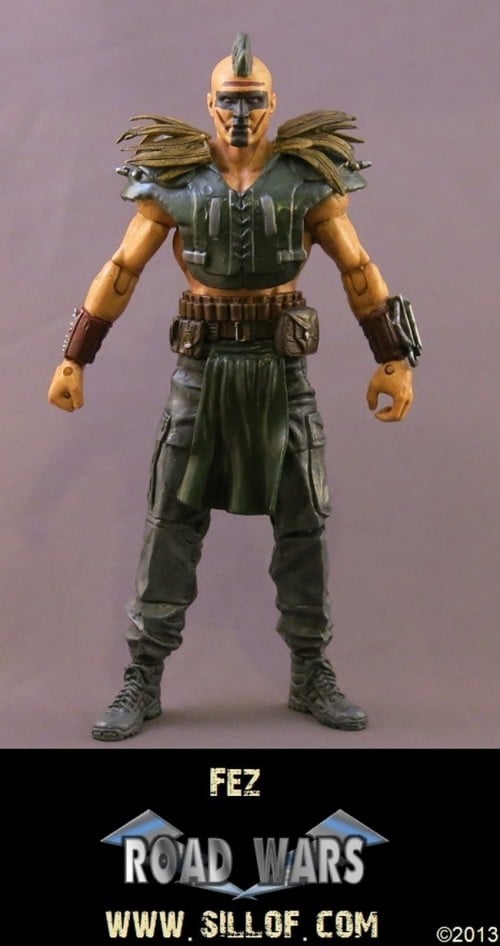 This particular gang of outlaws is being lead by one of the Imperiad’s most psychotic members, a biker known only as Fez.  He does not say much, but he speaks volumes with the violence he unleashes. 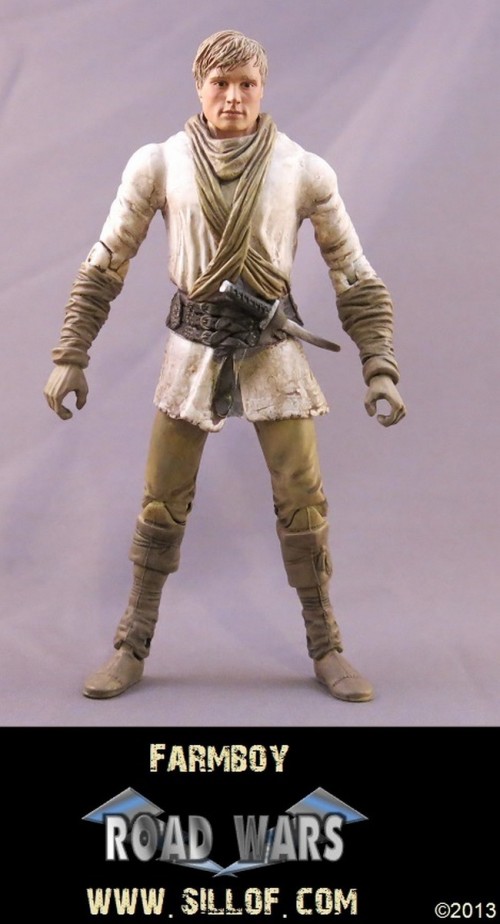 On the way to the settlement Hal comes across a naive farm boy on the outskirts of the settlement who takes Hal, the wildling, the Cptn, and the Gyro inside the makeshift colony.  He is brimming with a wide-eyed sense of adventure and  enthusiasm that is uncharacteristic in this harsh and unforgiving wasteland. 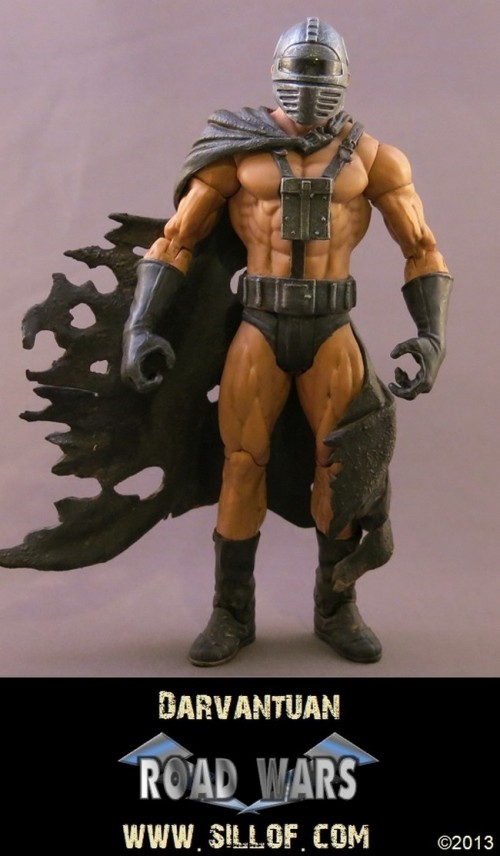 Hal leaves the village with the fuel he exchanged for Cptn. & his GY-RO.  Eventually, Obawanno’s fears are realized when the Imperiad arrives in force lead by the enormous tyrant Darvantuan.  He has brought his lieutenant Fez and their legion of troopers.   The gang lays siege to the small outpost.   Darvantuan is obsessed with getting revenge and this new fuel he had been told about.   In the battle many of the gang and the villagers die.  Obbawanno is killed when facing off against Davantuan alone.  In the chaos of the battle Hal returns as the farm boy ignites the fuel reserves.   He helps what villagers remain and Cptn. escapes in the confusion of the burning refinery. 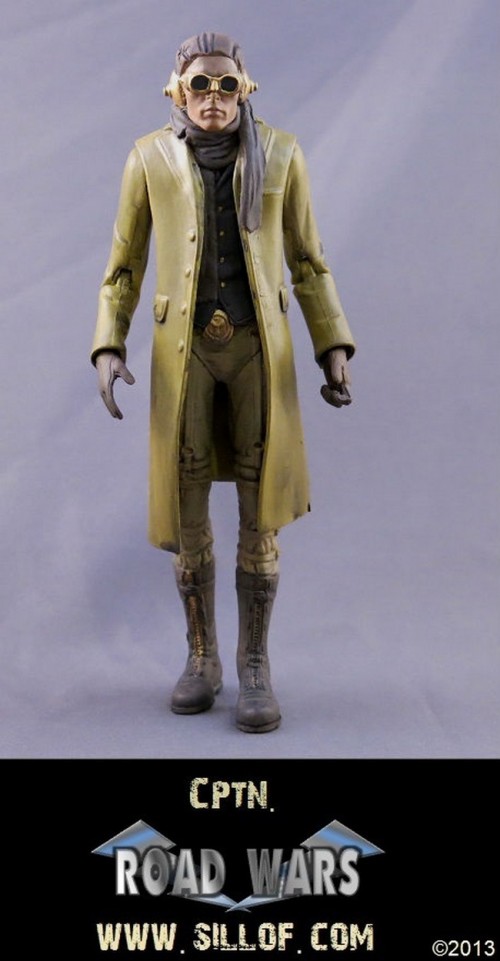 After evading and destroying part of the gang of marauders, Hal begins to scrounge through the wreckage of a large truck owned by the gang.  He destroys the truck looking to salvage anything of value.  Tied up on the back of the truck he finds an panicking odd fellow struggling to get free going on and on about his little friend.  He claims his friend contains a new formula for synthetic fuel. 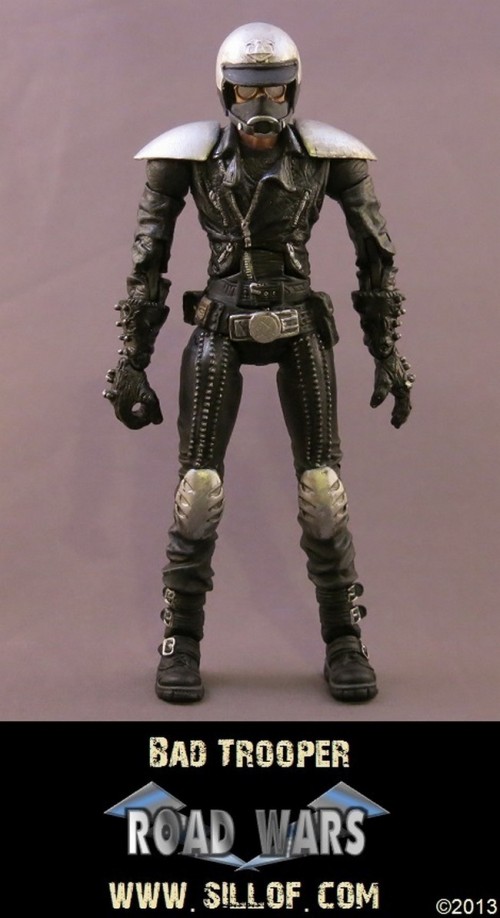 During one of Hal’s smuggle runs he is attacked by members of the most powerful group of bandits known as the Imperiad, part biker gang and part marauding high way pirates.  There riders are numerous and they spread out across the badlands causing havoc and plundering in packs. 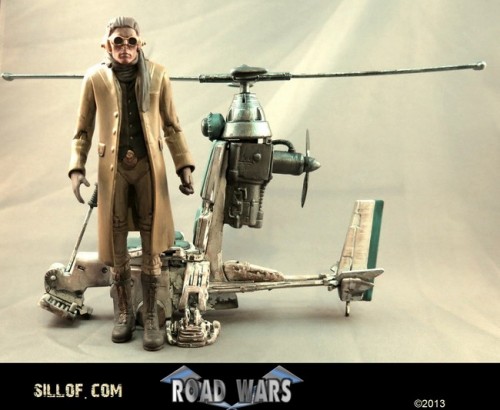 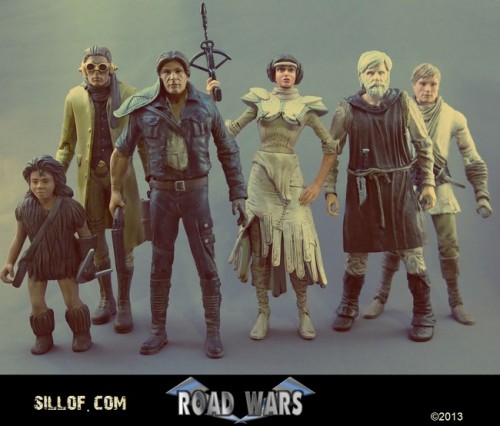 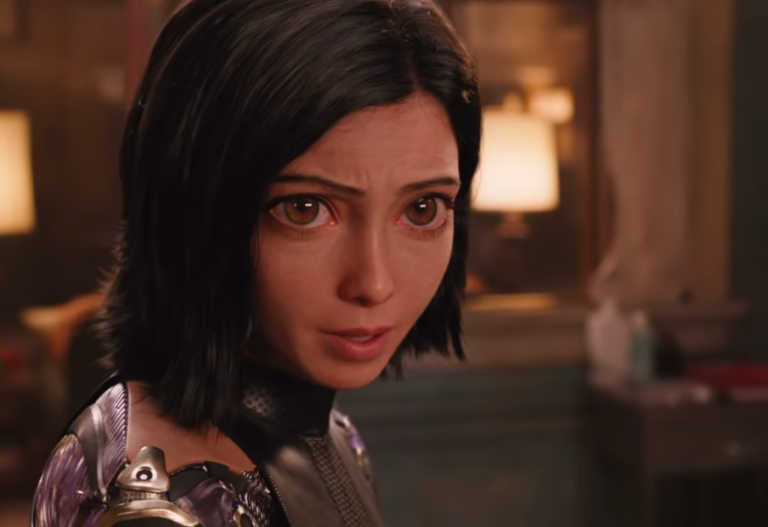