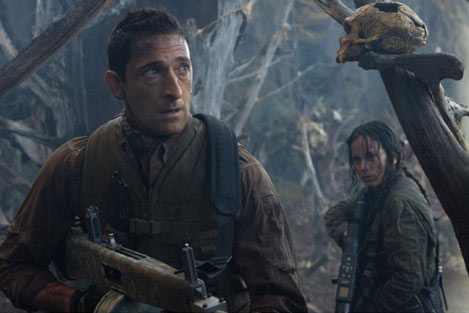 I’ve had pretty high hopes for Predators ever since I read that Robert Rodriguez and Adrien Brody were involved.  After all, these guys are light years more talented and competent than, say, Paul WS Anderson and Steve Pasquale, right?  Predator remains one of my favorite action movies of all time, and although the sequel was decent, it seems that everything Predator-related over the past decade or so has been abysmally awful.  As it turns out, though, Predators is just fine.  It’s certainly not better than the original, but then again, it doesn’t try to be.  In fact, Predators serves much more as an homage than it does a sequel. (Minor spoilers ahead) 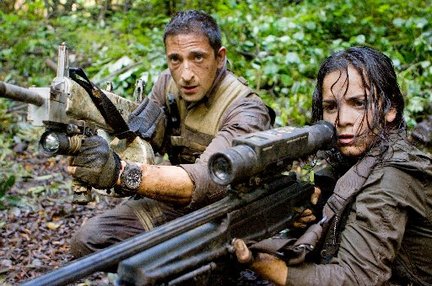 When the movie begins, you’re immediately thrust into the action.  Royce (Adrien Brody) awakens to find himself in a free fall and having no idea how he somehow wound up thousands of miles about the ground.  Fortunately for him, he’s been fitted with a parachute that open automatically, and while his landing isn’t exactly smooth, he does manage to survive the fall.  Soon enough, more unlucky people drop from the sky – including a woman from the Israeli Defense Force, a cartel enforcer, various soldiers, a Yakuza member, and an deadly convict.  The only one who doesn’t seem to fit in with this motley crew of bad asses is a meek, cowardly doctor played by Topher Grace.  The group sets off through the jungle to find out where they are and, of course, why.  While the crew of humans certainly is formidable, there’s no comparison to the original cast of Predator.

Predators then, more or less, follows the formula of Predator.  The group of humans are picked off one at a time while they try to piece together just what’s hunting them.  Stumbling upon a bizarre alien structure, a live, tied-up predator, and a sky that’s filled with bizarre-looking planets lets the humans know that they’re no longer on Earth and in a sh*tload of trouble. 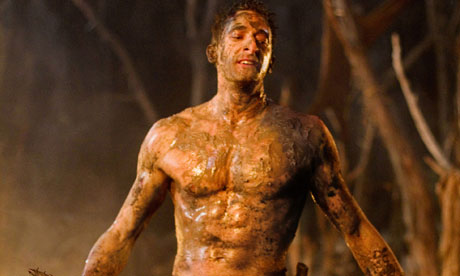 The casting of Adrien Brody for Predators was met with some skepticism, but he manages to pull off the role of Royce, an ex-black ops soldier who currently earns a living as a mercenary.  His off-screen workout regimen certainly paid off, plus he’s got the acting chops to be convincing as a lethal alpha male.  I feel like the role of the female IDF soldier was written solely to have a female presence in this movie (can anyone write an all-male script without taking heat for it other than David Mamet?), but – and I really don’t want to sound chauvinistic -if you’re going to convince me that a woman can kick my ass, writing her as an IDF soldier is probably the best way to start.  After all, women are required to serve in the military in Israel, so kudos to writers Alex Litvak and Michael Finch for doing some research to make this character believable.  The rest of the cast is more or less interchangeable, save for Topher Grace’s doctor and Lawrence Fishburne’s schizophrenic survivor, Noland.

Of course, we don’t go to see Predators to watch a character study; we go for the action, gore, and somewhat secondarily, the story.  The story itself is pretty good, but not impressive enough to vault Predators into the same class as Predator.  Without giving too much away – and you probably already know this from the trailers – but the humans were all selected to be brought to this alien planet because they are the most dangerous people on Earth.  The planet isn’t the predators’ home planet; instead, the entire place is one huge game preserve.  The humans are the game, but so are other alien species brought in for the same purpose.  What’s cool – and what we haven’t really seen before – is that the predators use all the tools and technology they have to succeed in the hunt, including a deadly breed of alien dog that’s used the same way a goose hunter would use a Labrador Retriever.  What’s also cool is that the predators with which we are familiar from the Predator movies are game, too, as the predators hunting are bigger and meaner.  As Noland explains, it’s the difference between wolves and dogs. 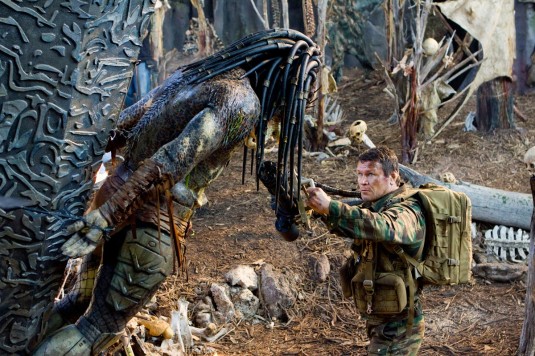 The action scenes are pretty good – gore is of no shortage – but probably nothing you haven’t already seen before.  There’s an interesting mano-y-mano showdown between the Yakuza and a predator, a direct homage to the Billy-predator showdown in the first film.  There’s all sorts of Easter eggs like that scattered throughout the film, and it’s somewhat refreshing to see a film respect its predecessor as much as Predators does.

Ultimately, Predators is entertaining and Adrien Brody helps us take the movie somewhat seriously.  There are times, however, where I was reminded of the Jeremy Piven dilemma in Entourage – he appears as a great actor because everyone else around him is so inept.  Still, there wasn’t really anything laughably bad (save for a few one-liners that only Arnold could have delivered effectively) and it was nice to see an original Predator story that didn’t totally neglect everything that happened in the original film.  In fact, it was the opposite.  Predators is a solid action movie, but far from anything new.

And oh, by the way – the scene in the trailer where Adrien Brody has like 50 of those three red dots aimed at him?  That’s not in the movie.  I hate when trailers do that.