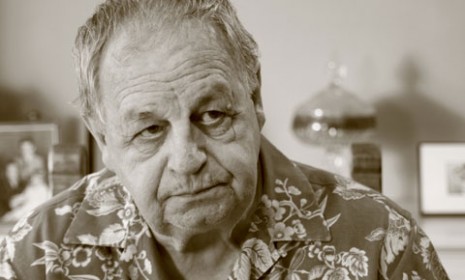 For the 1099th time I found myself watching Sixteen Candles on television the other day.  And while I love Long Duck Dong and The Geek, there’s another character that I think goes unnoticed.  It’s the guy that plays Molly Ringwald in the movie.  There’s just something kind of funny about him.  And I realize this guy has been in tons of movies and in each on there is in fact something kind of funny about him.

His name is Paul Dooley.   First of all with 163 credits to his name clearly he’s worthy of making the cut for this column.  Second of all do you remember how awesome he was as the dad in Breaking Away?  I know most of you are too young to have seen that film but if you haven’t you must.  Basically he’s a blue collar man working at a used car dealership and he can’t stand his son’s obsession with cycling.  It’s a great flick.

Now Paul does lots of TV.  In fact I would say since 1985 the majority of his work has been in television.  Anyway, here’s to you Paul because we always recognize you it’s just that most of us don’t know your name.

Enjoy a classic clip of Dooley after the jump

This is a funny scene from Breaking Away.  Dooley is awesome.

As you know we’re big fans of Pokemon here at Unreality. And as much as we love the games, shows, movies, and other media associated with the franchise, we can’t help but to love all…

httpv://www.youtube.com/watch?v=qkM6RJf15cg I am NOT being paid to post this, but I did want to showcase this Internet Explorer commercial that’s an…interesting new direction for its ad campaign. Between this and their own Tumblr, their new…

Tetris has remained, and will always be one of my favorite games of all time.    I almost feel bad for the creators of Tetris. Not because they came up with an amazing concept but do…

I love Pokemon cosplay as much as the next guy, but we’re moving into unsettling territory here. Japanese site Milanoosells a series of skin tight bodysuits for…unknown purposes that encompass all manner of pop culture…

I happen to be Jewish so I’m a little biased in terms of my non beliefs but let me tell you something:  If I see Jesus swooping in on the wings of Falkor I will…

I think this was originally supposed to just be a picture/headline pun, but it most served to remind me that there wasn’t much of anything the awful, awful fashion of the ’90s couldn’t make worse….