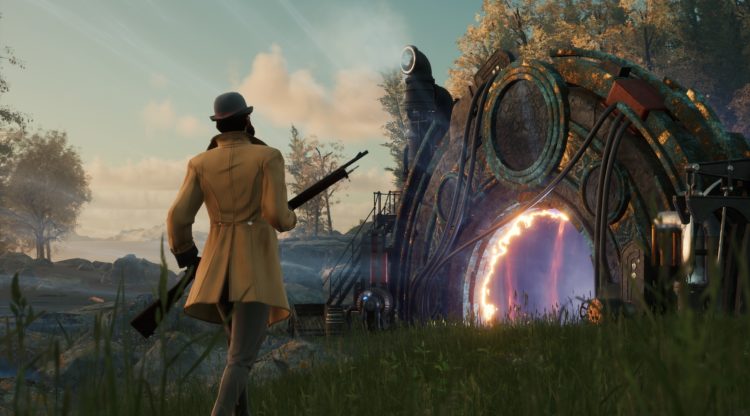 Nightingale is set in a fantastical realm that’s laced with Victorian undertones, magical properties, and mythical beasts. Comprised with a slew of experienced developers forged from the mills of BioWare, Inflexion Games is a new studio jumping into the shared-world survival crafting sub-genre. With massive games like; Knights of the Old Republic, Dragon Age, and Mass Effect under their belts, this new title is being made by some heavy-hitters. The story is about a future setting taking place hundreds of years after humanity was gifted with the hidden science of mystical arts from fantastical beings called “The Fae.” A select few people were allowed to have access to this magic, which the city of Nightingale houses. This city is the most concentrated place in the world regarding these arts, in which portals are sheltered that transports people to the realms of the Fae.

Circumstances went afoul one day, causing the portals to shut down. Being one of the “Realmwalkers”, players will find themselves trapped in a mysterious and dangerous place, unbeknownst to knowing how to utilize magic. The entire concept of magic is still very new and alien to people. Players must discover the fundamentals of this new way of living in order to survive. The entire idea behind Nightingale is showing how the human race adjusts to an evolution that happens overnight. It always comes with “growing pains” of sorts and enduring such a monumental task is a testament to the tenacity of the human spirit.

Way of the Fae

The sole concept of Nightingale is people teaming up and finding ways to overcome ever-increasing odds. With each realm, the basic goal is scouring the area for resources and finding a way to reignite the busted portal system to get back home. Each map will have particular loot, creatures, characters, and elements to discover. Some NPCs will be slain in order to make progress, while others can become friends if players approach them a certain way. It is entirely possible to venture out into these landscapes alone. Of course, the ideal way to play this game is with friends, which is very similar to Minecraft and others. The initial step when starting a playthrough is establishing an estate. With that, players will be free to build up their property at their own leisure. Naturally, there will be a progression system that is catered toward molding a character any way a player chooses.

The developers are trying to make a survival-crafting game that also has a compelling story accompanied by rich lore. This is a tightrope to cross, as making an RPG and crafting a survival game are somewhat different animals. Dragon’s Age and Mass Effect lean toward making choices that come with consequences. Even though Nightingale will have a core story arc that will be the backbone, making subtle decisions during a playthrough will have weight during a playthrough. The main goal is to make this game a survival-crafting title that will always offer a plot point to indulge in.  The main appeal is the fact that players can weave their own stories and set off to partake in their own adventures. Even though this game is taking place in a magical world, there is still a semblance of realism that players can relate to.

The motif that Nightingale is going for is a gas-lit alternate Victorian setting that’s layered with mute gothic details. It’s an appealing look that gives this new game a sense of freshness. This game appears to be played from a first-person perspective and the standard tools and weaponry will be fairly basic. Bolt action rifles, shotguns, pistols, and axes were shown in the trailer. This gives an “underdog” feeling to the situation, which forces players to make really careful decisions when trekking across the maps. When it comes to upgrading, the developers want the players to feel compelled on studying and mastering the art of magic. This is where the most powerful methods of combat, discovery, and defense can be used. Mastering magic will also enable players to discover new areas, upgradable survival skills, and open up new narrative arcs.

It’s not to say that Nightingale won’t have combat, because it will. There is an assortment of mythical and dangerous creatures lurking about. Even though hunting will play a pivotal factor, it’s important to know that players won’t be on top of the food chain. Giants exist in these realms, along with pre-historic-looking beasts and strange hybrids called “the bound.” Even though this game is mainly going to be a co-op experience, there are currently no plans for a PVP angle to it. It will be more of a PVE game. It seems that players will be busy building and defending their towns from sieges coming from the creatures that dwell in the Realm of the Fae. Speaking of which, there will be open servers available where players will be able to jump into other realms and join in on other adventures. The developers want this game to truly be a shared community experience worldwide. The crafting in this game will be wide and varied. Players will be able to build everything from simple little camps to fully realized European towns.

There is still a lot to mention about Nightingale that will prop it up to being something special. However, since there will be early access available later this year, maybe it’s best to have it speak for itself. The developers are striving to make this title a perfect blend between it being an RPG and survival-crafting. It is an interesting choice to make and it may very well pay off. This new IP is scheduled to be released sometime this year. So far, everything seems to be coming together rather nicely, and hopefully, there won’t be any setbacks. The developers will be releasing some new information soon to keep players in the loop on what is going on. Nightingale is expected to be available for PC upon launch, but will most likely be coming to consoles later.