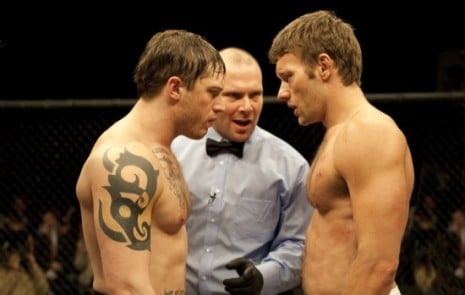 Even though I watch and review 1-2 movies a week, every week, there are some that slip through the catch that I don’t manage to see in theaters. One of those was Warrior, the MMA film with Joel Edgerton and Tom Hardy that I skipped because I thought it looked a bit cheesy, but I heard many, many good things about it since, so I decided to watch it yesterday.

It’s an emotionally powerful film, but almost manipulatively so. I had thought going in that it was based on a true story, but as I watched the plot progress, I realized that there was no way this was possible. (Spoilers ahead for those who haven’t seen it). Two plotlines run parallel to each other, one follows Edgerton, playing a physics teacher and former average UFC fight who goes back into the ring when he’s about to lose his house. The other has Hardy as an Iraq war hero and former high school wrestling champion who reunites with his once-alcoholic father to train in MMA once more. The two both enter Sparta, a tournament of the best 16 MMA fighters in the world with a 5M grand prize. Oh, and did I mention they’re brothers?

If this was indeed a true story, I would have been more impressed, if not entirely blown away, but as it’s all invented, the unrealisticness of the plot just SEEMS like fiction at every turn. You’re telling me that a retired, almost forty year old, barely .500 MMA fighter can train years later to become one of the two best fighters in the WORLD in eight weeks? The same goes for an emotinally scarred, heavily drinking ex-soldier who hasn’t trained in who knows how many years, but he’s able to become a top contender in under eight weeks as well. Not only that but he DECIMATES every opponent they put him up against, knocking out seasoned lifelong fighters in mere seconds with presumably PTSD inspired and alcohol fueled rage. 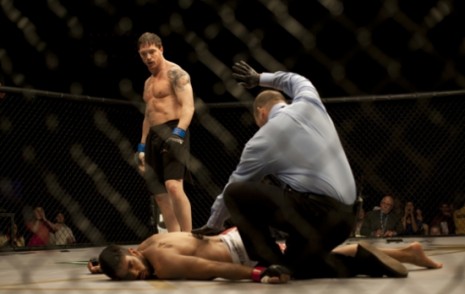 The Legend of Drunken Master.

I appreciate a good underdog story, and this is two of them in the same package, but it’s too much. It’s like watching a movie where a former high school quarter back picks up a football and becomes superbowl MVP after training for two months. As inspiring as that may be, there’s no way on earth it could ever actually happen. Such is the case with both of these plotlines, and the fact that each occur in the same film is doubly ridiculous.

It’s an emotional movie, it is. The final fight between the two brothers (of course they both make it to the finals, as they showed in the freaking trailer), is in fact heartwrenching, but with that build-up, how could it not be?

Warrior isn’t a bad film, it’s just a bit far-fetched and manipulative if you ask me, and I’m not so sure if it’s worthy of all the praise it’s been getting.