Or, if you’re the writer of this article, it could mean that he’s taken another step along a path that’s starting to look like a bit of a downward spiral.

Right after The Dark Knight came out, I was as much a Nolan fan as anybody. Even now, the streak of artistic/critical/financial successes stretching from that movie back to Memento remains a marvel.  When Insomnia is your worst movie you’re doing something very, very right.

There’s a reason, however, that the phrase “too good to be true” has taken on the status of cliche. Hot streaks go cold, and visionaries lose focus. With the (still-good and instantly meme-able) Inception, certain problems began to show up in his movies. Things felt a little more exposition-y, a little less precise and provocative. Ironically, that movie planted a seed of doubt in my mind; Nolan was heading off course.

The Dark Knight Rises fared significantly worse in the public square, because it’s a significantly worse movie. Not a terrible one, but a noticeable step down. I don’t know how many people outright dislike that movie, but it was polarizing in a way that Nolan films hadn’t been. It’s certainly a movie with considerable virtues. It’s also, to distill a long review down to three words, a huge mess. 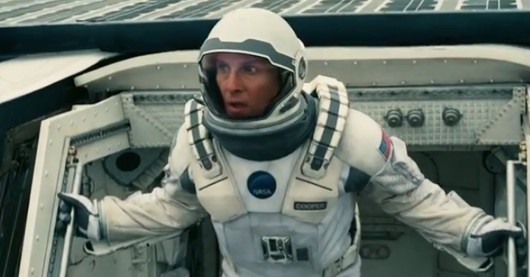 Interstellar sees Nolan’s germinating issues take full bloom. Which isn’t to say it’s a movie free of any merit at all. The sheer scope of the production is as impressive as ever, and delivered with the same sort of casual panache Nolan has displayed for almost a decade.* He’s got some serious help, especially in the music department — Zimmer took a break from writing monotonous superhero foghorns to turn in a score that’s genuinely cool.

Between those two, and some other key players, Interstellar finds a number of moments where the ideas and music and direction all manage to line up, and you can glimpse a pale reflection of the glorious movie Nolan was trying to make.

It’s just that his bad habits keep it from ever being anything more.

One such habit is thematic incoherence or mismanagement. The Dark Knight Rises suffered heavily from this issue — if you’ll recall, that’s the movie where the titular Dark Knight actually rises TWICE. The movie manages to nod at the Occupy Wall Street movement, nuclear weapons, long-held dishonesty, and basic revenge without ever really finding its voice on any of them. 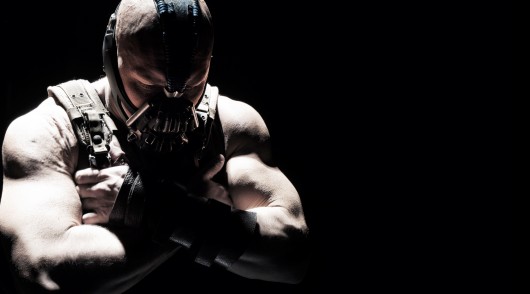 Interstellar is similarly afflicted. It has a number of interesting things on its mind, but rarely finds the time to explore them. I suspect some will find the brief mentions of this or that idea to imply a fuller treatment than I saw. Personally, I feel he’s never had a looser grip on the ideas behind the movie he was making.

In fact, when he’s on his game, his movies unfold almost like arguments. Go back to The Dark Knight and notice how each scene seems to respond, expand upon, or comment on the factors at play in the last one. The movie pits justice against anarchy in its opening reel and spends the remainder of its runtime sorting out the consequences.

None of the themes in Interstellar ring with that level of clarity. At various points, the movie appears to be flirting with a discussion of the nature of evil, what men will do to survive, the pioneer nature of the human race, and the tension between practical and exploratory science. Oh, and “what love is.” There are thematic hints, too, of things as grand as humanity passing its torch down between generations, to things as familiar as Murphy’s Law.** Interstellar is a collection of scenes from about seven really excellent sci-fi movies.

The other major problems with The Dark Knight Rises were muddled motivations and anemic justification for key story turns. Nolan had started down this path with Inception, which movie’s biggest problem is that we never really see Cobb and Mal’s relationship enough to understand what it was that he lost. Still, Inception has other attributes that mostly cover for this shortcoming. The Dark Knight Rises was where the confusion became a full-on issue.

Mainly, it was just hard to swallow that Batman — whose determination simply could not be broken in the previous movie — starts the movie as a retiree. It’s an intriguing story concept, and you can sorta justify it if you want to, but in the end it chafes with everything we’d been led to believe about the character up to that point.

A similar lack of attention accompanies the jarring romance between Bruce Wayne and Miranda. And then there’s also that amusing scene where the big reveal of Jim Gordon’s secret is Ban reading it off a sheet of paper, with Jim Gordon watching from a distant television.

Where The Dark Knight Rises was awkward and clunky, Interstellar is simply off from the beginning.

The first thirty minutes of Interstellar sees Nolan throwing out story points willy-nilly, barely letting a worldwide famine sink in before asking us to comprehend a little girl’s haunted bedroom. And then there are coordinates on her floor. And then NASA. Now our main character is the best pilot for a voyage he didn’t even know about two days ago. Other people constantly tell Cooper that he’s a born explorer, that he’s torn over his children, but these motivations are rarely made manifest in the actual action of the story.

Not to keep flogging this horse, but it’s an awful lot like the scene where Alfred finally tells Bruce about Rachel’s letter. I mean, there’s technically information in the movies that can justify scenes like that (i.e. we do mostly know what’s going on), but “technically” doesn’t cut it with those sorts of big reversals or payoffs.

There’s smaller stuff like this, too. I mean, I don’t even know what the deal was with grown-up Tom. 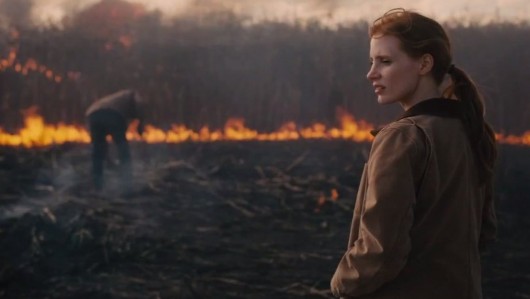 Relevant fact: Interstellar was Spielberg’s before Nolan took over. It’s an interesting bit of background knowledge, because the story seems tailor-made for the kind of stuff Spielberg is great at. The tension between the brain and the heart, the story of an absent father trying to cross through time to see his kids again… Spielberg just knows how to make those kinds of contradictory ideas sing.

Nolan, though, is a different filmmaker altogether. His best movies (The Prestige and The Dark Knight, in that order) are about the corruptible hearts of obsessed men. He’s by nature a bit cerebral and distant; the strongest emotional pulls in a Nolan movie tend to be the tragic moments. He specializes in breaking down the dark drives of obsessed men. I’ve read a piece or two that wondered if the new, more hopeful Nolan isn’t a bit of a contradiction in terms.

A friend of mine — quite accurately — noted that the sequence featuring an invisible Cooper tearfully screaming at his daughter from behind a bookcase, and ultimately guiding her to the salvation of humanity by communicating it through Morse Code via the second hand of her matching watch, is the EXACT kind of thing that Shyamalan would have been mocked for weeks over.

Except for in a Shyamalan movie, this scene would have been the entire point. 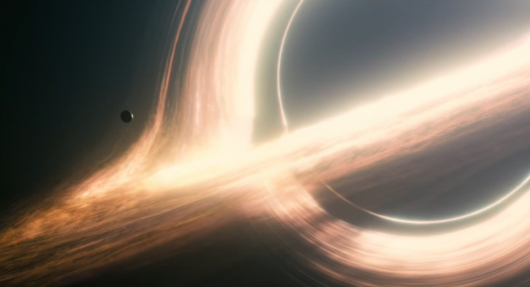 In the end, Interstellar just doesn’t add up. The movie is just lousy with cool ideas, but they don’t cohere and none of them are fully developed in that signature Nolan way. It’s a shame, honestly, because the filmmaker who was batting a thousand from 2000-2008 is a guy I’d really like to see make another movie.

I really wanted this to be the one. The movie that could bend time to bring back the Nolan who began taking the world by storm in 2005. With Interstellar, it seems like that filmmaker is trapped behind a gigantic movie screen, shouting at the top of his lungs. And I’m not sure I know what he’s saying anymore.

*And, admittedly, with the same spatial confusion that plagues other action scenes of his. I was extremely disoriented during the ocean escape sequence, and not in a good way.

**The repeated references to Murphy’s Law are a particularly orphan idea, unless the anything-goes nature of the film’s climax is meant to use the principle as its justification.

It doesn’t happen too often, but sometimes, one movie’s soundtrack ends up being great matched up with a different film. One of those times is now, where someone has taken the intro to Harry Potter… 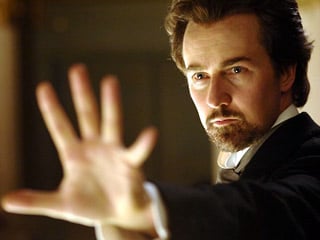 When thinking about Edward Norton I wanted to be clear in explaining who I think he is as a dominant figure in Hollywood.  But the folks at Filmreference put it best. Edward Norton is that… 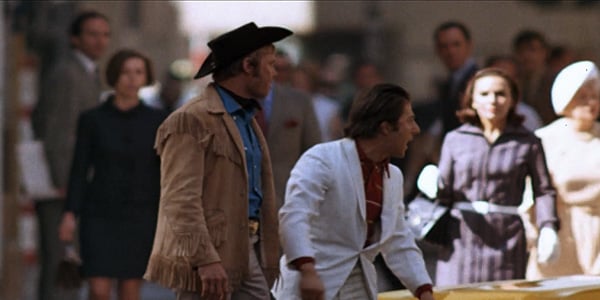 Most people who are reading the title of this article are wondering what is this famous “I’m walkin’ here” scene is all about. Based on the YouTube counters it’s been at least 4 years since…

Don’t want anyone to steal your phone or keep it if you lose it? Take this image, and make it your lock screen. You’ll probably get it back in the mail the next day with…

A few days ago we had this post, where Disney Princesses dressed up as their favorite female pop culture characters for Halloween. It was amazing, but it appears a few more have been added to…