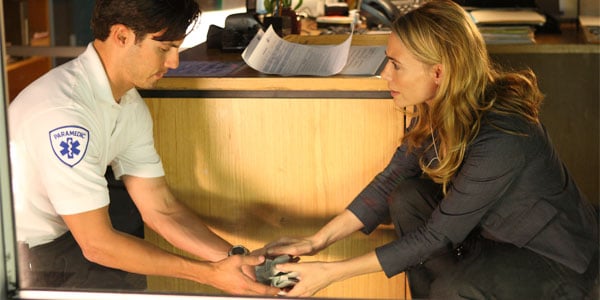 Another Monday, and I keep coming back to Heroes, holding onto hope that the show will finally turn it around.  In the latest episode, we learn a little bit more about the head of the carnies – Samuel – as he crosses paths with one of Heroes’ more established characters.  Claire continues to do Claire things while away at college, and Matt continues to suffer taunting and torment at the hands of Sylar.  I don’t think this week’s episode was as bad as last week’s two-hour premiere, but I still found myself, well, bored most of the time.  Full review after the jump, with spoilers, of course.* 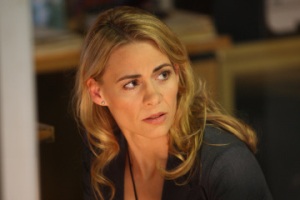 Samuel the carnie, still grieving over the loss of his brother, states to Lydia that he’s lost direction – perhaps a not-so-subtle allusion to the mysterious compass we saw last episode.  It seems as thought Samuel is currently in the business of recruiting people with abilities, most likely in an attempt to replace certain members of his carnival crew.  Last week, Samuel tried to recruit Hiro (he said he needed a time-traveler) and this week, Samuel has his sights set on Peter.  Donning a suit to blend in with the rest of the world, Samuel leaves the carnival and heads off to see Peter…but not before filing a negligence lawsuit against Peter, claiming that Peter hurt his shoulder when he rescued him from a wreck.

It turns out that Peter finds Samuel, though, after following up on the negligence lawsuit.  Peter is assisted by a deaf file clerk who is slowly starting to “see” sounds in the form of bright, beautiful colors.  It doesn’t look like she has any abilities outside of this, not that this is really much of an “ability” anyhow.  There’s no doubt she’ll be a love interest for Peter.  Let’s just hope he doesn’t leave her stranded in the future somewhere.  Anyhow, Peter confronts Samuel (after Samuel cleverly alters a newspaper photograph of the accident scene in question) and Samuel, knowing that Peter is an empath, spills out his sob story about losing his brother and having to provide for his family.  The recruitment is underway. 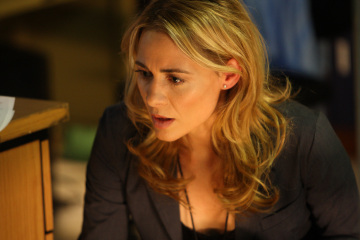 After his discussion with Samuel, Peter hears the deaf file clerk playing a stranger’s cello in the park.  A crowd has gathered around to hear the beautiful music, despite the fact that the file clerk can only “see” what she’s playing.  Quite frankly, this scene went on a bit too long and was pretty cheesy.  I’m not looking for reasons to dislike this show – I want to like it – but colorful cello playing?  What’s the point?  Maybe it establishes Peter’s interest in the deaf girl, but I had a hard time getting past the fact that it looked like she had never played the cello before.  Ah well.

Samuel goes to his old house, where his father served as a butler.  It’s clear his family is long gone and the current residents – in the middle of a fancy dinner party – turn Samuel away when he requests to come in.  Samuel takes this as  horrible offense and creates a sinkhole under the house, injuring (or killing?) almost everyone inside.  And sorry, I’m not with Samuel on this one – if a strange dude showed up at my house late at night and asked to look around while I was throwing a dinner party, I’d have turned him away, too.

Speaking of sinkholes, Samuel makes clear that his ability enables him to control the earth…but what about his ink manipulation?  He absorbed ink at the beginning of the episode, was able to change a newspaper photograph just by touching it, and last week, controlled a tattooed hand, using it to choke Ray Park.  So what gives?

Claire, meanwhile, thinks that constantly denying something will make it so that it never happened.  Gretchen saw Claire smashed and broken on the sidewalk, only to heal instantly, but Claire won’t admit anything.  Finally, however, Claire comes clean.  Claire told Noah she wanted to handle this herself, and I’m shocked that he allowed her to.  But more important is that Claire wants to put her trust in Gretchen and really, it’s only a matter of time before these two kiss.  By the way, I love that Noah has been working with the Haitian for years and he still refers to him as “the Haitian.”  Maybe we could humanize the guy with a name, huh? 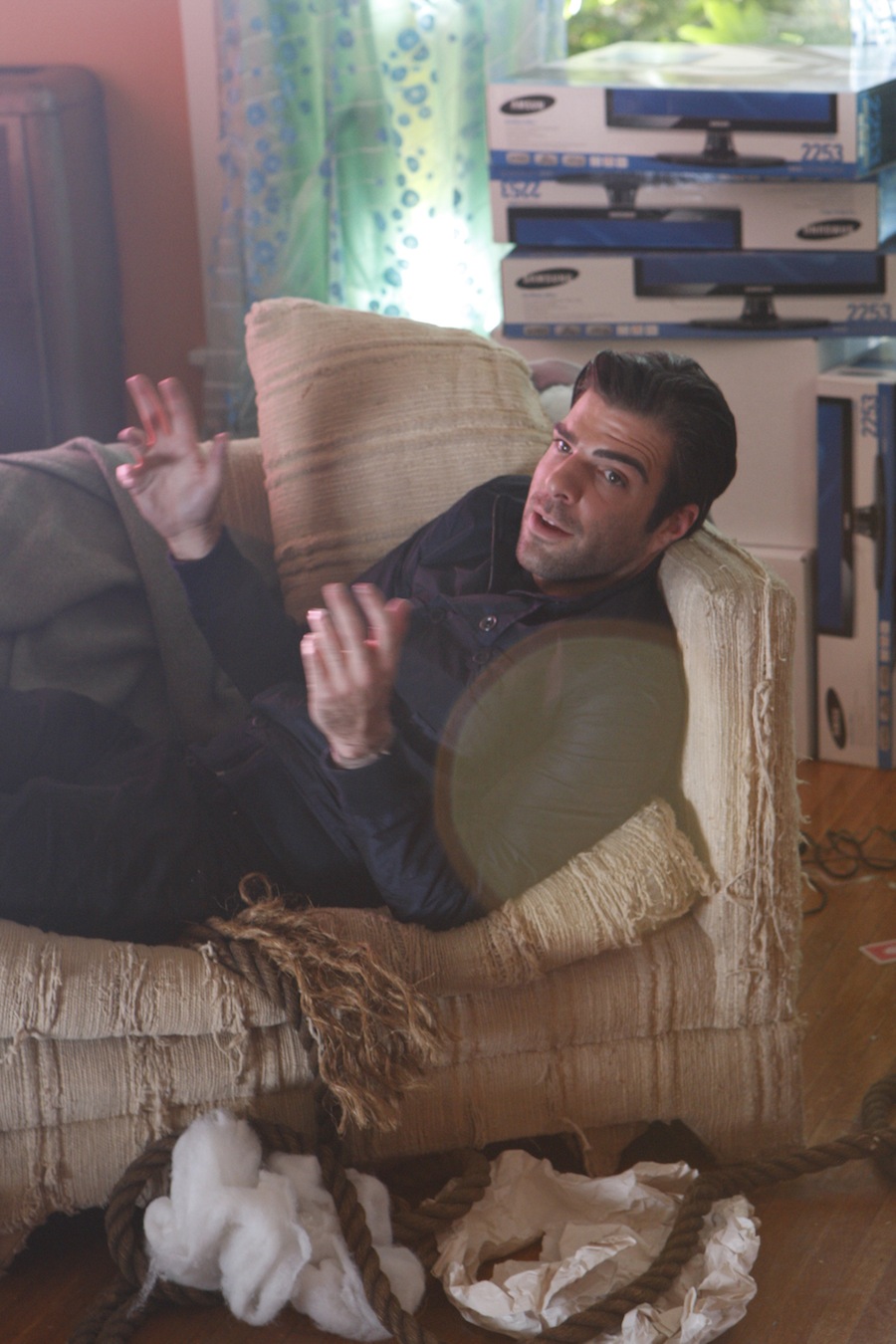 Thankfully, we got some good Sylar/Matt scenes this week, because if Peter’s not fighting, he’s boring, and Claire is pretty clearly the most annoying character on the show at this point, which is really saying something.  I have always liked Sylar, and I think that Quinto has a better screen presence than anyone else on the show.  It seems as though the writers have given him more room this season, and he’s taken full advantage of it.  He was sinister, encouraging, and smart-alecky in this most recent episode. 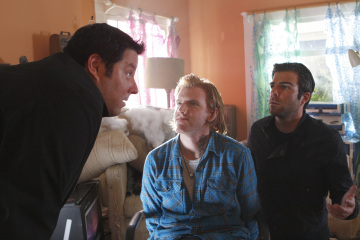 As a piece (probably a large one) of Sylar’s consciousness is rattling around Matt’s head, Sylar is able to torment Matt by using Matt’s own abilities against him.  He can show Matt images that aren’t there, for example, which is exactly what he does to trick Matt into thinking a lowly drug dealer has kidnapped and killed a little girl.  None of it’s true, and Matt ends up beating the crap out of a guy who didn’t really do much to begin with.  It was great seeing the stronger, more assertive Sylar manipulate the weaker Matt and I’m really hoping that this all ends up with Matt becoming evil.  He’s so unlikeable as a good guy, especially since he’s so lame about using his powers.  Please, let Matt go down the same path as his father.  Sylar claims to be messing with Matt so that he can get his body back from Nathan (only Matt can help Sylar), but you get the impression that Sylar really likes messing with him anyway.

And that was pretty much the “Ink” episode of Heroes.  There was nothing egregious going on, and I did enjoy the Sylar/Matt dynamic, but it was a slow episode and overall pretty boring.  What did you guys think?  And what’s up with Samuel and ink?  And the compass that appeared on Peter’s arm?