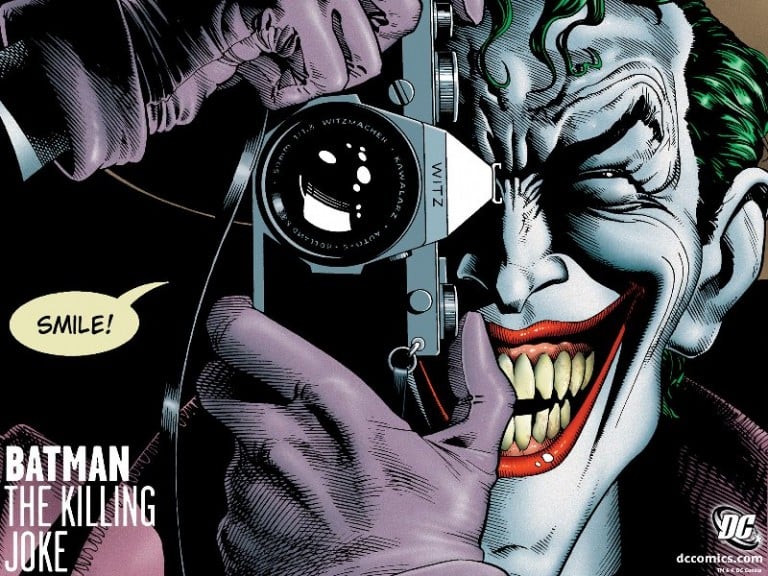 Welcome to my third tribute to look into the modern history of comicdom and bring you back some of the medium’s most memorable stories. Like I said before, some make it because they represent an important landmark, some are defining moments for classic characters, and some are just so flat out brilliant that they cast an endless shadow. This one is all of those things.

Batman: The Killing Joke has retained its status as one of the absolute defining stories of the Caped Crusader since it debuted in 1988.Unlike previous entries, it isn’t an entire arc, but a single issue, albeit an extended one. Still, it’s a single issue that has remained in print for over 25 years. Tim Burton calls it the first comic he ever loved and used it as the inspiration for his 1989 film that redefined how Batman and the Joker are portrayed outside of comic books for all time to a generation that grew up with Adam West battling Cesar Romero. Old school spoilers ahead.

In addition to presenting what has become the Joker’s definitive origin story as told by one of comicdom’s most storied and brilliant writers, Alan Moore, The Killing Joke is also a defining treatise on his “two sides of the same coin” relationship to Batman. But arguably the most far-reaching event in the story is the paralyzing of former Batgirl, Barbara Gordon. 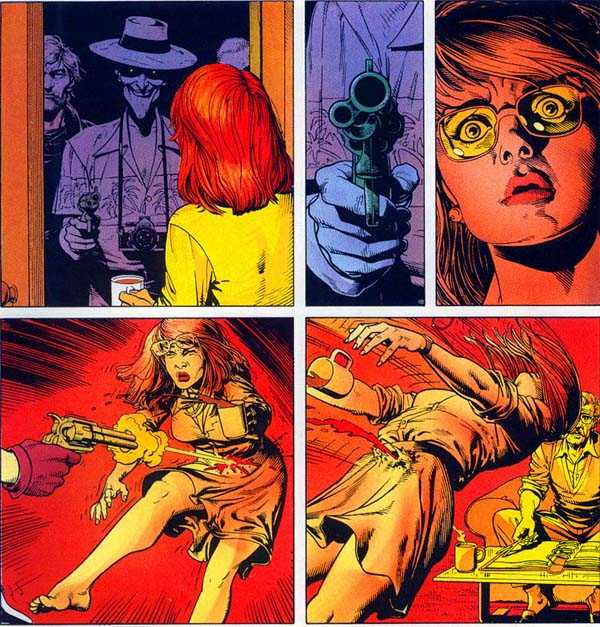 Yeah, Joker was not messing around. As part of his crazy nostalgia-fueled plan to drive police Commissioner Jim Gordon as insane as he is to prove a point that all it takes is “one bad day” to break somebody and turn a man into a monster he puts a bullet in Babs, strips her down, and has a little impromptu photo session which he later shares with her mourning father.

The ultimate irony of this act –which Joker is not even aware of, but would surely have appreciated- is that after all the dangers she faced at the Dark Knight’s side serving as Batgirl, she gets taken out in a random act of senseless violence perpetrated by a madman while she’s sitting quietly at home.

While this could arguably be seen as a “woman in refrigerator” situation, DC actually made this the best thing to ever happen to the character as the aftermath of this event leads to the wheelchair –bound Barbara eventually taking up the mantle of the superhacker Oracle where she became a much more effective and unique character than she would have been as just another character in a batsuit.

In spite of the brevity of the book, The Killing Joke features a wealth of character development between hero and villain and could be considered the definitive story of the two. Everything from the opening scene in Arkham Asylum to the final confrontation ending in Batman laughing for the first time (either while devolving into madness, killing the Joker, or simply in response to the grave irony, depending on your interpretation) every panel screams “classic storytelling”. 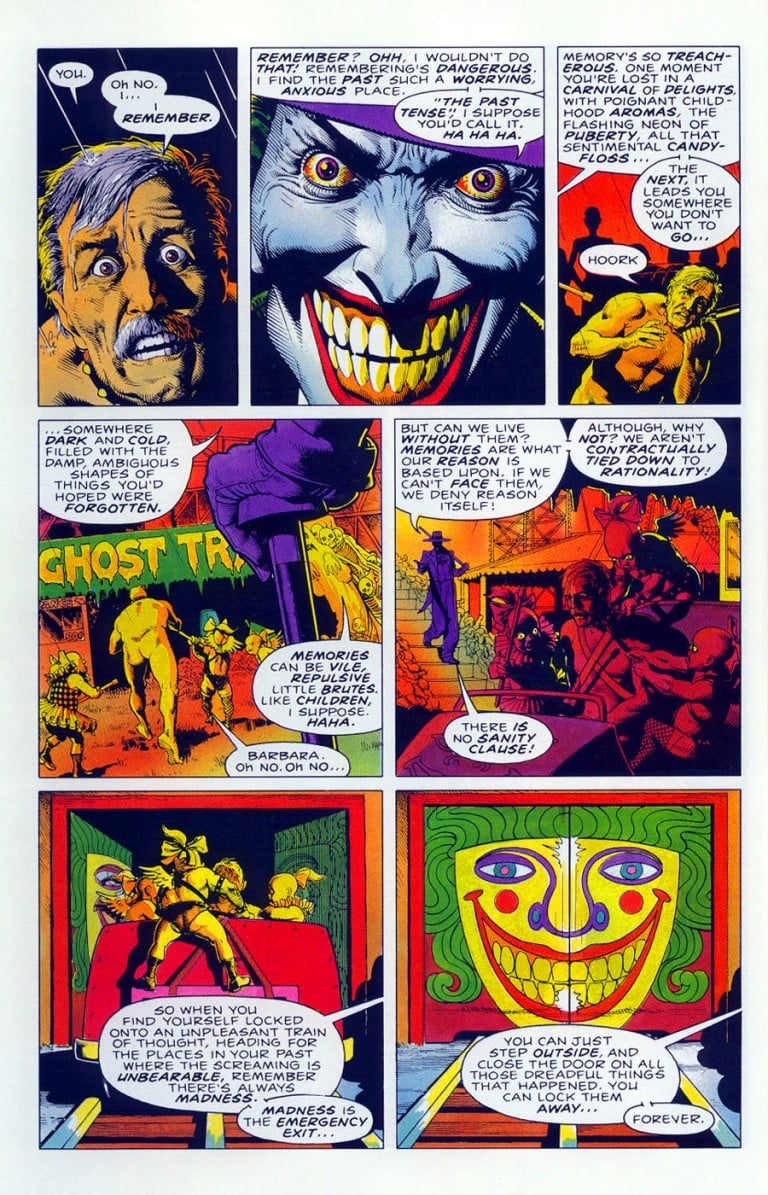 Brian Bollard’s art is some of the best ever featured in a Batman story and with Alan Moore’s genius brain directing it with precision, the result often has me flipping back and forth to marvel at the artistry of the transitions between Joker’s nostalgic origin story fantasies and the returns to real time as he attempts to justify his very existence. And I have to say that it’s a pretty special comic that can convincingly pull off an original musical number.

Among the insane visuals and numerous artistic flourishes associated with Joker’s tragic past and his insane homicidal present, there are a few moments of such genuineness from that you actually can see things his way, if just for a second. One panel of real emotion and confusion from him goes so far. Coupled with his amazing monologue about the random, disgusting, unjust, horrifying randomness of the world we live in and with insanity being the only way he could cope with living in an insane world, you can really feel sorry for the guy, even having just watched him gun down and violate one of the DC Universe’s most beloved figures. Moments like this are what keep people reading comics for their entire lives looking for another moment of such pure storytelling excellence.

Is The Killing Joke the greatest single issue of a comic book ever? Possibly. I haven’t exactly read them all, but if anybody has ever read a better and more definitive self-contained sequential art story in a mere 46 pages I’d love to hear about it. It’s essentially a short story that costs as much (or more) than a full graphic novel and is worth every penny. 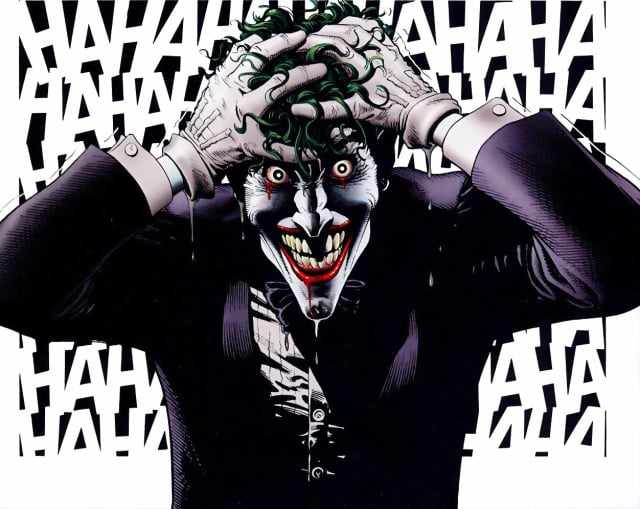 This image alone is worth it.

If you know much about Alan Moore, you may have noted that the man is often as looney as he is brilliant, showing once again that genius and madness are not separated by a solid line. Sometimes you get Watchmen or the League of Extraordinary Gentlemen repelling Martian tripods, and sometimes you get Lost Girls (look it up) and antichrist Harry Potter battling Mary Poppins. With The Killing Joke, Moore created one of the defining Batman stories and then decided it was garbage once everybody liked it. He’s just that big of a troll.

His claim that the story adds nothing to the mythos of the Dark Knight is true in the sense that these themes between Joker and Batman existed before, but there’s little doubt that Moore did an exceptional job crystallizing them. DaVinci said that simplicity is the ultimate sophistication and I’d say that distilling the essence of Joker’s psyche and dynamic with his nemesis as they had been built over decades into a single story is quite a worthwhile addition, even if it technically added nothing new.

Moore also publicly regretted crippling Barbara Gordon, claiming if he knew it was going to be perpetuated by other writers, he’d never have done it. This is even more baffling since as Oracle she became a much more unique, interesting, and inspiring character. Even if that was the only thing that happened in the whole book, it’d have been worthwhile. I’m chalking all this protesting up to artistic eccentricities.

Thankfully, we don’t need the author’s permission to enjoy his work and The Killing Joke is about as enjoyable as superhero comics get. There’s a long list of classic Batman stories and this one is near the top of just about any possible discussion of the best of the best. It’s brilliantly plotted, looks like a million bucks, brims over with artistry in both words and visuals, rocks the world of each major character within its pages, and changed the Batman mythos and the way people look at it forever. And people are still arguing about that last page over a quarter century later. Sorry, Moore. History has spoken.