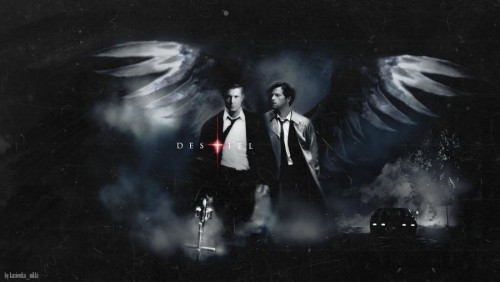 Some recent online happenings have got me thinking about the nature of fandoms and what happens when the desires of the people who watch a show or read a series of books threaten to overwhelm the vision of the creators. At what point, if any, should writers kowtow to the demands of the fans?

A couple weeks ago, the CW decided to try and engage fans of their shows on Twitter, which turned out to be a bit of fiasco; specifically regarding their long-running cult horror/fantasy/drama series Supernatural. The show enjoys a large base of female fans, which is odd for a show that has continually resisted keeping female characters around long-term, but by now we should have learned never to underestimate the charms of the Winchester brothers.

This particular ruffling of online feathers is worthy of note because it revolved around a popular slash fiction pairing of male characters. Shipping (the act of romantically pairing platonic characters) has become a bit of an extreme sport since the internet came into being. It’s been around for as long as nerd fandoms have, but in a poorly-lit little corner that most of us pretended to ignore. The internet age has done nothing so much as show us that as screwed up and perverted as we are, everyone else is just as bad if not worse.

This social realization and the resulting support group mentality has emboldened fandoms and led to an impressive renaissance of fan-made stories and art as formerly isolated individuals now have digital spaces to meet, organize, share, and perhaps plot to overthrow the creators. Be afraid, cult writers and showrunners. Be very afraid.

You came to the wrong neighborhood, mother***er.

I’ve personally been raving for a decade that Supernatural has been the most consistently entertaining show on the air in that time. While I still stand by that statement in the big picture sense, it’s no secret that the show has lost some of its steam and has been stagnating over the last few seasons with repetitive storylines.

Repetition leads to boredom, boredom leads to sagging ratings, sagging ratings lead to fear, fear leads to anger, anger leads to hate, hate leads to suffering… Path to the Dark Side, fellow nerds; you know this. But how to improve a show that has already done everything, gone everywhere, and is still going?

Supernatural began as a simple horror genre homage that eventually incorporated aspects of fantasy, alternate realities, metafiction, and religious mythology to expand its story possibilities, and has often reached out to engage its fanbase in some episodes, commenting on rumors of cast feuds, and poking fun at their images. Hell, they even jokingly referenced the popular “Wincest” pairing of brothers Sam and Dean in an episode in a rare instance of fictional characters getting a chance to react to the fanfiction they inspire.

That is to say that the show has explored a lot of possibilities in its continuing adventures. And perhaps that teasing is part of what’s made it a target recently. Sam/Dean pairing are old hat now. Now it’s all about Dean/Castiel (“Destiel”). Fans have claimed that the pair have been written in romantic tropes for years and should (for lack of a better way to put it) just f*** already.

A couple years ago, a group of fans decided that the angelic Castiel was the reason the show has ceased to progress and become mired in gritty religious themes, they demanded that the actor who portrays the character be fired. Naturally, both the show’s creators and fans of the actor/character flocked to Misha Collins’ defense, and rightly so. I mean, who calls for this guy to be fired? 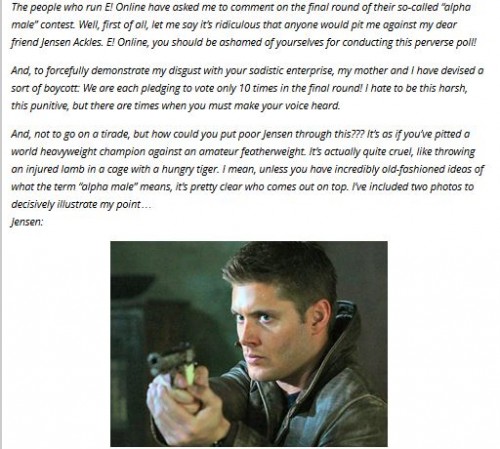 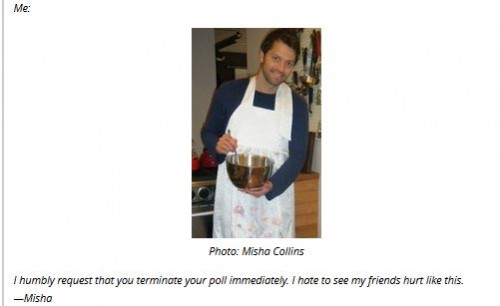 While that was a rather isolated incident of fans attempting to take over the show’s narrative and cast decisions through sheer rage, this latest attempt during the #AskSupernatural Twitter session was something else entirely and raised some very interesting questions.

Now, with Supernatural being an extraordinarily manly show about manly men manily maning and the fanbase consisting largely of non-men, there were going to be problems at some point. This Destiel thing has been picking up steam for a good five years or so since Collins became a regular cast member. It’s so ubiquitous to the fandom now, that Con panels have begun banning shipping questions, apparently because Jensen Ackles (who plays Dean) finds them awkward. Collins, on the other hand, handles them like the boss he is. Consider the alpha male question settled.

The show has since been accused of “queer-baiting”; hinting at homosexual pairings they never intend to follow through on via subtext in order to gain the target audience and then leave them hanging. These kinds of feelings inevitably bring up the core question here: whether or not showrunners owe it to their audiences to give them what they want to see.

Everybody has heard the old business saying “the customer is always right”. The writers, directors, producers, actors, etc. may create the show, but it’s the fans who make the show. A cult series especially depends on its hardcore fanbase to wave their flags and circle the wagons in their name. But does that mean they should allow them to make story decisions by committee and pair characters off romantically? 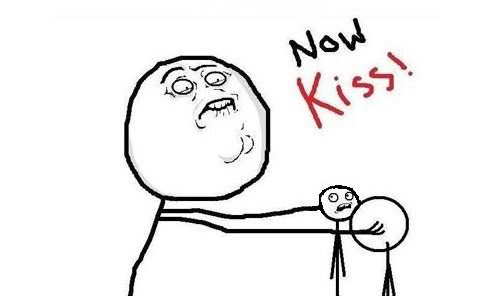 This show in particular has played around with alternate universes in the past and it wouldn’t be too much of a stretch for the characters to find themselves in one where their alternate selves fell for each other so it is very possible for Supernatural to concede a little something to the fans without making the “Earth 1” Dean and Castiel gay together forever. There are spells, potions, tricksters, etc. that could make for a one-off episode; just saying it could happen. True Blood had two straight male characters dream at length about getting it on just for the hell of it. Will. Way. Just saying.

But given Ackle’s apparent squeamishness with the topic, it seems possible that a bit of homophobia on the actor’s part may be the reason fans won’t get serviced here, which is a whole other can of worms, specifically whether an actor should be coerced into doing something sexual onscreen that they aren’t comfortable with.

Emilia Clarke has reportedly refused to participate in any more explicit nude scenes in Game of Thrones, which is an issue since sex and nudity is part of the show’s aesthetic appeal and the story will call for them from her character. Of course, replacing Clarke would be unthinkable, so I do believe that the show should honor her request and try and work around it. Actors are people too and I don’t believe they should be harassed into sexualizing themselves onscreen in ways they don’t want, even if it seems childish, like in Ackles’ case. Destiel fans may be out of luck.

Let’s consider the possible precedent if the hardcore fans get their way. Say that the show makes Destiel canon and other fandoms erupt into a volcano of demands and boycotts, causing writers and directors to cast aside their own visions in favor of giving the loudest fans what they want and avoiding the unwanted fan schisms and accusations of homophobia. Does the world really want Spock and Kirk (Spirk?) to hook up in the next film? What about shows like Legend of Korra where every positive onscreen interaction between characters leads to immediate shipping?

Not the actual dialogue, but I kind of wish it were.

This leads us to the touchy question of introducing homosexual relationships into childrens’ shows. I don’t personally consider this an issue, but it’s no joke that this is ground where most fear to tread. Sure, live action adult dramas use girl-girl kisses and whatever to drive up ratings every now and then, but the same people who tune in for that could go into “won’t somebody think of the children” mode in a second when cartoons are involved without even realizing the inherent prejudicial flaws in their logic. But logic doesn’t drive ratings or derail toxic controversies, does it?

While it’s always a good thing for a show to engage fans and strive to please them, caving to story demands just seems like a bad idea to me. Artists are artists and fans are fans for a reason. One excels at creating, while the other connects with the creation. When the latter asserts control over the former, the odds of the art retaining the essence of what connected with the fans in the first place are probably not good.

For me, fiction needs that element of surprise to achieve its maximum potency. An occasional “will they or won’t they” flirtation between characters adds tension, but having it always mean they will would remove the tension and make a trope into a full-blown cliché. Oh look, they made eye contact. Two episodes tops until make out ensues. Flutterdash for the win. Yay, I guess. [yawn].

Back to Supernatural, the problems that aren’t necessarily being directly addressed but are hinted at by the occasionally Misery-ish fan attacks concentrating on their ship of choice suggest that the show does need to change it up. It has featured a lot of great female characters, but they pretty much always end up either dead or just gone after a while. Ditto gay characters. And if you’re both, they may literally send you off to Oz. No joke. In the past, this could have been easily written off because it’s a story about transient brothers who never put down roots. But with Cas in the mix for half the series’ length now it’s clear that they are willing to make room for more…so long as it’s another bro. 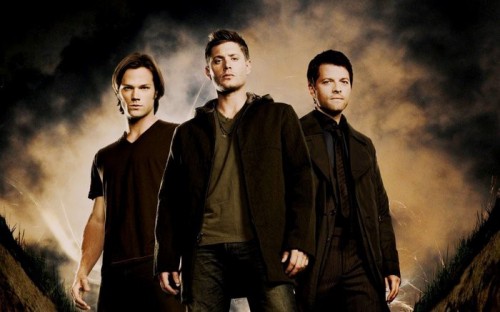 It’s probably not too much to ask for the writers to make a conscious decision to acknowledge their female/LGBT fanbase by keeping on some recurring characters that represent their interests. That’s not caving to crazy fan demands, that’s just properly servicing your customers. I don’t see a downside. Supernatural needs to get out of its rut and a new supporting cast would be a great start.

Alright, now that I’ve solved all of the Supernatural universe’s problems I feel like I’ve earned the right to tell them what to do. Sam and Ghost Bobby. Together. Make it happen. Okay, no really; season six had an episode in which our heroes cross over into H.P. Lovecraft’s Cthulhu mythos. Fans of that particular author may note that there is more than enough material to fill an entire season and then some. It’d be a return to classic form.

I for one, have been dying to see the Winchesters go head-to-head with Lovecraft’s stable of otherworldly abominations at length ever since that episode gave us a taste. If the show’s current plan is more angry fallen angels plotting away and killing each other while Sam, Dean, and Castiel take turns having various psychological crises/moral quandaries and Crowley flits in and out of the narrative at will to create mischief then it’s safe to say that the writers don’t have any better ideas. Don’t make me get a Twitter account and come over there, guys! 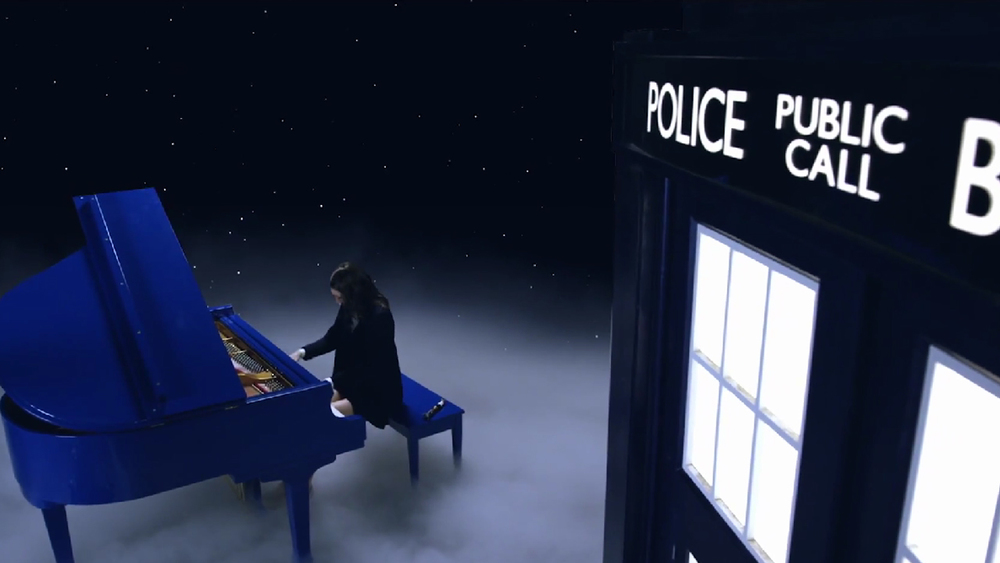 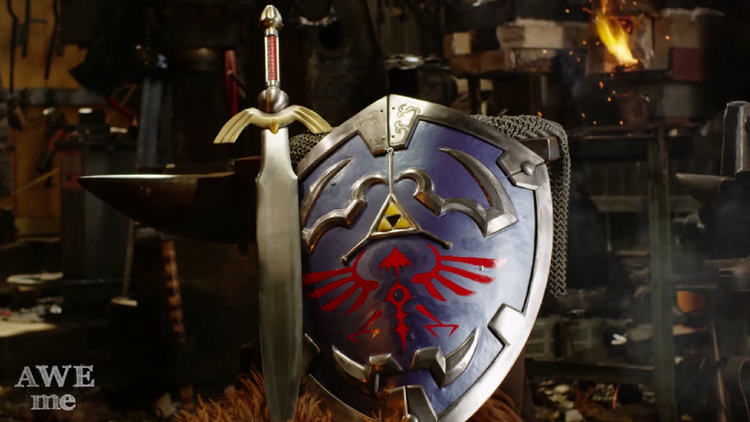 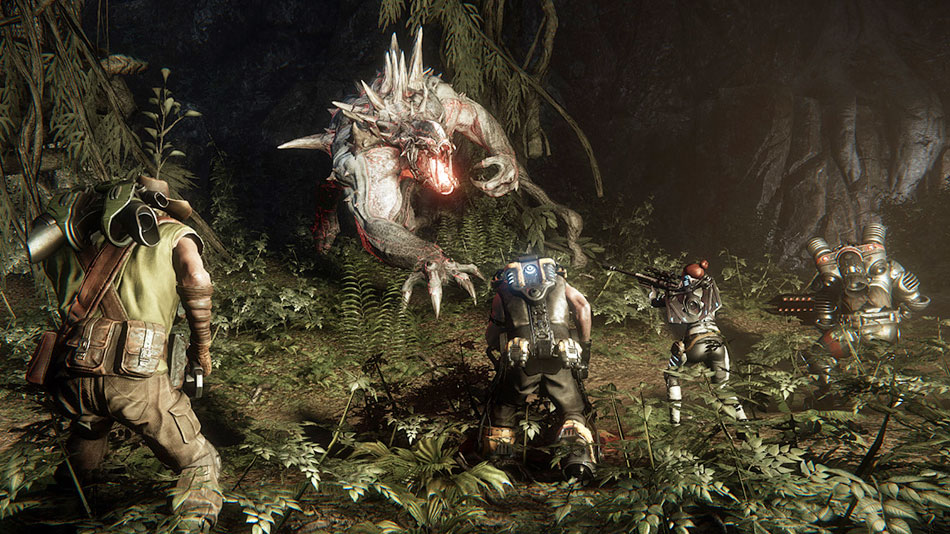