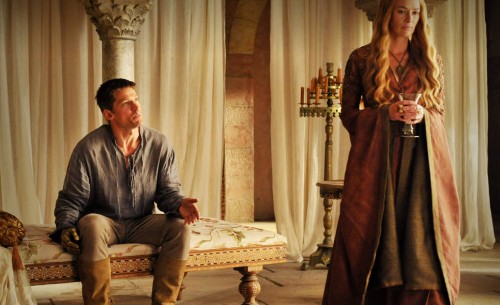 Game of Thrones is back for season four, finishing off the second half (and maybe more) of George RR Martin’s third book. Fortunately, there’s so much action packed into Storm of Swords, it can easily create two incredibly impactful seasons, and I think most people are still reeling from last year’s Red Wedding. A TV massacre truly without equal.

Season four didn’t exactly start out with anything like an upheaval. Rather, it was more about setting the stage for what’s to come, and as such we got to touch base with I think nearly every major group of the show, a rarity for the program, and also meet a few of the new characters as well.

King’s Landing is buzzing with preparations for Joffrey’s wedding to Maegary Tyrell, who had the best line of the night referencing Joffrey’s necklace of “dead sparrow heads.” Joffrey didn’t do anything too terrible other than make fun of uncle-father Jaime, who is finding readjusting to life post-capture rather hard. 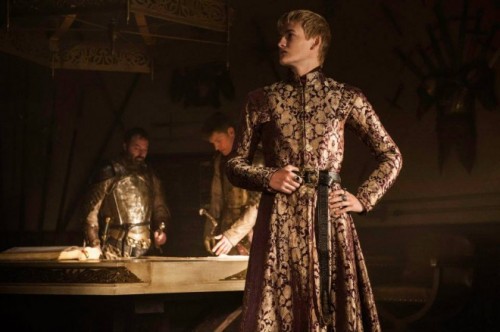 Jaime is perhaps the most interesting character going forward for the show. Cersei has rejected his affections, though I’m not precisely sure why. Yes, he was gone a while and lost his hand, but what has turned her away from him to such a degree? Jaime’s father wants him to essentially retire while Brienne is badgering him about “protecting” Sansa, though he has no idea what he’s really supposed to do about that.

In short, Jaime lost nearly everything about himself when he lost his hand, and it’s going to take some time to find himself again. I love Jaime because of the transformation he’s undergone, not just physically, but mentally and emotionally, and that’s only going to continue over time.

Cracks are beginning to form between Shae and Tyrion who rejects sexy fun time because he’s too stressed about his borderline suicidal wife. Sansa has found a new friend in the form of the drunk Ser Dontos, who the “previously on” scenes were careful to reference so we remembered who he was. She’s rather despondent as per usual, and the Red Wedding has affected her more than anyone else. She’s practically a ghost, wandering the halls of King’s Landing, forever grieving as her family members keep getting massacred. I don’t think she knows if any of her family is still alive at all, other than possibly Jon Snow, if she even counts him.

We did go up to the wall briefly where we see that Jon Snow is getting hounded by the new ruling party of the Night’s Watch, ie. that one guy that hates him and that shitty guy who Tyrion fired from security duties at King’s Landing. Snow warns of a massive Wildling attack, and Maester Aemon forces the others to forgive him for his sexy crime of bedding a Wildling girl. And you know, betrayal and all that other stuff. Surprisingly, we saw Ygrette and Tormund even without Snow, as they now have to deal with the menacing Magnar of Thenn, aka the terrifying Albino from Banshee. The Thenns are cannibals, so that’s fun. 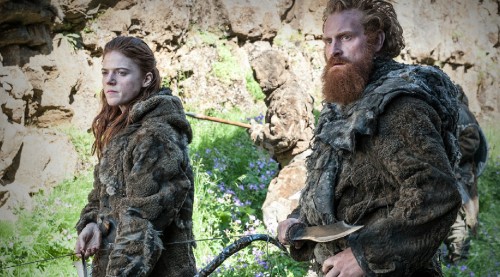 Across like six million oceans and continents is Dany, plotting her next slave-city conquest as her dragons get scary big. The black one, Drogon, is becoming a giant compared to the others, and she’s losing control of them. Will she maintain enough influence to actually be able to ride them at some point? Also, we got our first look at the new Daario, which frankly, is a welcome change. The other actor felt weirdly out of place on the show, and I like the new one quite a bit more. He’s got personality while the other was just a pretty face. Dany accepts his flowers, and who knows what else from him in the future. God, she’s so freaking tiny. I only just noticed that when she was walking through her army. Girl needs some heels. Or you know, a dragon to ride.

The most major new cast addition would be Oberyn Martell of Dorne, whom we meet in a rather dramatic fashion as he rolls through a whorehouse stripping women and stabbing Lannisters. We learn that his whole family has a grudge against the Lannisters as they murdered the children borne by his sister to Rhaegar Targaryen as they swept out the dragon-clan from King’s Landing. With Joffrey’s wedding coming up, all eyes turn to him to see if he’s going to try anything. Soon we’ll get to meet the recast Mountain too, I imagine.

Finally, we get to see Arya get some measure of revenge against the men who killed her friend and captured her long ago. That was an exceptionally badass bar brawl, and Arya was downright cold-blooded once she got in on the action. For some reason, that Needle to the throat kill was one of the most brutal I’ve ever seen on the show, just for how long it was dragged out. Though the Hound impaling that dude’s face on his own knife was pretty rough as well. Arya’s slow transformation into badass killer begins, it seems, which is all we’ve ever wanted for her.

I didn’t watch upcoming scenes so I don’t know if the wedding is next week, but I’m going to guess it’s episode three, just for the amount of set-up it needs. And it will be worth waiting for, I imagine.

– I was surprised to see them bring Dontos back, and he gives Sansa a necklace rather than a hair net (which is a little less odd). I half expected them to just do away with Dontos and have Petyr Baelish make his intentions somewhat more clear, but it seems they want to keep his involvement a secret like it was in the books. We didn’t see him at all last night.

– I think the show is already setting up Shae’s betrayal of Tyrion better than the book did. I didn’t quite understand why she turned against him, but here, the cracks between them are a lot more obvious. He’s distant, she’s jealous, it will make sense when it happens. Though I don’t remember them being found out by that servant girl, who tells Cersei what’s going on. How will that play into things? Is that how Tywin finds out about her?

– How long will it take for Jaime to get his sword mojo back? Two and a half books later, and he’s just barely starting to be able to wield a sword again. Will he really be out of combat commission for that long, or will they allow him to recover more quickly?

– I’m glad the book isn’t ignoring details like Dontos or the City Watch guy becoming a Crow. It would be easy to simply forget stuff like that, but detail is important. 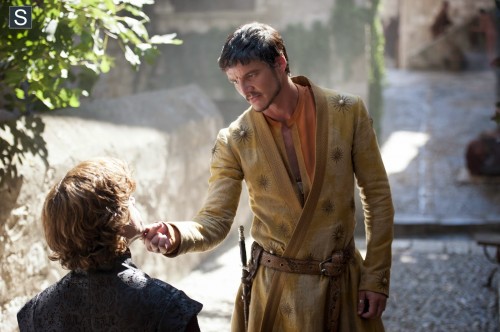 – I don’t think Dorne has really been set up too well to this point. I have to imagine show-only-watchers don’t have any idea where Dorne is and who the Martells are. Though to be fair, when we do go to Dorne later in the books, it’s one of the worst sub-plots, right alongside the Iron Islands. Speaking of, where is Reek and the Bastard of Bolton?

– I expect to see relatively little of Bran this season. We’ll meet Coldhands, but Bran’s story is just not that interesting, and I don’t think we’ll see him more than a handful of times.

– I wonder how Ygrette’s death will be handled. It seemed like something of an anti-climax in the book, though now the show is actually giving the Wildling her own segments. Perhaps it’s so the audience gets more attached to her.

– Who gets the other sword? I can’t recall.

– What were Cersei’s “symptoms” that Qyburn was referencing? I honestly can’t remember what that’s about.

– Last season I had JUST read all the books so everything was fresh, but now my knowledge will be a bit more hazy as I’m further away. Apologies if I say anything stupid as a result, and feel free to correct me. Please tag comments with “BOOK SPOILERS” if they apply.