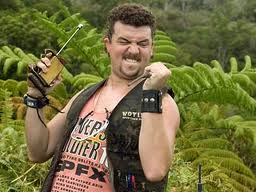 As I’ve written before, and as far as I’m concerned, Danny McBride is batting 1.000 in his comedy career.  He’s been funny in literally everything I’ve seen him.  And while I haven’t seen Land of the Lost from start to finish (why would I?), the scenes featuring Danny I saw on cable were actually pretty funny, too.  I think the first time I saw Danny was in Hot Rod, easily one of my favorite recent comedies, thanks in large part to his character Rico.  Eastbound and Down starts up again this coming Sunday, and personally, I can’t wait.  Whereas many comedic actors eventually tire me, I’m yet to get sick of Danny McBride.  Hopefully, you’re like me and can enjoy the 10 hilarious Danny McBride video clips I posted below.

Rico totally gets a new hat and wears it for his dance party in Hot Rod:

A great scene from The Foot Fist Way:

Homeless and sexy in Drillbit Taylor:

A great deleted scene from All the Real Girls:

The gang scene from Observe and Report (click through to watch):

We’ve seen nerdy engagement and wedding shoots before, but this takes things to entirely new heights, pun completely intended. This pair of grandparents decided to celebrate their 61st wedding anniversary with an Up themed photoshoot….

So we feature a lot of art from the fantastic site DeviantArt here, but I noticed that we were featuring one artist more than any other. His name is Genzoman, and all I know about…

httpv://www.youtube.com/watch?v=ClwIj3x24Q4 By Victor “Fiefo!” de la Cruz Not all words of wisdom have to come from history. Our favorite entertainment mediums, such as movies, television shows, cartoons and even video games are filled with nuggets…

An Unreality guest post by Thomas Fink. Why I picked it: I just read the first two Hunger Games books and was hooked, despite them being a young adult-type series. I believe, like Thomas, that…