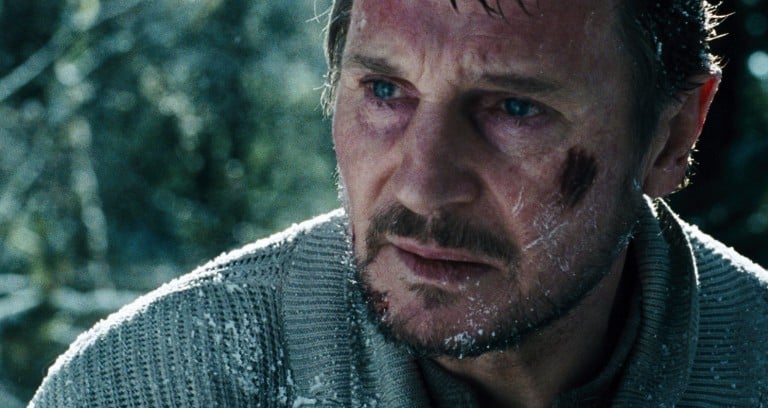 I assume you guys don’t need the news recapped on this site. For our purposes, let’s just say that (aside from being all-around awful) recent events have given our talking heads yet another opportunity to prove themselves more or less incompetent when it comes to discussion of the various faiths that impact the lives of, literally, billions of people. I won’t bother pointing out which heads I’m talking about; I imagine that we can agree in a general sense that incompetence is rampant in discussions of the subject.

Fortunately, when our trained information gatekeepers let us down, there’s likely a movie about talking monkeys or a man punching down wolves to provide some actual food for thought on the contentious intersection between mankind and the divine.

Truthfully, The Grey belongs in about fifty theoretical lists, but one such piece would have to be “most misleading ad campaigns.” The trailers, not to beat around the bush, sold this as the movie where Liam Neeson straps up with broken glass and starts punching wolves. This event does technically happen in the movie, but it’s almost literally the very last shot of the thing.

Until then, The Grey isn’t quite the “Ra’s al Ghul boxing dogs” extravaganza that a lot of us were hoping for. What it actually IS, oddly enough, is a movie with quite a bit of philosophy on its mind. Don’t get me wrong: It still plays as a gritty survival thriller — but there’s quite a few metaphysical musings sprinkled in amongst the death and action.

Mainly, the movie zeroes in on and revolves around Neeson’s Ottway, and his existential struggle with the cold, unforgiving universe he finds himself stranded in. At times, The Grey almost seems of a piece with the work of a filmmaker like Ingmar Bergman, whose work regularly delves into the absence of God. Except The Grey does it with a significant uptick in the frequency of wolf punching.

Like Bergman’s work, the movie isn’t thoughtless in its nihilistic querying. Like the other movies on here, The Grey leaves room for multiple worldviews to coexist within… even though like most of us, Liam Neeson’s character never quite gets the answers he looking for. 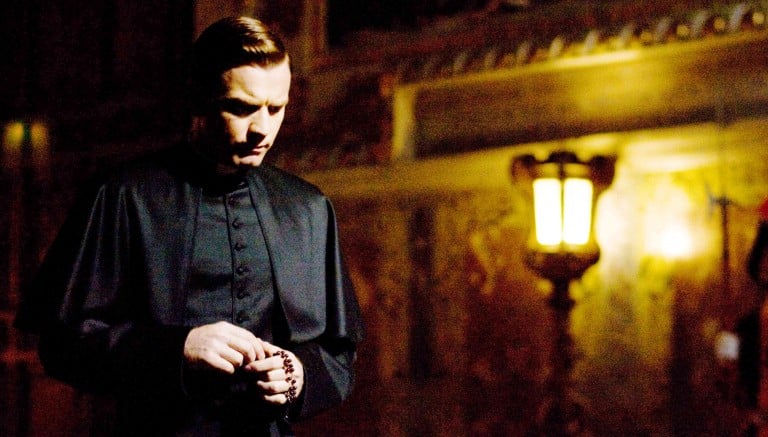 No, I’m not a fan of Dan Brown. Yes, this is the perfect opportunity to point out this list.  Angels & Demons, while still probably his “best” work, is a story shot through with historical and literary errors of every kind, with most of the historical ones distorting the history of the Catholic Church beyond all recognition. The movie, though, is just so much fun. It practically hums along, aided by a killer score and maybe the most ticking clock devices of all time. The inherent stupidity of the plot eventually ceases to matter. Plus, you don’t have to read it.

Another nice feature of the movie is that some genuinely nice moments pop up amongst all the craziness. At the end of the day, there actually seems to be an idea in here that a mutual respect can grow from the historical (though by no means ubiquitous) tension between science and religion. Moments like Langdon’s admission that he feels faith is something he’s simply not meant to have, or the Cardinal Strauss’s reminder that religion is flawed, because man is flawed. These ideas are sort of simple and probably outright cliches, but the movie seems to be sincere about it.

You know, it’s a sad day when I look at an adaptation of a Dan Brown novel and think, “hey, that’s more nuanced than it had to be.” 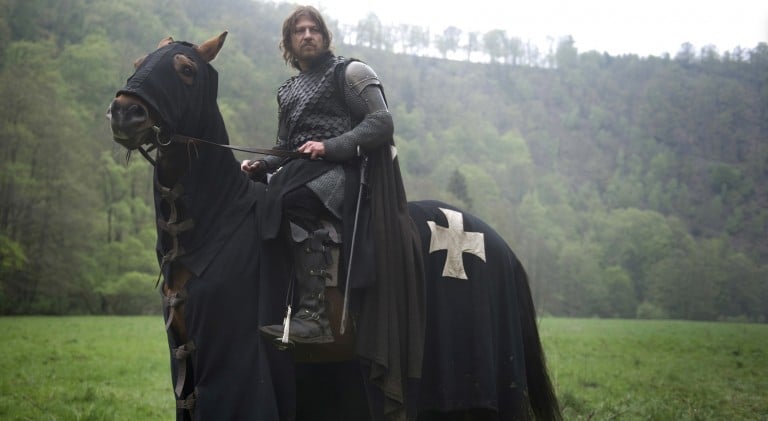 More people need to watch this movie. Though some of my friends found it too melodramatic and over-the-top to take seriously, I maintain that it’s one of the better medieval thrillers I can remember seeing. Its plot follows a band of knights (and one young monk) as they head into the woods to find a village that — to believe the stories — has managed to completely avoid the Black Plague. Also, if you believe the stories, they’ve done it through witchcraft. You can imagine how that turns out. Hint: The movie’s title.

Unlike Angels & Demons, Black Death takes a view of the medieval church that has some historical legitimacy. History shows too many instances of religious authorities mishandling their power. These are still complex issues, to be sure, but it’s impossible to ignore the role the church played in them. Black Death tells its story on a small, fictional scale, but the fear and authoritarianism are likely accurate. When the knights reach their destination, however, tables are turned. They quickly learn the villagers have a predilection for violence that handily matches anything we’ve seen from the men of civilization.

On one level, the movie’s descent into madness feels like a darkly satisfying, Gone Girl-esque case of “getting exactly what you deserve.” On another, it’s disturbing as hell. Black Death nods to the simple truth that cruelty and barbarism often form a two-way street; and certainly aren’t unique to the people on the other side from our own. It finds the evil lurking in the hearts of men and makes it a far more terrifying threat than any transient disease. And those evils are inextricably linked with human nature at every point in its history (including, sadly, the early months of 2015).

Planet of the Apes 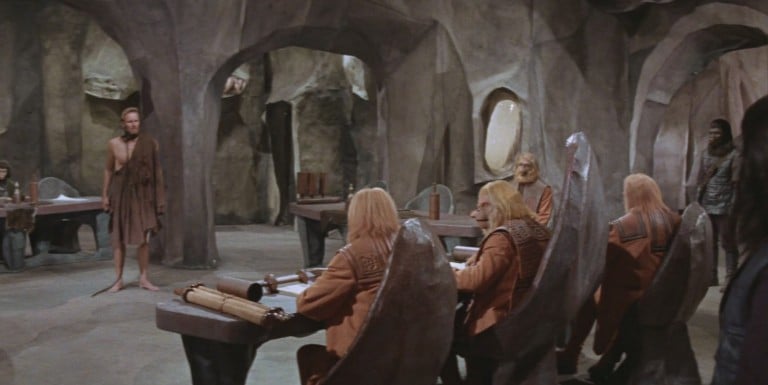 Though it’s mostly known for the most casually-spoiled twist ending in movie history, Planet of the Apes remains in our cultural lexicon becauses it’s genuinely one of the smarter sci-fi movies of its time. Before we get to the iconic final frame, we bear witness to what is essentially a legal drama about a man standing trial in a courtroom divided along the now-familiar lines of evolution and religious dogma.

Yeah… basically, for about twenty minutes, the movie sort of turns into a Bizarro-World version of Inherit the Wind, one with way more monkeys and a mostly-naked Charlton Heston standing at the center of things. Both of these, it must be said, would likely have improved Inherit the Wind quite a bit.

Naturally, the pious government officials bear the brunt of the movie’s criticism; however, while the anti-fundamentalist strain of the movie dominates its dialogue, there’s more going on underneath the hood than a simple execution-by-caricature. Dr. Zaius’s motives, for one thing, turn out to be quite a bit more complex than blind faith. But more than that, Planet of the Apes ultimately winds up as a story where every single character is dead wrong about their most deeply-held belief.

Zaius and his followers are wrong or liars. Cornelius was wrong, too, both about the actual origins of apes and about Taylor serving as a missing link. Perhaps most tragically, the very ending of the movie exposes Taylor’s story for the almost willful delusion that it always was. “Damn you all to hell,” indeed. As Taylor warns Lucius near the end of the movie, “Don’t listen to anybody over thirty.” Because, as we continue to prove into the second decade of the 21st Century… you can be close-minded over just about anything.

(Also, folks, a hopefully unnecessary note… let’s be cool down there. Too many tempers flarin’ these days.)

I just finished watching The Hunger Games: Mockingjay Part 1 last night, which I found perfectly okay, yet agreed with what everyone else was saying that it was mostly filler, leading up to the Capitol-invading…

Unreality reader cosplay week has been a rousing success, and we’ve seen some really damn cool costumes over the last few days. It’s Friday, so I thought I’d temporarily conclude the series with a rather…

I’d like to talk about irony for a few minutes. Last week I expressed my distaste for (most) Nicolas Cage movies to a friend who held the exact opposite opinion. “I love Cage movies, man,”…

Yes, my timing here is very much on purpose. This Paul Walker tragedy happened, and swept over the masses like wildfire. Within a day, I had given my thoughts on the situation. Some agreed and some…