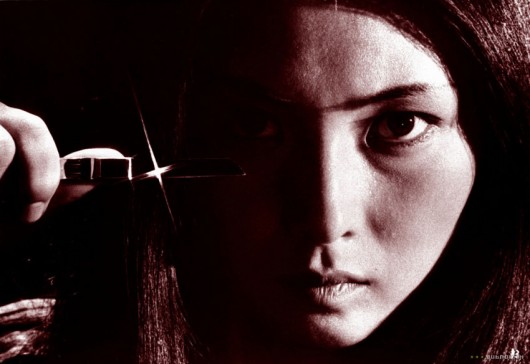 Usually when you think of ownage in a film, you picture Arnold blowing someone’s face off or Clint Eastwood telling some punk to make his day; something crass and violent, yet totally cool and very ‘Murican. But sometimes, the most badass possible thing you can do to show your enemies that you just don’t give a damn is done without even personally harming a hair on their head.

Here are some movie moments where a character drops the big “eff you” on their antagonists; irreversibly devastating them psychologically or just flat out mocking everything they think they know by showing them that they cannot ever control them. You won’t find any one-liners followed by violence here; just pure, unadulterated pwnage that transcends traditional concepts of vengeance and defiance as they’re usually presented to us onscreen.

To put the awesomeness of these moments into context, spoilers are required, so tread carefully if you have any desire to see any these films, but haven’t yet. 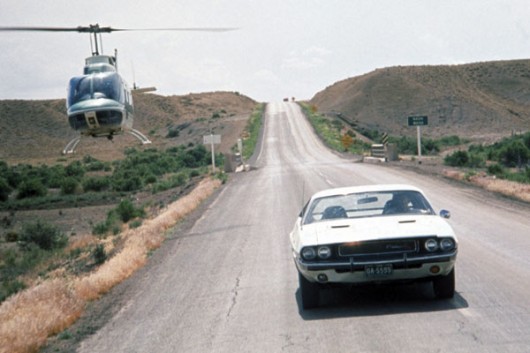 Vanishing Point is a perfect example of the kind of film they just don’t make anymore; a delightfully unfiltered mix of 70’s exploitation and leftover 60’s social defiance with just enough artfulness to make it a cinema classic. The story of a broken man who takes a bet that he can deliver a package from Denver to San Francisco in one weekend is both depressing and inspiring at the same time. And its abrupt ending is possibly the biggest symbolic anti-authoritarian “f*** you” in cinema history. I don’t think we’ll ever see its like.

A man known as Kowalski is our hero here, and he’s racing the backroads across half the country in his Dodge Challenger. It’s not long before some cops gets on his tail, but he can’t stop. Won’t stop. All he’s doing is driving on an all-but abandoned road. Screw those guys. As Kowalksi races on, the chase/search gets bigger and more intensive. As he pops speed pills to stay alert and meets different people in his journey, his depressing backstory as a Vietnam veteran and ex-police officer with nothing left to lose is revealed. When a popular DJ listening in on a police scanner catches wind of his plight, he takes up the cause, spreading the legend of “the last American hero” far and wide.

This only intensifies the police’s efforts to capture this criminal (who has still only refused to stop driving so fast) and as the interstate investigation and pursuit climaxes, they zero in on his destination. How can he possibly avoid the police when they know where he’s going? As he willfully approaches the barricade swarming with police and curious bystanders, Kowalksi decides there’s only one thing he can do.

With the authorities intent on making an example out of him for amassing the most epic speeding ticket of all time, Kowalski still refuses to bend. Can’t stop. Won’t stop. He slams his Challenger full speed into the barricade, reducing himself and his beautiful automobile to flaming atoms while everybody watches, leaving the authorities to question whether all this was this worth a man’s life.

Some of us can’t deal with being arbitrarily controlled. Is the need to demand that we go only as fast as they’ll allow and stop when they stay stop really that important in relation to the value of freedom or human life? That moment where the hero of Vanishing Point chooses to own his own death by making it a defiant work of art rather than submit to authoritarianism is a shining moment in film history and it freakin’ owns.

The Girl Who Kicked the Hornet’s Nest 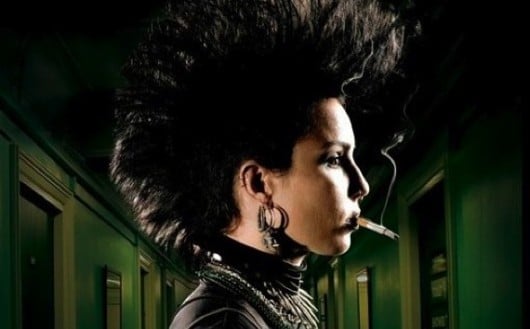 Enter Lisbeth Salander, the fabled girl with the dragon tattoo. She’s antisocial (possibly autistic), she’s androgynous, she’s a defiant feminist icon, and she’s a world class hacker with a brilliant mind and a photographic memory. By the conclusion of the trilogy, she’s kicked a lot of ass in several senses of the phrase including emptying the bank accounts of evil businessmen, setting her abusive father on fire, reversing the damsel in distress trope, and some things I’m not going to describe here. It stands to reason she makes some enemies and by the time it all comes to a head, she’s in a pretty bad place, framed for murder and going to trial with everything stacked against her. What do you do, hotshot? What do you do?

If you’re Salander, you make yourself look as offensive as possible to drive home the point that you have zero faith in a system that has failed you for your entire life with the most massive mohawk, Clockwork Orange make-up, as many piercings as you can muster, and a spiked dog collar to complete the black leather and metal ensemble. A criminal will try to present themselves as pleasantly as possible to a jury, shaving off aggressive facial hair, hiding tattoos, and wearing a suit for the first time ever when in court. But a boss will go out of their way to piss you off just because you ain’t shit.

In this moment, Salander is the epitome of punk. She’s Wendy O. Williams revving up a chainsaw while wearing electrical tape as clothing on stage. She’s Iggy Pop cutting himself with glass and smearing peanut butter all over his body before diving into the audience. She’s Sid Vicious butchering My Way in front of a room full of high society ladies. She’s Mike Muir ranting “I went to your schools, I went to your churches, and I went to your institutional learning facilities”. She’s an inspiration.

Being placed in a hopeless situation and refusing to play the damsel, with a simple fashion choice Lisbeth shows the ignorant tools of capitalist authoritarianism that she will not only refuse to pretend to conform to their ideals but no matter what they do to her, she is not going to stop being who she is and will in fact go out of her way to upset their concept of propriety just to spite them. And in choosing to own herself despite what the world may think of her, Salander earns an epic win. 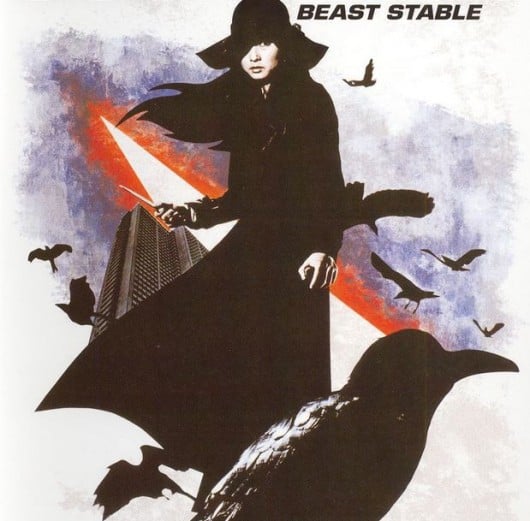 Female Convict 701 is a Japanese grindhouse anti-heroine icon and cunning master of vengeance preceding The Girl with the Dragon Tattoo by decades. Like Salander, she has been failed by a male-centric system and put into a situation where she is at the mercy of corrupt officials and subjected to every indignity they can think of for a young, pretty girl. But let’s just say she’s got some ideas of her own to go with one of the coolest get-ups ever.

Nami Matsushima is sent to prison after attempting to publicly stab the police officer who sold her to the yakuza as a rape toy. While in prison, she makes friends and enemies of the women and guards there and uses her own will and smarts to survive and escape, earning the nickname “Sasori” (Scorpion) for her ruthlessness. She often returns to prison voluntarily once she’s exacted her vengeance.

In the opening scene of Beast Stable, Sasori evades capture by hacking off the arm of an officer who makes the mistake of handcuffing her to him and then running through the city with the arm still attached. And that’s not even the most badass thing she does. These films are full of horrific violence and gonzo vengeance. After spending most of the movie hiding from the cops, a cruel madam forces our protagonist’s hand by doing something so unspeakably vile to one of her girls I shan’t speak of it before getting herself arrested to avoid her just desserts. By this time, our heroine has moved beyond personal vendettas and is becoming an angel of death avenging the downtrodden who have nobody to represent them.

Now let me tell you something. Nami is portrayed by actress Meiji Kaji, whom grindhouse and Asian cinema fans will certainly recognize as Lady Snowblood, title character of one of the most famous Japanese female revenge stories. And if you thought that aptly-named character was scary, you haven’t seen anything. Yeah, Lady Snowblood will chop your ass up, but Sasori is on another level. She doesn’t even need to touch you to destroy your soul.

After faking her own death whike being pursued by the authorities, Nami changes her identity and then gets herself deliberately arrested. Upon arriving at the prison, she commences staring at the evil madam; day and night. The target recognizes Sasori and becomes terrified, telling the guards that the Scorpion is going to kill her as they laugh her off. Even after bedtime, Nami just lays there, always staring. Normally, this would just seem silly, but Kaji-san truly has uncaring, inevitable death in her eyes. I freakin’ believed in the stare of doom.

Eventually, all of the patience pays off when the villainous madam is driven so insane she strangles a guard to death through the window on her door while Nami is mopping the floor outside her solitary confinement cell, thinking the approaching footsteps was the avatar of vengeance coming to get her pound of flesh. So her enemy successfully driven out of her freakin’ mind and now condemned for good in a prison hell, Sasori can finally rest (for now) knowing that she’s the only woman in the world badass enough to enact terrible and just vengeance on heartless exploiters of the downtrodden just by looking at them. 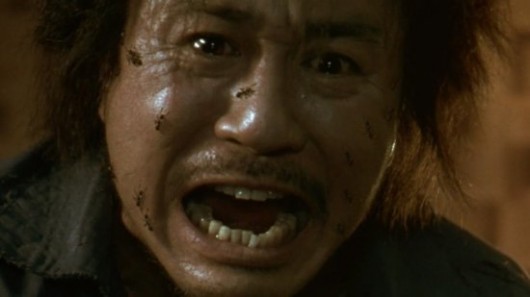 This one’s a true classic that I’m sure most of you are at least aware of, but I’ve got to include it because A) it’s one of the most insane moments in cinema history and B) it’s one of those rare acts of such utter and complete ownage of a protagonist that there is simply no way to ever live it down or get even. It’s the only film fit to anchor this list. If you aren’t aware of the original Korean film’s climax, stop what you’re doing and get that movie watched. You don’t want this spoiled.

Oldboy is the tale of a man, Oh Dae-Su, who is mysteriously kidnapped and comfortably confined for fifteen years before being simply let go one day. In this situation, you shouldn’t ask why you were locked up. Ask why you were let go. The search for the answer involves everything from consuming a live octopus in a bar whole to taking on a mob with a hammer to falling in love with a beautiful young woman. You know, the usual.

Eventually, Dae-Su confronts his tormentor and learns why he was taken. In school he caught the villain having sex with his own sister and spread the gossip around, disgracing him and driving her to suicide. Why was he let go? Well, that was a story best told in pictures, so Dae-Su is given a photo album that begins with his daughter –a toddler when he was abducted- that sees her get progressively older in each photo until the end of the album reveals a current picture of his lover. Yeah, I needed to rewind that the first time I saw it.

In a bizarre and convoluted plot to make Dae-Su feel his pain, he had him kidnapped along with his young daughter, hypnotized them each to fall in love with each other as adults over fifteen years, and then released them and arranged for them to meet. And that, my friends, is how you crush a man’s soul. No act of brutal revenge can ever make that better. And as an added bonus, it serves as food for thought by suggesting that since we cannot choose who we love, society has no right to condemn an incestuous relationship. It’s a long way to go to illustrate a point, but you’ve got to respect that level of dedication.