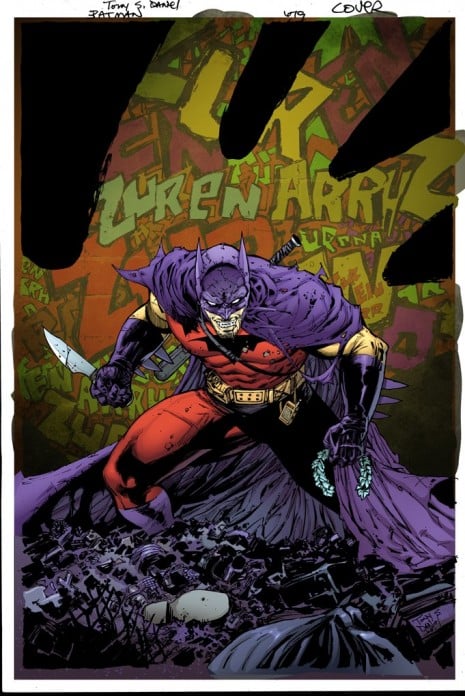 To understand the true duality in the dynamic between the Joker and Batman, you need to understand, they were birthed from the same thing: tragedy. If you read the brilliant Alan Moore masterpiece,  The Killing Joke, and you follow it as the seminal Joker origin story (which most do), than you know, The Joker got dealt just as crappy a hand by fate as Batman did.

Some would even argue, Joker got it worse. Losing your Father and Mother in front of you, especially when you are a child, is a tragedy. But some say having your pregnant wife die and then falling in a vat of acid that scars you for life in a heist gone wrong is even worst. And though both were born from tragedy, most think they turned out wholly different from one another, a yin to the other’s yang. But I would argue that point. Batman is just as fragile and mentally unstable as the Joker. He has just as many toys and is just as keen on playing dress up. He just happens to fight for the good side. But here are five moments that will make you question which one of the two is really the crazier one.

This really is one of my favorite Batman moments ever. It just drips with so much swagger. But it also hints at a darker, more sociopathic side to him as well.

Did you know that Green Lantern’s powers don’t work on anything yellow? If you are deep enough into comic lore you do, and Batman did, too. So when Green Lantern wanted to “talk” to Batman about some of his more questionable methods of fighting crime, namely using Robin, a young boy, to help him, Batman decided to take protective measures incase things got out of hand. He painted the entire room, and himself yellow, and calmy sat in the room, drinking lemonade. 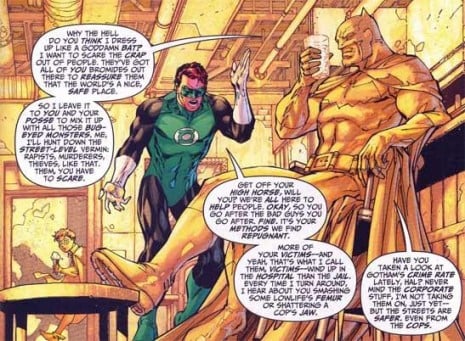 This scene just sort of sums up just how few f*cks Batman gives.

Now don’t get me wrong, this was not so much a moment of genuine insanity,but a moment of ingenuity and foresight. It was also the moment when the Justice League realized Batman was probably not one to mess with, and was perhaps just a bit more calculating then they had thought prior. For a guy with no superpowers, he really had the Justice League by the balls.

I began the list with this because it is just the slightest hint at just how tapped Batman can get.

Batman Laughs At The Killing Joke

Now I understand Moore’s whole point in this story was to show that the most extreme situation can break  the weakest of us. It also shows us, in between the lines, that it is sometimes the most insignificant thing that can push even the strongest of us over the edge. Though the whole book is filled with insane and memorable moments that would go onto become Batman canon, it is the final frame of the book, if you read it “right”, that is easily the most unsettling.

After the Joker has what can best be described as the worst day ever, and his sanity breaks (“all it takes is one bad day to reduce the sanest man alive to lunacy” is the best Joker line ever), we see him descend into darkness to do some truly terrible things. 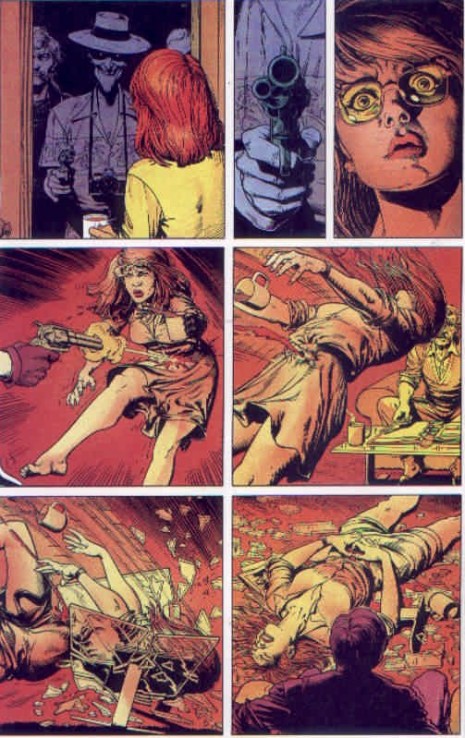 When Joker paralyzes Barbara Gordon is truly one of the most chilling moments in comics.

And then he does this:

Anytime people tell me that Ledger’s Joker is the most evil and anarchistic, I tell them to read The Killing Joke.

So he paralyzes Barbara Gordon by shooting her through the spine, and then he kidnaps her Dad, the commissioner, and sends him through a funhouse, driving him insane by drugging him and showing him the images of her, naked and bloody on the floor.

But you get to the end and the commish is ok. He is a steely, silver fox and seems to have made it out alright.

You know who isn’t ok, though? The Batman. And if you read the book quick or do not understand the name of the book or the message behind the story, this might be lost on you (I have seen MANY threads online that are filled with people asking why Batman laughs at the Joker’s joke at the end of the book. Sorry guys, you didn’t “get” it). I am getting ahead of myself, let me explain.

So everything is over. Barbara is crippled but alive, Joker is caught, commissioner Gordon is alright.

Now flash to  Batman and the Joker standing in the rain, and the cops are on the way.

So Joker tells Batman a joke (which I won’t ruin here) to which Batman start laughing, slow at first, and then louder and louder. The laughter quickly becomes contagious, and the Joker and Batman are standing in the rain, laughing their asses off.

What you need to realize here is that, an hour earlier, this guy that Batman is laughing with crippled one of his closest friends and tried to drive another one insane.

And Batman is laughing at his joke. Maniacally, even.

This was the moment that truly broke Batman. I believe Batman laughs here because he is already gone. The Joker is laughing because he knows he won.

He broke the Batman.

Some think the way the shot cops out of frame, that Joker actually gets choked to death by Batman here. Either way, Joker won.

Keep The Masks On

So we are all led to believe that the Batman thing is really a curse. Fighting to a free and save a city that will never be truly free or saved. Trying to stop madmen, knowing the moment they go down, a newer and more diabolical one will appear in their place instantaneously.  It is an exhausting job with no pay and little in the way of thanks.

So you would think Batman would embrace any opportunity he would have to take off his mask and revel in just being a normal person for a few.

Alas, that is not the case. 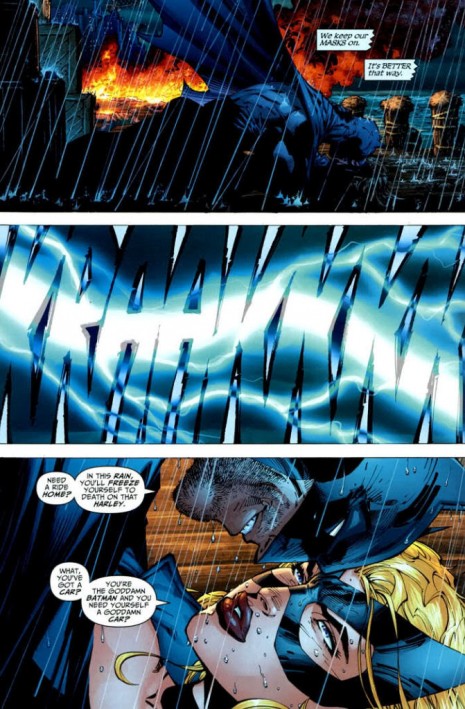 I hope he is wearing a bat shaped condom he invented for just such occasions.

Now we realize leaving the masks on is an identity thing to Batman, who has a lot to protect and a lot to lose. But that is not how they word it. They word it like he is a kinky freak who does this sort of stuff all the time. So he laughs at a madman’s jokes and leaves his mask on during sex. You guys starting to see the bigger picture yet?

The Man Who Laughs is an amazing Batman story, and that point is only driven home by how batshit insane Batman’s idea is here. He allows himself to get poisoned by the Jokers toxin in hopes he can take the antidote he created to counteract it. But he will not know if it works unless he tries it on himself. And he can not try it on himself, unless he gets poisoned by the Joker first.

Again, this man willingly took a psycho-toxin knowing full well that even if he lived from it, he would probably never fully be the same again.

Do you want to see just how insane it gets? Well, this is the moment when the toxin begins to seem just a tad bit stronger than Bruce: 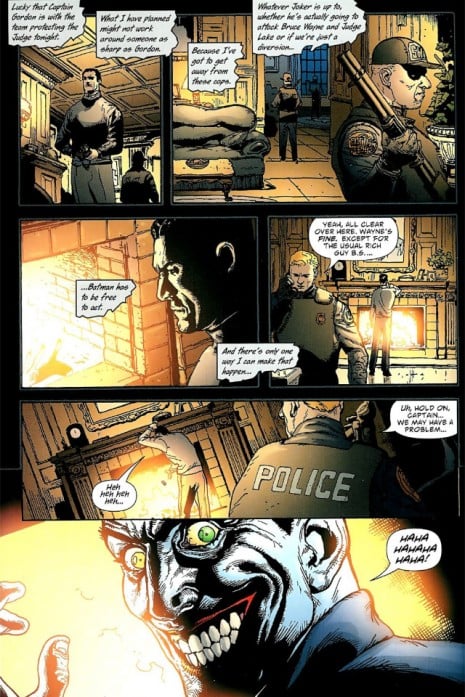 So for one glaring moment, Batman and The Joker were indeed, the same person. Sort of.

And though the story (obviously) has a happy ending, there are still such strong implications to willingly ingesting a psycho toxin. This was the Gotham City equivalent of Batman being willing to eat one hundred hits of bad acid in hopes the trip would “just pass”. Again, this gave us insight into just how far down the rabbit hole Bruce Wayne was willing to go.

This is not a normal man we are dealing with here.

You may have heard about this particularly insane moment in Batman’s history already, but really, it is all of Batman’s insanity coming to the surface, in glorious pastel fabrics. Before I say anything about Batman Of Zur-En-Arhh, I would like to take a moment to show him to you:

It is said this is his mental protection against the surfacing of mental traumas.

Though Batman of Zur-En-Arhh first appeared as an alternative universe version of Batman in the golden age, it was grant Morrison who brought him back, making him a sort of panic room in Bruce Wayne’s psyche if things get to be a little too much.

The best thing about this Batman is not only his insane clothing style, which screams ” I AM NOT WELL!” but his mindset, which is, well, insane.

He hallucinates Bat-Mite in this state (and Bat-Mite is awesome, so I can’t complain) and he tends to worry far less about whether he hurts people or not. Think of this as fight or flight Batman, from a psychological standpoint. 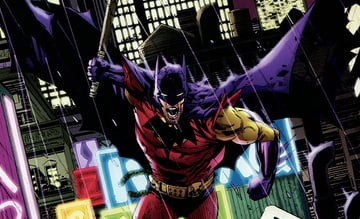 There should have been a whole gang in the movie The Warriors that dressed like this. The Batman Furies.

And anytime I find myself wondering who is more insane, more of a sociopath, and more of an overall madman, I no longer think of the Joker.

Even the Joker would find this Zur-En-Arhh outfit garish.

That poor man stuck in the moment from his childhood when he couldn’t do anything to stop the tragedy that would go on to both haunt and define him. And Batman himself, trying to overcompensate for that loss in any way he can. And while he may fight on the side of good, it is only a matter of time before this man breaks completely, a moment many think has already happened. And what then?

What happens when the good guy with all the money and gadgets decides he can’t take anymore? Well, ironically, he turns into the Joker at that point.

So you see, one cannot exist without the other, and in that sense, they are one and the same. There is much that comes with wearing the cowl, and torment and instability seem just as essential as heroism.

The Dark Knight Returns: From breaking the bones of the mutant leader, to killing Superman (and kind of dying at the same time) this proved old age Batman is the most insane and unstable, but also the most awesome, of them all.

Year One: There are many moments, but the scene where he causes the car wreck so he can escape the police car showed just how dark a road Bruce Wayne would travel down as Batman.

The Resurrection of Ra’s Al Ghul: Batman gets speared through the stomach with Ghul’s staff, and it does little else but piss him off. This is the first time I wondered if Batman was on meth.

Kingdom Come: Batman gives zero shits about protecting his private identity at this point, and walks around as Bruce Wayne, with people just calling him Batman. He has silver hair and a crazy steampunk-neck contraption, and he STILL kicks ass with little regard.

Final Crisis: Batman breaks his number one rule and shoots to kill. Only he shoots  Darkseid, which just pisses off Darkseid and causes Batman himself to get killed. Instant karma, man. And though Batman was not “dead” in the normal sense( he was hurtled through time, ofcourse) it still showed that when it comes right down to it, Batman is f*cking crazy and will do whatever it takes. 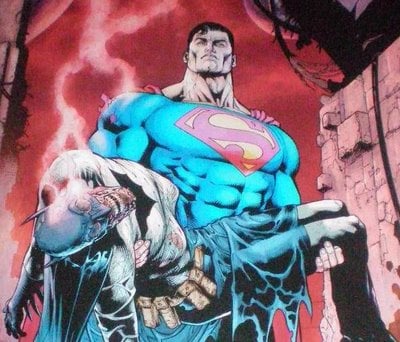 See what happens when you break your own rules, Batman? 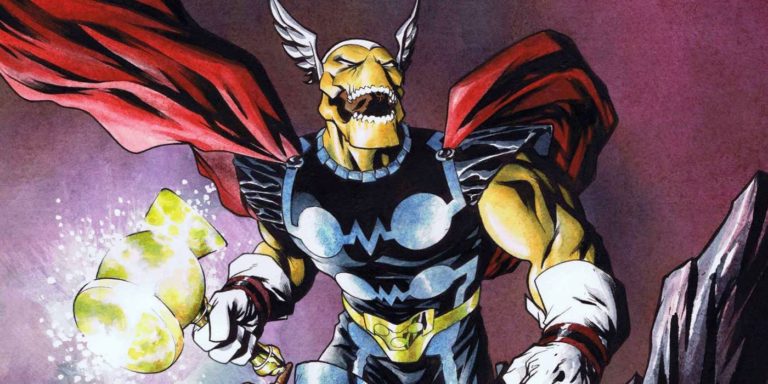