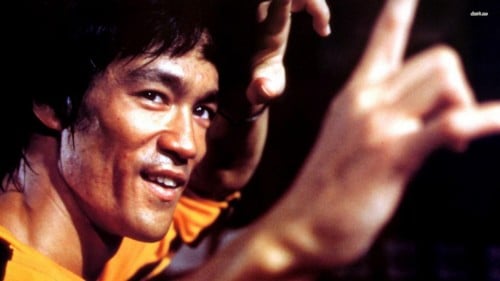 Now, most of us all think of the same thing when we hear Bruce Lee’s name: the guy who kicked all the ass.  ALL.  OF.  IT.   We think of the impossibly charismatic movie star who changed the worlds of film and martial arts permanently in a mere 32 years on this earth before being taken from us.    We think of his epic showdown with Chuck Norris in the Roman Colliseum.  We think about how “Enter the Dragon” is indisputably one of the greatest action films of all time.  We think about all the times weve kicked and punched the air with a high-pitched “WAAAH!”  We think of one-inch punches, two-finger push-ups and other superhuman feats we would not believe were possible if the videos didn’t prove they really happened.   And some of us think about all of those who have tried to follow in his footsteps;  the Hong Kong Brucesploitation travesty featuring films with actors named Bruce Li or Bruce Lei (to name two) that existed only to trick people out of their money or the plentiful video game and anime characters who have bared his likeness.

Any way you cut it, Bruce Lee was a visionary whose shadow is still cast over every martial-artist, action hero, and colorful media personality to this day.  But what a lot of people don’t know is the true breadth of his influence in the non-asskicking arts.  Philosophy, poetry, film choreography, fitness, and nutrition are all areas where Lee made major contributions and blazed trails.   I grew up watching “Kung Fu Theater” on Saturday afternoons and always knew Bruce Lee was The Man, even when I was too young to appreciate why.   But looking back on those classic films from an adult perspective and looking deeper into a man who has always captivated the world revealed to me a man with a brilliant mind to match his physical prowess and magnetic charisma.

For my first contribution to Unreality, I’ve decided to pay tribute to an under-appreciated aspect of a personal hero of mine whose words have provided guidance to me in the best of times and in the worst.  And in doing so, I can offer up a little slice of my worldview as a form of introduction.  Let’s do this. 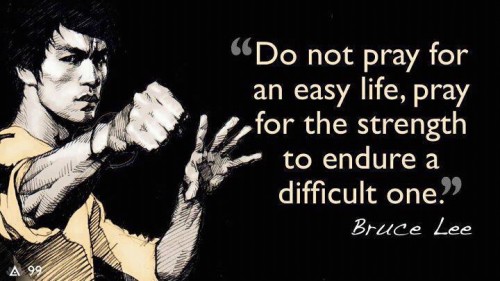 I once saw an entry in a contest where people were asked to tell their life story in exactly six words.  One of the entries was “Painful nerd kid, happy nerd adult.”  That pretty much sums up my experience.  There was no small amount of catharsis in watching Bruce beat up bullies with his special brand of style of swagger as a child.  I obviously didn’t have Lee’s skills or his confidence and i didn’t even wanted to beat anybody up, but nonetheless his iron will and rebellious attitude inspired me.  I’ve been through the fire over and over and only got through it by sticking it out, and I’ve been rewarded for my perseverance    If you choose to crumble at the first sign of hardship, you’ll never reach your true potential or achieve even a modicum of peace with who you are.  And there is likely no greater satisfaction than in knowing that who you are is someone who can take whatever life throws at them. 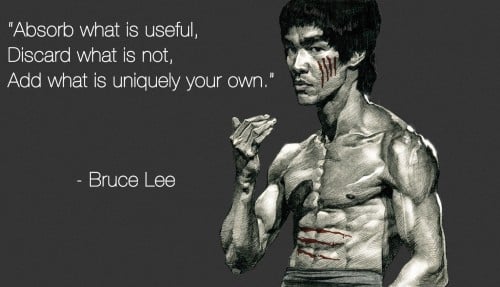 This is the philosophy that Lee used to create his own style of martial arts, Jeet-Kune-Do (Way of the Intercepting Fist), and in doing so pioneered the sport we know today as mixed marital arts.  Choosing to outgrow his traditional kung-fu background, Lee studied fighting styles from around the world, simplifying them and coalescing them into a mindset of a “style without a style” that could potentially counter and defeat any single form of fighting.

But I am not a fighter.   What do I care about Bruce Lee’s asskicking methods?  Well, like any slice of good philosophy, the application was intended to spread beyond it’s original context.  Any art -martial or otherwise- is a form of self-expression with ample room for good, bad and everything in between.   Some things simply work for you and some do not. I briefly tried being a musician.  I wasn’t good at it.   I’m better at analyzing and understanding pop culture than I could ever hope to be at creating it.  That’s who I am.

Finding out who you are, what you are good at, and what you should do are some of the most important things in life.  And whatever it is you are good at and choose to do, odds are there’s a ton of people out there doing the exact same thing.  But your blend of life experiences that shape your world view are unique to you, and by utilizing that which is yours and putting it out there, you find your voice and stand out from the crowd.

This is one of Lee’s most famous quotes, and for good reason. While being yourself is immensely important in any artistic endeavor, one must also realize that the world is what it is and other people are who they are.  Flexibility and the ability to adapt to the world around you are tantamount to a truly happy existence.  Again, this is true not only in fighting, but in all things.

If you strike a body of water, it doesn’t break; it adapts, compensates, and forms itself around your blow.   Likewise, an open mind is willing to absorb any sort of idea and make the best of it whereas a rigid thought process will often react to foreign concepts with rejection and anger, solidly opposing it and emotionally breaking in the process.  Water can go anywhere, it can be liquid, solid, or vapor,  it can erode away mountains to dust, it gives life and it can take it away.  By broadening yourself to be able to be what you need when you need it, you empower yourself with infinite potential.  Like water.

I could easily have done this entire article using only “Enter the Dragon” quotes.   Lee’s philosophies often emphasize simplification and action over contemplation, and the first part of this quote epitomizes that.  “Don’t think, feeeeeeeeel“.   That is to say that once you know who you are and what to do, all you need to do is get to doing it.  Once you’ve trained your mind (or body) to do what it does, all you can really do is throw yourself in there and go for it.

The second part of this quote seems to me to be about internalizing the teachings rather than the teacher.  The words of people like Jesus Christ, Gandhi, Martin Luther King Jr., Bob Dylan, and Bruce Lee are known to billions.  But so many people idolize the men themselves and forget that the messages they represent are what matter.  A man is just a man, but ideas can’t die.  It’s by understanding and following the examples set by amazing people that you truly appreciate and immortalize them, not by idolizing them unto themselves.  Use their teachings for your own benefit rather than blindly following another human being.  In other words, the teacher is just the finger to show you a new worldview.  Once you’ve been shown where to see it, look at the world through your own eyes. 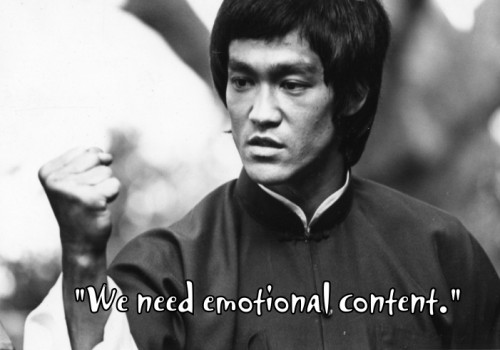 This one is not only from the same film as the previous quote, but from the same scene, where Bruce is teaching an aspiring martial artist and lamenting his half-hearted participation.  It probably sums up the theme of this article in the concisest manner possible, and should be the rallying cry of any creative endeavor.  I hear Lee say this line in my head all the time.  Hopefully that’s not a precursor to schizophrenia.  Be it music, writing, dancing, drawing, fighting, or any other form of expression, if you aren’t feeling what you do and making somebody else feel it as well, you are likely doing it wrong.

The name of this site, Unreality, brings to mind a lot of things.  To put it simply, it stands for the place we go to get away from real life for a while.  But beyond escapism, some of us who travel through the lands of film, television, comics, video games, and the like come back with a new perspective; some little bit of wisdom garnered from metaphor and allegory that sticks with us and helps us get through the real world with our psyches intact while thriving as individuals, and maybe even contributing a little something of our own to the world.

I watched Bruce Lee beat up the bad guys as a kid and cheered him on knowing it was just a temporary reprieve from the bad guys in my real life.  But long after the last onscreen villain got his comeuppance, Lee’s words stuck with me and helped me become a more self-actualized adult.   And that, my friends, is why we need emotional content.  To put all of ourselves into whatever we do and create, because you never know what you might accomplish and who you might inspire.

It’s been a “it’s probably going to happen” rumor for a while now, but according to Kiefer Sutherland, a 24 movie is going forward at last, and it’s set to start shooting this April. For…

This is the internet, so when you tell me that people are remaking movies start cats, color me not surprised. I’m sure there are a bunch of these, but I think The Hunger Games with…

What a better way to wind down February with This Week In Movie Trailers! How was everyone’s week? I don’t want to speak too soon, but had a great one myself. Kind of on a…

2 out of 5 stars You know, I’m tempted to start to be sick of “found footage” horror films, but really, you can’t argue with results. I appreciate the format in many effective horror films,…

I am striking hard with this one. One of my favorite animated fantasy movies of all time, but one very many nerds don’t know about. Fire and Ice is the surreal meshing of Ralph Bakshi’s…

Whimsical artist James Hance is back with another beautiful piece, this time imagining what it might be like if Leia fell for Indiana, not Han. It’s technically cheating, but doesn’t feel like it given the…