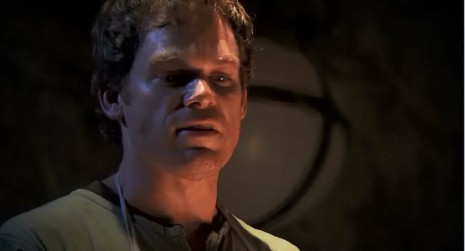 Really, Dexter? You made me sit through unequivocally the worst season in your history so you could give me exactly ONE minute of relevance at the very end?

Needless to say, something very, very significant happened in the closing moments of the Dexter season finale last night, and join me after the break so we can discuss it away from the ears of those who don’t wish to know yet. 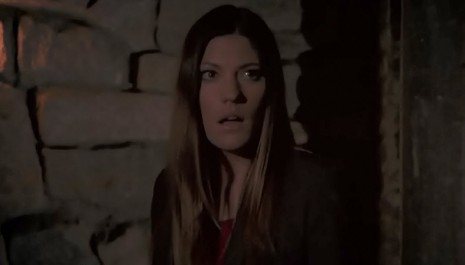 At long, long last, after years of ignoring every possible clue, Deb finally knows about Dexter’s darkness. She walks in on him executing Travis Marshall, and after twelve weeks of relative inanity, it finally seems like the show is going places.

But first, we should probably rewind. The Doomsday plotline went out with a whimper, rather than a bang, as the episode title implies. As it turns out, Travis had no ultimate world-ending plan up his sleeve, and was content to wait on top of a building for God to whisk him away and destroy the earth himself. I can’t help by think it would have been a more  humorous ending to just leave him standing there after the eclipse, wondering what the hell he should do now as he slowly shuffles away. You had to wait for the MAYAN apocalypse in 2012, idiot!

Anyway, Dexter foils his plan, and has extra motivation to do so seeing as his son was to be the final sacrifice in Travis’ “make shit up as you go” plan. Oh this guy who came knocking is a cop? Time to gas Miami Metro homicide. Oh, Dexter has a son? Yeah sure, throw him up on that altar then. God’s will is kind of freewheeling it seems. 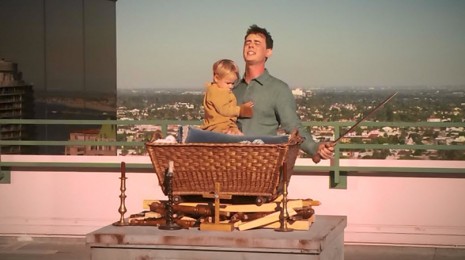 “Err wait, was I supposed to grab the kid dressed like a lamb?”

I’ll ignore stupid moments like Dexter bashing in his own face on the wall, as I’m sure a cop saw that mural before it was defaced and would have reported it as such. And as for how Dexter imagined that Travis would tell him to inject himself, and prepared a fake needle accordingly, I don’t know. Maybe he always just has one on him in case that scenario ever crops up. And really, did Dexter need to off that Cuban? I know the show is about serial killing, but we’re getting a bit casual with it here.

But again, it’s hard to avoid the main point of this episode, and thus this entire series, the fact that Deb now knows Dexter’s secret. Well, some of it anyway.

I see what the show was trying to do with this idiotic “Deb loves Dexter” plotline. They were setting it up for this moment where Deb CAN’T turn on Dexter because she’s his sister AND she’s in love with him, which somehow equals “double love” that’s incapable of being broken by such a silly thing as mass murder. I would have been perfectly content with them skipping the whole gross love story, and her just protecting him out of brotherly love, as I would have bought that she would have done that WITHOUT the urge to get in his pants. Her love for him now makes every scene with the two of them unbearable, and speaking as an adopted child, this idea that just because you’re not really related to your family, that you can fall for them, is complete bullshit, and EXACTLY as gross as it sounds. 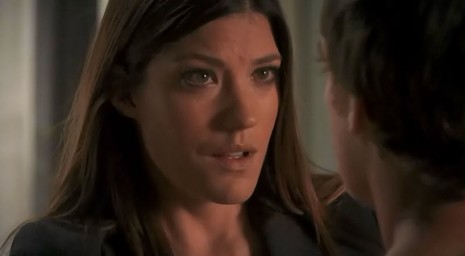 The big question, of course, is what happens now? Something we’ll have to wait probably another 8 months to find out.

Dexter could explain away this kill by saying that Travis kidnapped Harrison and he wanted revenge, free of the police. Sure, he’s still a murderer, but he’s not forced to tell her the other 99% of the iceberg that sits under the surface. She didn’t hear him say he’s a serial killer, so perhaps he could get away with it?

But the scene she walked in on is the key most likely. They did know that the Bay Harbor Butcher’s M.O. was strapping people down with plastic and knifing them in the chest, right? That was like five years ago, but I do believe they had that much figured out. Not to mention that it’s pretty obvious Travis is a serial killer, and potential Butcher target. If this is the case, Deb should put it all together and have no choice but to realize that Dex is the Butcher.

Even THAT however, is not the full story, as she’d have to learn about the deaths of Brian, Doakes, Miguel Prado, Trinity, Jordan Chase and his team, and all the other murders since the Butcher’s alleged demise. She’d had to learn about Harry’s training of Dexter into this killing machine, and finally figure out if despite all this, Dexter is the same person he always has been. With a hundred or so death notches in his belt. 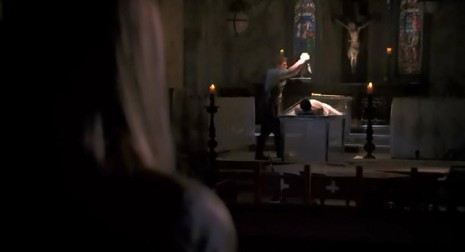 The part about Dexter I’ve never bought is that he’s always claimed to be a monster. But in reality, punishing mass murder with death doesn’t seem to be monstrous at all, and protecting the innocent has always been Dex’s utmost priority. Yes, he works outside the law, and has the brain chemistry required to kill without thought or remorse, but monster? I don’t think so.

I’m of the notion that Deb should just learn everything early next season. There’s no point beating around the bush and having her spend an entire season uncovering all of his misdeeds, so it’s better to get it all out in the open right away now. These last two seasons are supposed to be a structured arc and wrap-up for the show, and now that Deb knows, it should be the catalyst for all that to start.

Noticeably absent from the finale was Lewis, who the show is setting up to be a major player next season. Travis opened Dexter’s package containing the defaced Ice Truck hand, but I doubt he’ll find that for a bit after what just happened with Deb. He seems like he’s going to be the Riddler to Dexter’s Batman, getting inside his head, and I’m looking forward to seeing what he can do as a foil.

Again, I think the vast ,vast majority of this season has been a giant waste of time, but it’s hard to deny that this is in fact the biggest development in the history of the show, bar none. This moment was skirted around many times, but now there’s no going back, and I can’t wait to see what Dexter and Deborah do next.