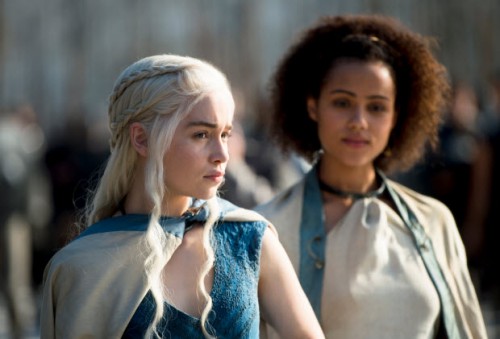 The Game of Thrones season four finale is this weekend, and considering they’ve already submitted it for Emmy consideration, it should be something of a barn burner.

And yet, a looming question remains. What happens when Game of Thrones runs out of road? It could be argued that this is starting to happen already, with plotlines like Brienne/Pod and Littlefinger/Sansa already getting dangerously close to their Feast for Crows/Dance with Dragons conclusion. The next two book are really like one super giant book split up by characters, not by chronology, and that can pose a problem.

Within a year or two, that means Game of Thrones will either have to stop completely, or start venturing outside of A Song of Ice and Fire. Yes, The Winds of Winter is being written, but it takes Martin an enormous amount of time to craft these books, as you can see:

So, what should happen when the show inevitably catches the books?

Here are the options as I see them:

A) Winds of Winter is released to forestall the inevitable for at least another year.

B) George RR Martin simply tells the showrunners what he’s going to do, and they move ahead while he writes to catch up.

C) They take a break until he’s ready with more content.

D) They try to do some interim spin-off type thing like Dunk and Egg.

E) They slow the show way, way down, adapting literally every single piece of the remaining books to fill time, including arguably boring subplots like the Iron Islands and Dorne.

It’s hard to see any of these as terribly good choices. You don’t really want Game of Thrones moving forward NOT based on something Martin has already written. Then again, you don’t want to take two or three years off and wait for him to get another book done. So what to do? And that, my friends, is the debate of the day.

Well, that didn’t last long. Last week, I was just praising The Walking Dead for taking the Governor in the a different direction than the comic. For reining in his psychopathy and allowing him a…

Well, after featuring College Humor’s Internet House Sigils from earlier today, I thought I’d try to see if I could fashion one for Unreality as well. I think I got the general style down, and…

The finale of True Detective is this weekend, concluding the debut of the undisputed best new show of the season. The murder mystery goes far beyond the usual trappings of the genre, and has proven…

MTV is a lot like the story of Icarus. It was small, but had huge aspirations. It was that boy who wanted to fly. Then, miraculously, it flew, and flew for quite some time. Then…

Quite recently, I was told to watch this British show called ‘Black Mirror.’ My friend described it to me as: “Think Twilight Zone, but in a techno dystopian setting.” I was sold on that phrase…

httpv://www.youtube.com/watch?v=R55e-uHQna0 I’m always happy to show well made commercials on the site here free of charge for advertisers, but that’s something that happens extremely rarely as most ads today are kinds of…shit. Thankfully that’s not…