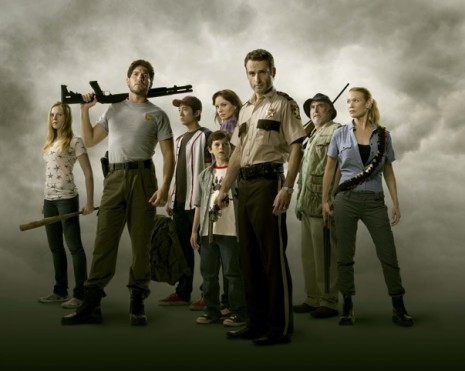 This is a question I’ve been wrestling with for a while now, and since I’m not doing weekly reviews of The Walking Dead, I wanted to open it up to the public.

I think it’s easy to be blinded by the fact that a well-produced, gore-filled show about the zombie apocalypse exists. Such a thing is awesome purely as a concept, and so I think we’re predisposed to forgive it if it it’s lacking in other areas like writing or acting.

I look forward to the show each week, but I always end up cocking my head at the end of the hour and saying “that’s it?” For example, last night was about the fifth episode in a row about an unfruitful search for a girl, and it’s becoming clear that perhaps this one incident is seriously going to be the main storyline for the entire season. 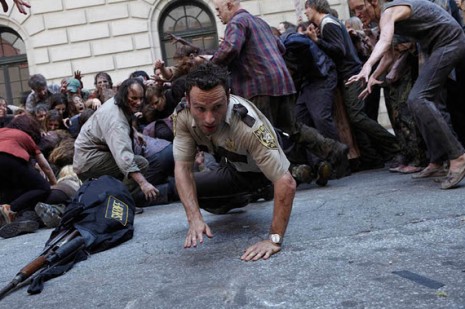 This is one of the show’s main problems: direction. It’s always kind of a problem in zombie apocalypse movies when you have to ask the question “where is this going?” Usually, in a two hour film, you can be alright with just “survival” as the end goal, but here? With a show that’s on like it’s 12th hour out of God knows how many? You need a more clear endgame. It used to be wandering to the CDC, which was trashed, then it was wandering to a military fort that has probably zero percent chance of being safe at this point. But that got interupted to spend this whole season wandering in the woods or camping in a farmhouse looking for a singular girl. Hardly he most compelling plot device especially when it’s a character we care next to nothing about.

This brings me to my next point, I would argue that we care very little about MOST of these characters. The show just hasn’t developed many well-rounded, sympathetic or interesting characters. I would argue that the ONLY two interesting characters on the show are Shane, particularly with his recent hard call with Otis, which was one of the show’s best moments, and Daryl, who is just a great character through and through, and I’m glad he got a spotlight on him this episode.

But everyone else? I hate them, I really do. The old man, the blonde idiot, the asian guy, the black guy, the battered mother, Rick’s perpetually miserable wife and Rick himself. NONE of these are good characters in the least, and no matter how much the show stays away from zombie killing to focus on them, they never seem to get any more interesting and engaging. Rick is finally start to undergo some moral struggles, but I’ve said before that Brit actor Andrew Lincoln goes way over the top with the whole cowboy thing, and seems like a caricature too often. I’m also not a fan of Sarah Wayne Callies, last seen in Prison Break, who only has only acting speed in anything I’ve seen her in, frantic/crying, and it gets exhausting.

It’s also apparent that the show’s budget has been cut pretty hard this season. Where we used to have entire cities full of zombies, now we get what, two lumbering walkers per episode? I understand cutbacks but it’s like watching Avatar 2 in 2014, and 95% of the film takes place in a dank spaceport in Boston with the last five minutes full of Na’vi and the rich CGI forests of Pandora.

That said, when the show is good, it’s really good, it’s just that these moments don’t happen enough. Do you think The Walking Dead is a good show? What’s it doing right or wrong?

(click for wallpaper size) So I felt like doing something artsy yesterday and decided I’d make an Unreality desktop wallpaper to share with you all. I wanted it to encapsulate what the site’s all about,…

I may have linked to this already, but it’s worth featuring in full all the same. In “House of Thrones,” Frank Underwood does his best to manipulate his way to the throne. While the concept…

httpv://www.youtube.com/watch?v=9XoKD8Gh-tE&feature=player_embedded# Hollywood is turning every childhood memory you’ve ever had into a movie these days, and if you think something as innocent as Doug will be able to escape their clutches, you are probably going…

Everyone who reads anything on Unreality should know what Dragonball Z is…right? If you haven’t and happen to utilize Hulu then you can view all the episodes that way or find a site like animefreak (or…

I’m currently swinging my way through the streets of Arkham City like many of you probably are. I’ll have a review of that up next week, but in the mean time, here’s a bit of…

Mondo has a way of rounding up truly incredible artists, and that’s certainly the case here with this collection from Kevin Tong and Martin Ansin. They’ve collaborated for a new show that has art from…