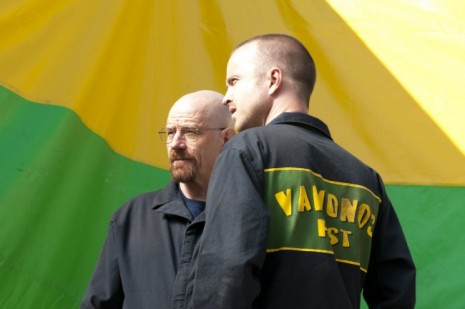 While I had my doubts about last season of Breaking Bad, this one is shaping up to be undeniably fantastic. The first half of season three was mostly clean-up, and really, the rest of the episodes were loose ends involving Gus. Not bad, but it did seem to drag at points.

This season? Far different. It’s essentially like things are starting over from scratch as Walt and Jesse get back into business, although the Walt we see now is one far different than the man running around in his underwear in the pilot episode.

After “Hazard Pay,” I’m now convinced that the speculation is true and Walt really has become the central villain of his own show. He’s in subtle conflict with practically every other cast member from Mike to Jesse to Skylar, and is more menacing than he’s ever been. Gone is the shriveling figure always worried about getting caught, and in his place is a full-on drug kingpin. Well, at least a wannabe drug kingpin.

Walt’s finding that running your own business is a rather tough prospect. Gus had years of infrastructure and a huge support staff.  Starting over, Walt has almost none of that, and has to build from the ground up with only a few things already in place. His decision to cook at bug bombed houses is rather brilliant, but I’m sure there are going to be a hell of a lot of hiccups along the way.

They’re already starting, in fact. Skylar is on the verge, or in the middle of, a complete mental breakdown now that she’s realized her husband is something of a monster. We’ve never seen her this on edge before, and I said last week I wouldn’t be surprised if we saw her dead by the end of the season. This week, I’m saying I wouldn’t be surprised if it was Walt who killed her. He’s that intense right now.

My question from last week was answered about whether or not Mike is getting back in the game to replace his own hazard pay, or pay back the others that are owed. It’s the latter, showing that Mike is a stand-up guy who takes care of his own, and again, less of a villain than Walt who made it pretty clear he wished these other parties were dead.

Most interesting perhaps were Walt’s interactions with Jesse. The two seem to be together as the dream team again, cooking the blue, but Walt is making not-so subtle hints that Jesse better stay in line if he knows what’s good for him. I think Jesse broke up with his girl because he thought it was the right thing to do, to not involve her. Though it does seem sort of sudden, as that relationship has been developing for a long while now. Is it really over? 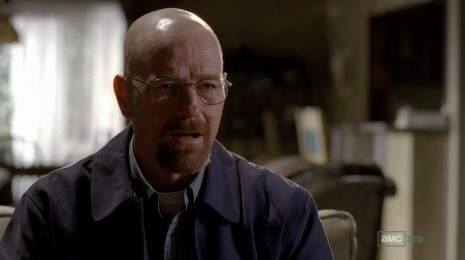 Walt’s statement  at the end was going a bit too far for me. It seemed like a direct threat at Jesse which doesn’t seem particularly helpful, especially since the two of them only recently patched things up. He seemed to be implying that Victor deserved to get his throat slit for trying to strike out on his own, though there aren’t any indications Jesse would do that.

I guess I wonder why exactly is that Walt thinks he’s this immortal drug lord now. The juxtaposition of Scarface was great here, as clearly that’s how Walt views himself. But is that perspective warranted? Gus had an army of thugs and cartel backing that made him powerful. What does Walt have? Sure, he’s killed a few people, but if push came to shove, Jesse or Mike could easily overpower him, and he has no army. He’s acting like he’s invincible and with his competition dead, I suppose I can understand how he feels that way, but I think he’s going to be in for a hard lesson if he keeps acting like he can’t be touched. And it doesn’t seem wise to spar with Mike or Jesse after he’s just managed to set this fragile partnership up.

Amazing bonus moment of the episode, the return of Badger and Skinny Pete, where we learn that Pete is quite the piano virtuoso in addition to being a meth head. Also fantastic is the appearance of Friday Night Light’s Jesse Plemons as Todd the bug guy. With Walt asking him his name, I assume that he might have a more prominent role in coming episodes.

I have no idea where this season is going, and I love it. I think Walt is heading for a Tony Montana-like fall at some point, when his tough talk needs to turn into tough action once more. And if he treats his friends like enemies, he’ll have no one at his back when that time comes.