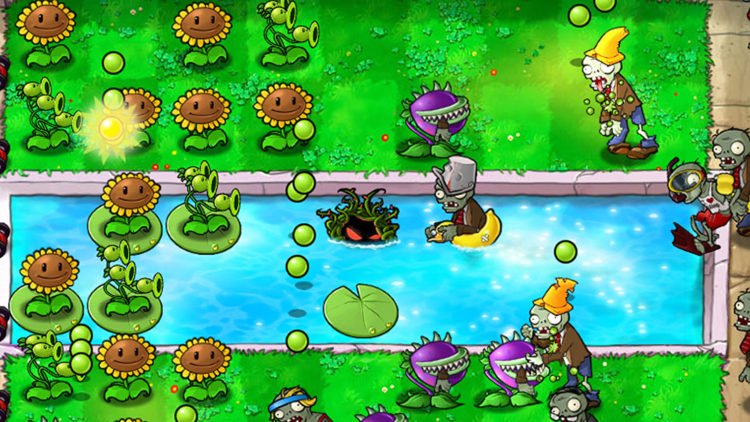 Plants vs Zombies is an iconic series that took the world by storm and made them think twice about how they tended their garden. It was a pretty outlandish concept when you think about it, plants against brain-eating zombies. As the player, you would plant different kinds of plants with differing abilities and hope that they were strong enough to put an end to the zombie waves. Tending to your garden is synonymous with saving the world in this game which drew many to it. Plants vs Zombies became one of the biggest games on mobile and pushed the franchise to new heights with spin-offs and even a third-person shooter game which was popular enough to get two sequels. With everything going in Plants vs Zombies it can be a bit overwhelming so we wanted to slow it down and just go down the list of games in the franchise and see which ones are worth checking out and which ones don’t need any watering from you.

The original Plants vs Zombies that started it all. It’s a lot of fun and it’s the reason that the franchise was catapulted into success. The concept is simple, tend to your garden and place plants with supernatural powers to protect your home from waves of zombies that want to take your brains. It’s a lot of fun and features some of the original iconic plants like peashooter, sunflower, and Wall-nut. There was also a Zen Garden mode which allowed players to take a breath and tend to plants in a normal garden with no zombies.

Synopsis: “Zombies are invading your home, and the only defense is your arsenal of plants! Armed with an alien nursery-worth of zombie-zapping plants like peashooters and cherry bombs, you’ll need to think fast and plant faster to stop dozens of types of zombies dead in their tracks. Obstacles like a setting sun, creeping fog, and a swimming pool add to the challenge, and with five game modes to dig into, the fun never dies!”

With a sequel comes to change, and Plants vs Zombies 2 did it in a big way. Plants vs Zombies 2 allows you to defend your garden across different points in time. Not only that but it also introduces seed packets that allow you to change your plants in different ways. You can gain new abilities, speed up their attack, and even increase their defense. It’s fun to see how the environments change with maps introducing Ancient Egypt, Space, and even the Wild West.

Synopsis: “Play the award-winning hit action-strategy adventure where you meet, greet, and defeat legions of hilarious zombies from the dawn of time to the end of days. Amass an army of amazing plants, supercharge them with Plant Food, and devise the ultimate plan to protect your brain.”

Plants vs Zombies 3 is a brand new game in the series which just had its soft launch in September 2021. The full game has yet to see the light of day but it’s been years in the making. This game will help you rebuild Neighborville by defending different gardens. We’re excited to see what new things it’ll be to the series when it finally releases.

Synopsis: “Rebuild Neighborville and battle the fun-dead in the latest installment of your beloved tower defense game series — Plants vs. Zombies 3. Defend your town (and brain) from hordes of zombies with all-new levels, mechanics, and characters. Adventure and gruesome gardening in Neighborville have never been sweeter!”

Garden Warfare is the first game in the series that completely leaves the garden in a third-person shooter game where you can be both plants and zombies. Garden Ops lets players relive the magic of Plants vs Zombies by allowing you to pick four special plants that you must use to defend yourself from ten waves of zombies and finish with an epic boss battle.

Synopsis: “Plants vs. Zombies™ Garden Warfare digs into the trenches with an explosive new Co-op and Multiplayer action experience. Blast zombies and plants across a mind-blowing world that delivers the depth of a traditional online shooter blended with the refreshing humor of Plants vs. Zombies.”

Garden Warfare 2 ups the anty on everything that made the original great. There is now a hub world known as Backyard Battleground where you can access portals to missions and even join a game mode known as Flag of Power where you and other players fight for control of the hill. This mode introduces new variants of every plant and zombie to allow players to cater to their playstyle like never before. Each of these variants also come with their looks and costumes to help you stand out. Garden Ops returns, but this time Zombies also have a chance to shine with Graveyard Ops. Here you take control of zombies and defend your graveyard from plants.

Synopsis: “Long after the events of Garden Warfare during the long, crazy war between Plants and Zombies, the Zombies have finally conquered Suburbia and renamed it Zomburbia. Now, for the first time in the series, the Plants are on the attack, and it is the Zombies’ turn to defend their newly claimed homeland. Six all-new heroes join the battle with brand new abilities, from the past, present, and future. As a plant, your mission is to become an agent of L.E.A.F., by doing plant-based story missions. As a zombie, your mission is to become Top Zombie, by doing zombie-based story missions. This includes training with Agent Rose, Agent Citron, and Agent Corn or Steve, Super Duper Brainz and Ol’ Deadbeard.”

Plants vs Zombies: Battle For Neighborville

Plants vs Zombies: Battle for Neighborville is the third entry in the series that followed the third-person gameplay mechanics and expanded on the free roam components of the game. It has three different regions that players can explore and up to twenty different classes for players to customize. It introduced a weekly challenge event that would allow players to hop in and switch things up if they were tired of the regular modes the game came with.

Synopsis: “Welcome to Neighborville, where all is well. Except that a crazy new coniferous conflict between brain-less and botanicals is brewing. Join us as a Founding Neighbor in this early edition and be a part of the community that battles for Neighborville ahead of worldwide launch! With the Founder’s Edition, you’ll play through six weeks of weekly content releases as we progress towards worldwide launch on October 18. Earn exclusive rewards for the first four weeks when you log in*, become part of the Founder’s community, and help make Plants vs. Zombies: Battle for Neighborville™ better for all just by playing. It’s a no-brainer! You also get to be one of the first on your block to experience the game – even Zomboss will be jealous when you tell him. Over the six weeks of content drops you’ll enjoy 20 fully customizable character classes in one social region, three free-roam regions, one PvE mode, and six online multiplayer modes, including Battle Arena, with split-screen couch co-op** in every mode.”

Fallout 3 is a game that changed my life. Well, maybe it didn’t change it, but it came pretty damned close. I decided to get Fallout 3 on a whim whilst perusing the used game…

I’ve been playing Dragon Age: Inquisition for the past uh, 15 hours or so, and it’s been the first time I’ve stepped into a fantasy video game world (that wasn’t LOTR-based) since Skyrim. Bethesda’s game…

(click for full size) I’m no huge Game Informer fan, but damn do I always look forward to their covers. They’ve outdone themselves this time by hiring fantastic artist Sam Spratt, who we’ve featured on…

From P3ncilPusher comes a look at what life as a world famous street fighting celebrity is like. Glad to see E. Honda’s skills can be put to use pleasing fans. At this rate he could…

httpv://www.youtube.com/watch?v=UDjeO1wCJmo What you see here is a prototype game called Card Sagas Wars (?) that will inevitably get shut down by the copyright police when it gets too popular. It’s an 16-bit fighting game that…

People often ask me why Unreality doesn’t write about music in addition to movies, TV and video games. Surely it’s the next logical category, right? I’m not sure I see it that way, while music…