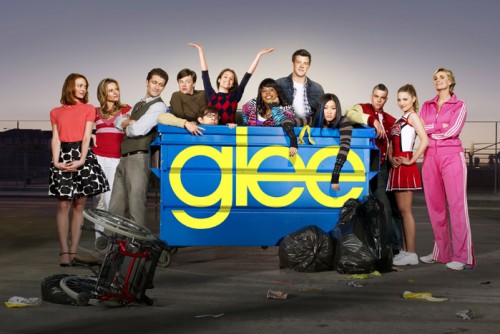 Sometimes I get sucked into bad TV shows.  I’m willing to overlook some pretty terrible flaws if a show has the right things going for it.  I mean, David Duchovny alone was enough to get me through several seasons of Californication, even after I realized it was basically a song stuck on repeat after a few episodes, and the lyrics were “Hank Moody’s penis gets him alternatively into, and then out of trouble.”

But every now and then, an otherwise insipid show will go nuts for an episode and play way about its head.  Unfortunately, you usually have to wade through a lot of crap to stumble on these hidden gems, and who has time for that?  Well, apparently I do, as when I started researching this article I realized that over the years, I’ve ended up watching a lot of of terrible shows.  But hey, my pain is your gain!

Here are a handful of episodes that manage to rise above they shows they were spawned from. 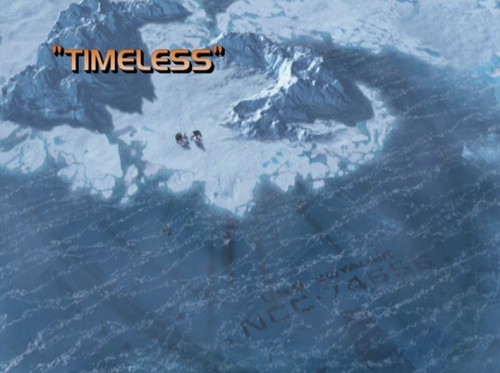 Look, I’m not saying Voyager is a terrible show.  It’s certainly aged terribly, though.  Yikes.  That crash in the beginning of the episode was breathtaking when it first came out, but it’s pretty uninspiring now.

Regardless, it’s not like Voyager was an embarrassment of a show.  It had some great characters, a few strong seasons, and some individually brilliant episodes (like this one.)  It was definitely the weakest Trek, though, and its low points were pretty low, which is made worse by the fact that it was the 4th show, and they should have known better by then.

All that aside, “Timeless” is a sterling example of how you can use classic science fiction tropes to tell a meaningful, moving story.  With Voyager being all about how the crew is going to cross this unimaginably huge distance to get home, an episode gets bonus points for executing the “close, but not quite” trope well.  This one starts in the future, with Voyager crashed and long since buried under the ice, with Harry Kim and Chakotay the only survivors.  The episode centers on their increasingly desperate (and illegal) attempts to travel back in time to stop the accident – which was Harry’s fault in the first place, having fed Voyager the wrong course corrections while testing an experimental super-speedy engine.

What makes this one work so well is how the sci-fi elements – experimental technology, time travel – work to show Harry in this new light.  On the show, he’s always been consummate idealist, somewhat naive, always wanting to see the best in people.  Fifteen years and a tragic mistake later, he’s bitter, jaded, and pragmatic.  Funny how that works out. 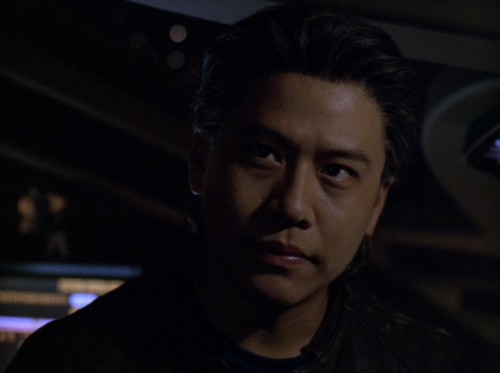 Again because of the sci-fi elements, Kim has the chance to fix his mistake – something that anyone with the guilt of a survivor would probably be obsessed with.  His exultant “Yes!”as he gets it right just before his shuttle blows up is one of the most triumphant moments ever.  And his conversation with himself at the end, via log entry, has a haunting “someone just stepped on my grave” quality. 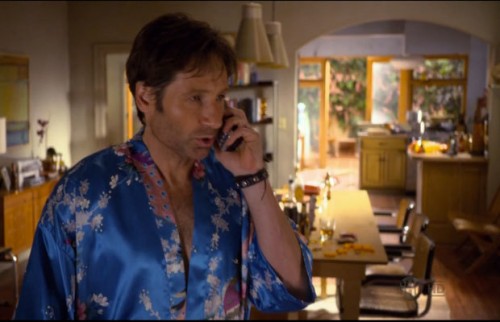 As I mentioned above, this show really only hits the one note, but it does vary how it’s played.  It’s at its worst when Hank Moody is soulful and depressed and the show is trying to be a Serious Drama ™, Hank bemoaning the crumbling relationships with his daughter and her mother even though their state is 100% his fault.  It’s at its best when Hank is whimsical, and the show doesn’t take itself too seriously, or at all.

Take this episode, “The Apartment,” from the latter half of Season 3.  Basically the entire season was building up to this.  Hank’s professor job was a flimsy excuse for him to sleep with his TA, the Dean’s wife, and a student, all at the same time, and the hijinks that ensue when he tries to juggle them.  This episode is the inevitable collapse, where everyone finds out everything, and it could not be funnier.

The episode starts with his student -and former stripper – showing up with her stripper friends to party, and ends with her, the Dean, the Dean’s wife, an actual fire, a Speedo-clad Rick Springfield, his TA, and his daughter all in a hilariously messed up stew.

This episode also includes one of the more incisive lines in the series, spoken offhand by, of all people, his ex-stripper student: “You know, for someone who loves women so much, you sure don’t understand them.”

I made it through a season of Glee (for reasons that shall remain nameless), and as painful as it is at times, it has its moments if you can get past the god-awful music.  Brittany, for instance, pretty much won me over, and some of her lines are laugh-out-loud funny, mostly due to her absolutely deadpan delivery.  It’s not a good show, but if you’re willing to stomach the cotton candy, there’s some interesting bits between the autotuned monstrosities this show calls music.  Like this:

A nuanced critique of how this show handles social issues, and where we’ve moved on to as a culture in the years since this episode aired is kind of beyond the scope of this article.  I’ll just say that when I saw it, it was pretty refreshing to see something like this on TV, regardless of the nuance of the situation. 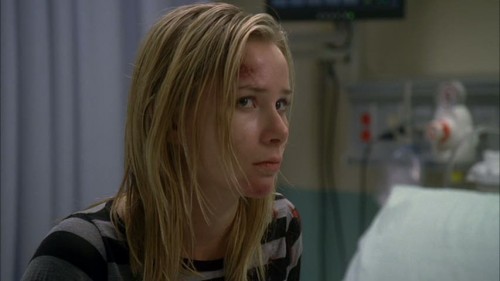 On the surface, there isn’t anything radically different about this episode of House.  It’s just as formulaic as the rest of the show: House insults people, a patient has a strange thing happen to her, then another series of strange things, something random gives House the answer, and between all this House tries to be a better person and fails.

But what this episode is is a distillation of what the show could do when it was on point: connect separate plot pieces, deal with actual themes and have them not be disconnected from each other.  Have House deliver some really good insults.  House’s banter with CIPA patient Hannah (pictured above) is a microcosm of why the show worked as well as it did.  His razzing of Cuddy about her blind date is also just about the perfect example of how their characters work together.

Plus, there’s a pretty cool scene of House pulling a 25-foot long tapeworm out of a girl with no anesthesia because she has CIPA (insensitive to pain).  It’s… totally gross.  But you can’t not look. 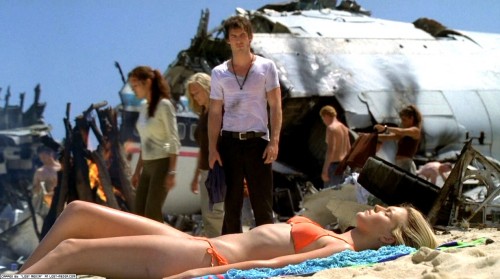 God, remember how good the first episode of Lost was?  It was like a master class on how to build tension, work with it, release it, and then build it again.   The small character moments amid the frantic energy of the crash.  The chaos of the crash.  The subtle, and not-so-subtle clues that not everything is what it seems.

Too bad about the rest of the show.  Instead of the uninspiring title “Pilot,” they should have just called it “It’s All Downhill From Here.”