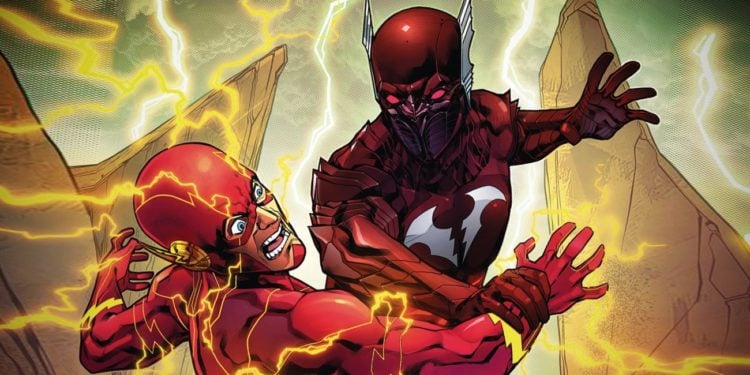 Recently, an episode of The Flash showed a museum from the future of the setting. As a result, it should come as no surprise to learn that the museum was crammed full of cameos. However, one of the most interesting examples was a mention of the Red Death as someone that had been overcome by The Flash, which is a very curious choice with what could be very interesting consequences.

Who Is Red Death?

In short, Red Death is a villainous version of Batman. However, he isn’t limited to Batman’s standard capabilities. Instead, he has Batman’s standard capabilities on top of the Flash’s super-speed, thus making him a formidable threat to a wide range of characters in the comic books. With that said, there is much more to Red Death than that, though explaining the full extent of his potential importance is going to take some doing.

Background-wise, there was once an existence called the Forger in the DC Comics setting, who was responsible for creating new universes based on both the hopes and the fears of living beings. The most stable of these creations would be integrated into the Multiverse. In contrast, the most unstable of these creations would be destroyed by the Forger’s dragon, whose name is Barbatos, thus ensuring that their energy could be used to make more universes. In time, Barbatos developed a taste for destruction, which grew and grew until he was convinced to fall upon the Forger with murderous purpose.

However, more universes are still being churned out. Moreover, since Barbatos can no longer be bothered to perform his intended purpose, the sheer number of unstable creations has resulted in a kind of cosmic shadow called the Dark Multiverse in which universes are doomed to exist for no longer than a short time because of their flawed making. It is from these universes that Barbatos drew his Dark Knights, who were an entire team of villainous Batmans who were to be used in his invasion of the true Multiverse.

In Red Death’s case, he was a Batman who went mad because crime-fighting consumed the lives of each of his side-kicks. As a result, he became convinced that he could make better use of the Flash’s super-speed than the Flash himself, which is why he became the Red Death by absorbing the Flash through the Speed Force before proceeding to kill the supervillains of Gotham City. In time, Red Death became desperate to save his crumbling universe when he learned of its flawed existence, which is how he was recruited by the first of the Dark Knights, who told him that he could do so by participating in the invasion of the Multiverse.

Speaking of which, it is important to note that Red Death doesn’t come on his own but is instead one member of an entire team of villainous Batmans. The first of these Dark Knights was the Batman Who Laughs, a Batman who was pushed to the point of killing the Joker but was hit by the same chemicals responsible for destroying whatever sanity the Joker might have possessed in the first place. As a result, the Batman turned Joker killed his own sidekicks, the Justice League, and then the rest of his own Earth until he learned about the countless possibilities out there by being contacted by Barbatos. Likewise, other Dark Knights ranged from the Merciless, a Batman who had become overwhelmed by putting on the helmet of Ares, to the Murder Machine, a Batman who had been taken over by an over-protective AI meant to perform the functions that Alfred had once been responsible for.

What Does Red Death Mean For The Flash?

At this point in time, it is unclear what the Red Death means for the Flash. However, the fact that he is described as a villain that the Flash had faced means that there is a chance that the character could be showing up on the show at some point in the not too distant future. Furthermore, since the Red Death is pretty much a package deal with the rest of the Dark Knights, there is a non-zero chance that the Arrowverse as a whole could see some kind of crossover with the Dark Multiverse, though it is important to note that this remains no more than speculation at the moment.