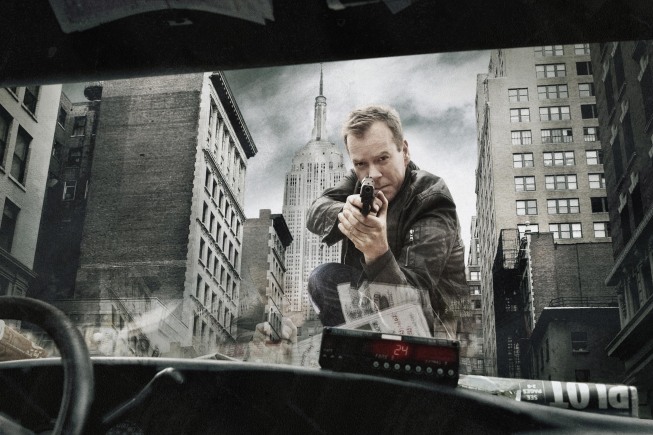 Well, 24 is back with a, uh, vengeance, I suppose. I’m really not sure what other word you could really choose to describe the return of a show where explosions are as common as love triangles on Grey’s Anatomy and dead bodies pile up so fast they’re almost crowding the camera shots during filming.

24 faces the nearly impossible challenge of trying to reinvent itself every single year, and after the first four hours, I’m split as to whether or not season eight is achieving that goal thus far. But before we go into that, we have to set the scene:

President Taylor is still girl-in-chief after sending her daughter to jail for offing a federal prisoner. She’s on the verge of a massive peace deal with President Hassan of Unspecifidistan, although with terms like “UN inspectors” and “Revolutionary Guard” thrown around, it’s almost impossible that this isn’t Iran we’re talking about.

As an added bonus, Hassan is having an affair with a hot blonde American reporter because his wife won’t durka his durka anymore, and his brother, Iranian Jason Schwartzman, does not approve of this, or of his conciliatory approach to peace negotiations with Taylor. 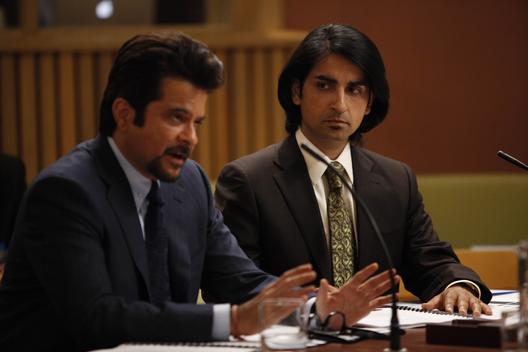 “Why yes, as you can see from my brother and I, a ridiculous haircut is a sign of power in our country.”

Meanwhile, CTU has reopened itself in an underground bunker in New York, and is populated by people you have never seen before, other than Chloe O’Brian who is as awkward as ever and swamped trying to learn the new futuristic data systems in the new facility.

Our new faces here include Hastings, the head of CTU with the only qualification necessary to hold the job, the ability to ignore whatever Jack Bauer says. There’s Cole Ortiz, the young head of field ops who is engaged to Dana Walsh, CTU’s chief data analyst. And there’s some other scrubby tech guy whose name I forget. He’s probably evil.

But what of the man himself? Jack Bauer is embracing his role as grandpa, and is about to head out to California with Kim and family to live a life of peace. But you’ll never believe what happens next! 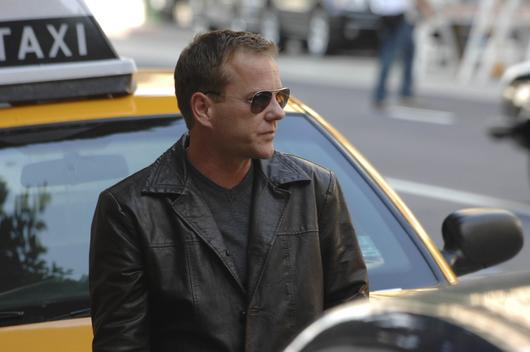 “Why is that guy with a bullet hole in his shoulder running toward me? Oh God, here we go…”

Jack’s plans are altered when an old informant comes banging on his door with information about an assassination attempt against Hassan before he signs the peace deal.

And that’s how we began the four hours. Since then, Jack has temporarily rejoined CTU, stopped the assassination attempt, which has been revealed to be a brainchild of Hassan’s brother and the Russian mob, and the new threat is that the Russians are attempting to sell the brother nukes so Iran Unspecifidistan can be a respected world power. To help with the investigation, CTU brings in last season’s superhot Renee Walker who conveniently has a well-established cover with the Russian mob she’s going to use to unravel the plot. What luck!

So what’s 24 doing right so far in the first four hours? Well, mainly, it’s done a great job of getting rid of all the shit we hate right off the bat.

Hastings has been an obstinate dumbass from the get go, as no one gave him the memo that JACK BAUER IS ALWAYS RIGHT, and he almost lets Hassan get assassinated due to his idiocy. Fortunately, after this happens, he admits his dumbassery and is now giving Jack carte blanche to do whatever he wants.

The whole “will Jack make his flight with Kim?!” plot was growing annoying in the first two episodes as we all knew the answer, but when Kim realized what the hell was going on, she uncharacteristically sat Jack down and told him that if he could save lives, he should stay to help and meet up with them when the crisis was all over. This is a far cry from old Kim who would have thrown a tantrum and disappeared for two seasons. 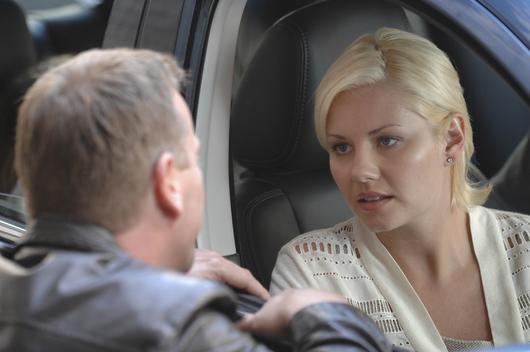 “Look, it’s taken me eight goddamn years, but I finally understand that saving the world is more important than listening to me bitch about how the stylist dyed my hair too blonde.”

We also found out who the mole was right away in the form of Hassan’s brother. Long mole hunts can be exhausting in 24, and the second and triple guessing as to who’s on which side has grown old. That being said, I’m fully expecting another mole within CTU before the season ends, as “one in the White House, one in the agency” seems to be the show’s motto.

Lastly, so far at least, we’re avoiding a ticking time bomb scenario. The assassination plot is over with (for the time being) and now there are just some loose nuclear materials to secure. No risk of anything blowing up. Yet.

So that’s the good, but what are the red flags going up already?

My primary issue is with the lack of solid new characters. I know I’m being a bit quick to judge here, but I hate Hastings, and not just because we’re supposed to hate Hastings. When you’ve lived through Ryan Chappelle and George Mason, this guy just seems like a cartoon, and I don’t think the character is particularly well acted by Mykelti Williamson.

It’s always nice to see Battlestar Galactica’s Katee Sachoff again, but unfortunately she’s plagued with this season’s mandatory useless subplot, as she’s being harassed by an old boyfriend who is threatening to tell everyone at work she’s changed her name and used to be a bad, bad girl. Unless her name used to be Natasha Assassinoff and she was a former Russian mob hitman, I don’t think whatever this turns out to be is going to be relevant to the main plotline. 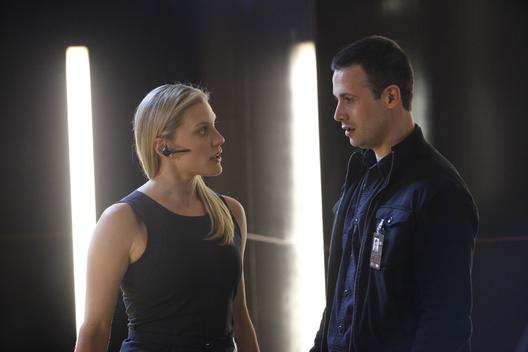 Starbuck! And…aww, who invited him?

And lastly, Freddie Prinze. I really did want to give him the benefit of the doubt here, as I believe typecast actors can shed their previous shackles if given the right material. However, Freddie still has that one damn look on his face that does not go ANYWHERE. It’s a mix between confusion, concern and bewilderment, and I really wish they’d gone with anyone else for the new, brash young recruit role. Sachoff’s pal Lee Adama (Jamie Bamber) would have been a great call if you ask me, and Freddie just seems out of place at CTU and in this show period.

Casting issues aside, I’m mainly worried that 24’s back of tricks is mere crumbs at this point. There are only so many plotlines available to the show it would seem, as we’ve gone through assassinations, nukes, biological and chemical weapons, hijacking, hacking and I think we reached the peak with last year’s commando assault by Africans on the White House. I honestly don’t know what else is left.

It’s also annoying to know that in any given season of 24, you KNOW you’re watching “phase one” of some elaborate six-part plan set to elaborate over the course of 24 hours. I maintain that the show’s mandatory 24-episode length HAS to go, as 12-16 eps would be just fine with me, and would allow the plot some breathing room so it doesn’t force itself to be completely ridiculous just so the pace is kept up through the seemingly endless season.

I’m hopefully for this season, but optimistic, and if I’m being honest, I’m starting to feel a bit like Jack Bauer must be these days, pretty exhausted and wondering if I’m too old for this shit. 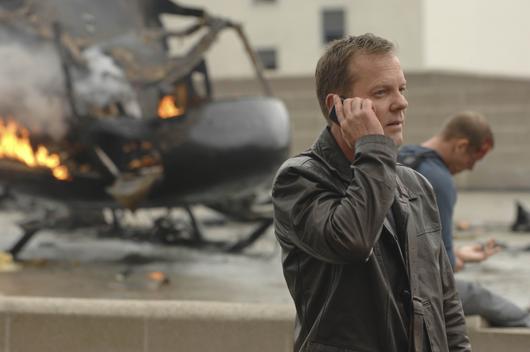 “What do you think happened?” 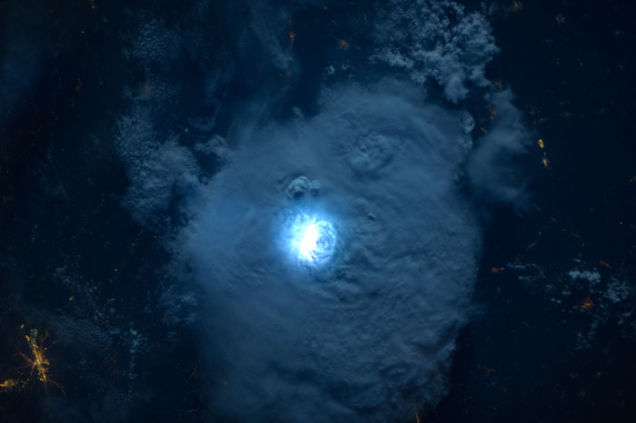