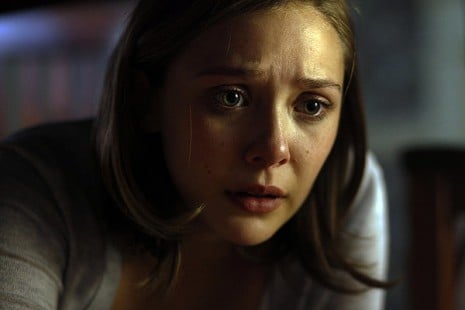 A  movie shot in one take? It’s a feat that sounds too impossible to be true, but it’s the hook that Silent House uses to draw you in. It’s a horror film “presented as one continuous shot” which documents an hour and a half of a young girl’s life on a day where things go horribly awry at her lake house.

The girl is Elizabeth Olson, younger sister of Mary Kate and Ashley, who after this film and Marcy Martha May Marlene this year, is establishing herself as quite the horror icon. Here she’s Sarah, a girl up at her lake house with her father and uncle. Vandals have smashed the windows out, and the entire place remains boarded up as a result. Lanterns and candlelight make for a perfect setting for spookiness.

And spookiness does ensue. Sarah hears noises, then sees an unknown figure moving throughout the house. The keys to unlock all the doors are missing so she can’t leave, and after her father is attacked, she must find a way to get out without alerting the home invader. 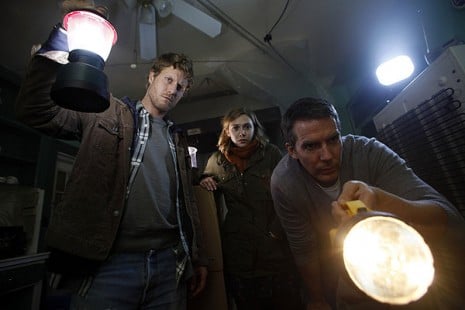 Thank god you have a light the size of the SUN.

The movie doesn’t make it clear whether it’s a slasher film or a ghost story, and you never quite know what’s hunting Sarah until the end. The “continuous shot” gimmick is cool and makes for an effective claustrophobic horror experience, but I bet you if you polled audience members afterward, barely half would even notice that was the case. And is it one shot, really? No. though there are very long takes to be sure, there are clearly places when there’s a door opening, a quick pan, or sudden darkness that could easily let the director say “cut!” It’s a cool idea, but one that’s somewhat falsified.

The film elicits a surprisingly convincing performance from Miss Olson, who is acting with conviction far beyond the quality of the film itself. Yes, most horror films involve a lot of crying and screaming, but with the camera on you at all times, it takes a certain level of commitment and talent to be able to maintain such emotion for a prolonged period of time. I do question the film’s decision to put the rather well endowed Olson in a white tank top for the duration of the film, as it’s not at all “that” type of horror film in the least, and it’s rather hard to be scared during scenes where her ample chest takes up most of the frame. 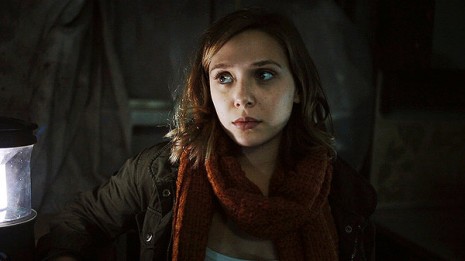 The film is undeniably tense and has a very solid concept as it unravels, revealing a plot that is much, much darker than anticipated. But ultimately, the film is ruined by a painfully stupid twist, one that is SO nonsensical that it makes me believe that there at one point was a very different ending that got completely cut and replaced.

As it turns out, that’s EXACTLY what happened. After the film wowed many at Sundance, for whatever reason, the last fifteen minutes of the film was reshot. Try as I might, I can’t find what the original Sundance ending was, but from the pieces laid out in the film, I believe I know what did, or at least SHOULD have happened in the original.

I’m going to do something I never do, and actually discuss the film’s final twist, as it really has frustrated me to such a degree that it’s worth commenting on. Stop reading now if you wish to see this film, but if you already have, I welcome you into the discussion.

Throughout the entire film, a reveal is being set up. Sarah finds a young girl on her porch that claims she used to play with her as a child. Sarah’s memory is fuzzy, but the girl remarks she used to come over and play dress up, and she’s sure that she has some old photos from that time. Sarah admits she does remember the girl from way back when, but just doesn’t quite remember it clearly. 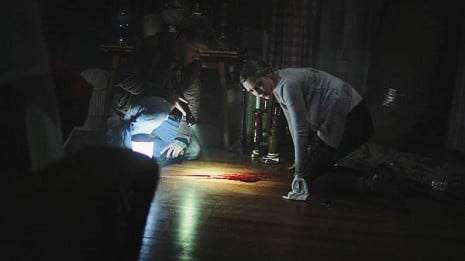 Soon after, the craziness in the house starts, and when Sarah’s uncle and father are still healthy, they each discover photos strewn in areas of the house that they quickly hide from Sarah. Eventually, when she’s by herself, Sarah discovers a secret basement bedroom where clearly someone has been living. Additionally, she keeps hearing and seeing a man walking through the house.

Here’s what I figured out from these clues, and I thought I had it all correct. As a girl, Sarah had her friend come over to play, but her father and uncle would make them play  “dress up” and abuse them. The photos are evidence of that, which is why they’re quickly whisked away. What’s happening now is that the father of the other girl has learned of these past misdeeds. He broke into the house and bashed in the windows, causing the place to become a dark, isolated deathtrap, and has been living in the basement, waiting for them to come repair it. After they do, he reminds them of their misdeeds and systematically hunts them down. Perhaps he’s terrorizing Sarah for not saying anything all these years, but he avoids hurting her, despite obvious opportunities, as she is a victim as well.

All the pieces add up, and it’s a rather satisfying and logical plotline about abuse, revenge and so on. But that’s not what happens. 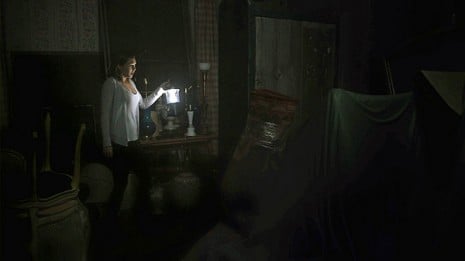 We should probably turn the power off before we have anything at all packed up.

Rather, the film decides to scrap anything resembling logic, and pull an old horror trick out of its ass at the last minute. You discover that the neighbor girl and her large male aide do not exist, and rather they are manifestations of Sarah’s mind as SHE is the true killer, and has been the one hunting down her father and uncle this whole time.

It would be a stupid, cliché plot twist to begin with, but the fact that the whole premise of the movie is that the camera is fixed on Sarah the ENTIRE time, there are literally no available moments where she could have been the one hurting her father, moving his body, tying him up, shooting her uncle or spreading photographs around. Most movies which try to employ this twist will at least have the main character have blackouts or something similar, but here, we’ve seen every second of Sarah’s last hour and a half when all this was supposed to be taking place. This twist ignores ALL the clues set up beforehand, like the vandals and the secret living quarters downstairs, and it’s clear this ending was slapped on at the last second to attempt to shock. Rather, it just mystifies, as it’s unclear how a good concept could be turned to trash so quickly.

It’s so infuriating, that this is the first time I’ve wanted to discuss a twist in a movie at length in a review, as the stupidity was too blatant not to share. What could have been a very effective horror movie ends up being bland and cliché because of this unneeded last minute switch.

The actual movie: 2 out of 5 stars 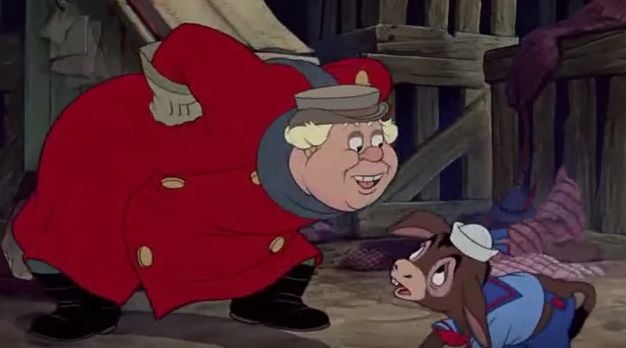