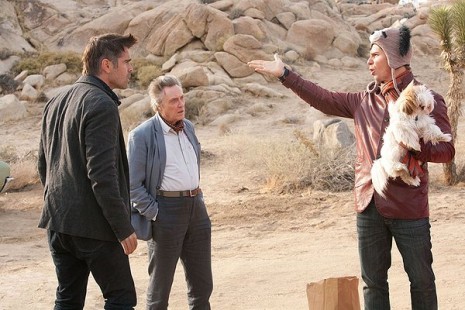 A bunch of colorful characters with probable mental disorders and guns all go around trying to kill each other in the pursuit of sacred object. If you’re Guy Ritchie, it’s a diamond or a painting or a pair of guns. If you’re Seven Psychopaths, it’s a little Shih Tzu named Bonnie.

That’s where the similarities between the two end, however. What could have been an American rip-off of Ritchie’s films (many have tried) ends up being a rather smart, unexpected meta-commentary on the genre. Though starting off slow, the film picks up steam and when it reaches full insanity at the end, only then will you understand its brilliance.

Marty (Colin Farrell) is a man with a problem. Well, two problems. The first being that he’s a borderline alcoholic which causes constant fights with his significant other Kaya (Abbie Cornish). The second is that he’s been tasked with writing a new screenplay for which he has a title and nothing else, Seven Psychopaths. 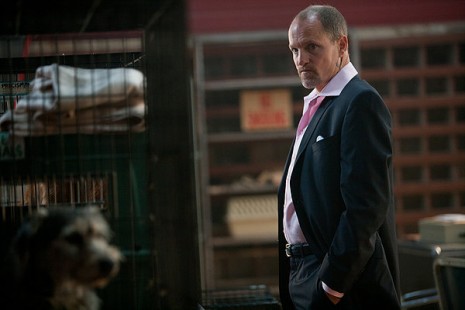 His best friend Billy (Sam Rockwell) wants to help with the script, and in his off-time owns a dognapping business where he and his partner Hans (Christopher Walken) steal dogs, then return them to their owners for a cash reward. Their scheme is complicated one day when they lift the wrong dog from the wrong man. Mafia boss Charlie (Woody Harrelson) loves his Shih Tzu more than anything, and thus begins a murderous rampage in an effort to get her back, and Marty is caught in the middle.

Fortunately for him, it all turns out to be rather great material for his screenplay, and the crazier things get, the more the script begins to take shape. At first, splitting time between his imagined movie of Quaker killers and Viet cong priests is confusing, but as fiction and reality start to merge, it becomes clear what’s really unfolding.

Yes, there’s a great ensemble cast here, but this film is all Sam Rockwell’s. The underappreciated actor shines yet again here, as he has in practically every film he’s been in as of late from Moon to even Iron Man 2. Here, Billy is well-meaning but a bit insane himself, and as the film unfolds, it’s clear this is his story, and Marty is just writing it all down. 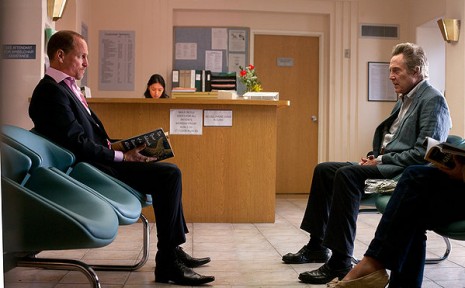 Christopher Walken needs to be in more things. All things, really.

The film becomes more of a meta commentary on itself as time goes on, with Marty being criticized for Hans for a lack of strong female characters and Billy bemoaning the lack of a climactic shootout. And it’s a criticism of the genre as a whole, which has gone overboard with ultraviolence (though here there’s plenty of violence to be found as well). Marty is a pacifist, unknowingly like the imagined initial protagonist of his work, a Buddist psychopath who Billy says doesn’t make any damn sense. It’s interesting to see a non-violent lead in a very violent film like this, particularly when it’s action-star-in-the-making Farrell, but it’s a good switch that allows the other characters to shine with their brutality and insanity.

The first half of the film is weirdly paced, confusingly scripted and a bit more convoluted than it needs to be. But those problems are eventually all rectified as the movie progresses, and it becomes more enjoyable by the minute leading to a very satisfying finale that may be predictable, but is still welcome nonetheless.