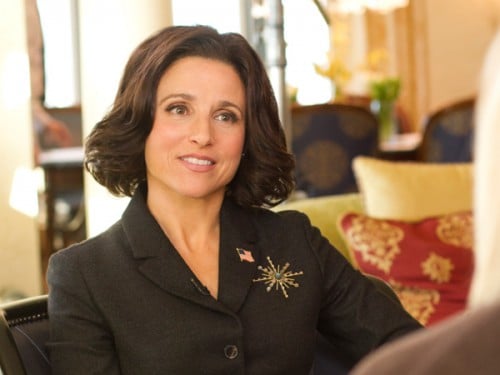 I’ve been attempting to make the most of my HBO subscription, now that I’m a legal watcher of its shows since my apartment complex gets it for free. This means I’m going through HBO Go and pretty much watching everything on the channel I haven’t seen yet.

I do have The Sopranos, The Wire, Deadwood, Band of Brothers, Curb, Entourage, The Newsroom, Flight of the Conchords, Rome, Boardwalk Empire, Girls, Oz and Game of Thrones under my belt, so my options aren’t exactly wide open. But I did decide to plow through a more recent offering of theirs, Veep.

I watched Veep when it premiered last year, and I think I even stuck around for the second week. It didn’t particularly move me comedically, but now that I’ve done with two full seasons in a week, I think it’s a show best consumed in just a few sittings rather than spread out over weeks and years. It’s not like Girls, where a singular episode will get you talking the next day, but as a whole, it’s one of the most unique shows on TV.

A brief overview for the uninitiated: Seinfeld’s Julia Louis-Dreyfus is Vice President Selena Meyer, a former presidential hopeful who had to settle for being on the bottom of a ticket when her primary campaign went south. She’s joined by Mike (Matt Walsh) her clueless director of communications, Amy (Anna Chlumsky) her workaholic chief-of-staff, Dan (Reid Scott) her slimy deputy director and Gary (Tony Hale), her personal aide who more or less treats her how Buster Bluth doted on Lucille in Arrested Development. It may be the same role, but it’s a great one. 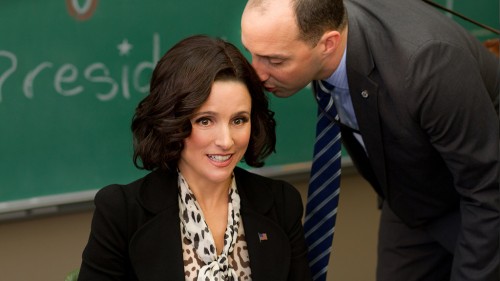 The show’s focus is on Selena trying to grasp at what little power she has as the vice president. It’s an indictment of the relatively useless office, but more so the entire political process in general. Veep is all back-stabbing, name-calling, dirty deals and more name-calling. Seriously, the amount of insults per minute in the show is simply astonishing, and make up most of the best lines in the scripts.

Veep is a unique show because I don’t believe I’ve EVER seen a comedy as soulless. I used that word in my title on purpose, even though it’s normally meant as an insult when used to describe media or art. But here, I mean it literally. There doesn’t seem to be one person on the show with a soul.

Think about every comedy you’ve ever seen. Yes, there are ones that are supposed to be “funny with a heart.” For every time Dwight sets a room on fire in The Office, you have a teary eyed moment between Jim and Pam. Or even on straight-up comedy shows, for every time Jazzy Jeff gets thrown out of the house on Fresh Prince, you have Will’s dad abandoning him. And so on. Really, every single comedy I can think of has SOME sort of dramatic component to it, even if it’s just one millisecond of Larry David genuinely feeling bad about something he’s done on Curb, or E feeling rejected by Vince on Entourage. There’s at least a tiny glimmer of heart in every comedy, at one point or another. 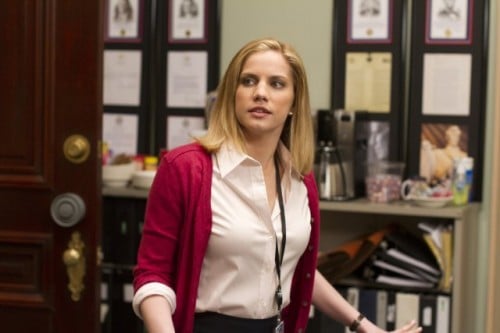 Not in Veep. Not ever.

For example, the show spends an entire episode worrying that Selena’s boyfriend has gotten her pregnant. It turns out he has, and the next episode it’s revealed Selena had a miscarriage. It could be a tender moment for her character, and really, it should be. But what does the show do? Chief of staff Amy pretends that SHE was the one who was pregnant and had the miscarriage and gives a fake interview about it to the press to throw the scent off Selena. High fives abound in the office afterward.

This isn’t a BAD thing, I’m just amazed at the complete depravity of the show. By that I don’t meant that the jokes are necessarily the most offensive or tasteless I’ve seen on TV, it’s just that absolutely no one has pure motivations on the show with nearly everyone afflicted with an unquenchable thirst for power. As such, Veep is content being a constant whirlpool of insults being bandied about the cast with nary a dramatic moment to been seen, or really even hinted at for that matter. 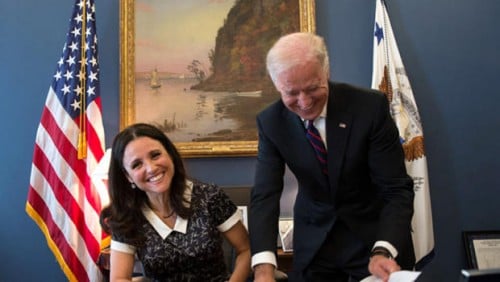 Really though, Veep is a show about politics without being political at all, in sharp contrast to say, the rather preachy Newsroom just down the hall. Political parties are almost never even mentioned. Selena’s own party isn’t named, though there are vague hints its probably Democratic. She is in no way a parody of someone like Sarah Palin, who was almost a recent female vice president, and the president himself is never shown or even heard from. It’s amazing how Veep manages to indict politics as a whole without taking one side or the other. Or really even coming close to it.

This is the bizarro world version of The West Wing. A comedy House of Cards. It occupies a unique space on television, and I highly recommend giving it a few episodes to start eating away at your soul.