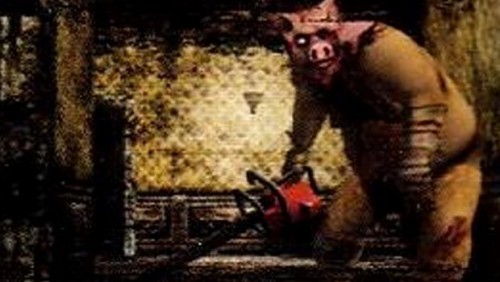 If you had shown me any of the abominations on this list when I was a child and told me they were future video game bosses, I would not have believed you. I would have thought them the massive final creature in some early Peter Jackson shlockfest, or maybe creatures dreamt up by Frank Frazetta, but I would NOT have equated any of them with the medium of video games.

Yet, those undulating masses of naked, oozing breasts, festering boils, and sharp, yellow teeth are very much indicative of the bosses we fight in modern video games. No longer are they just large and physically imposing, now they wear their psycho-sexual issues on their bloodied sleeves, and the end result, when all is said and done, fighting them can be some very unsettling stuff. Here, for your reading pleasure, six video game bosses that are truly repulsive to behold, yet also, truly a joy to maim and dismember. 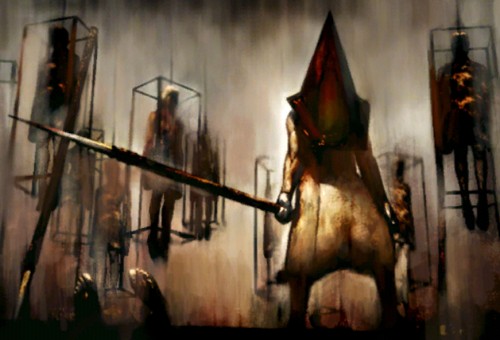 Pyramid Head’s version of the Rubix Cube was far more twisted than our own.

Before I say anything, I just have to point out that most people who are not huge Silent Hill 2 groupies (like me) seem somewhat confused about who (or really, what) Pyramid Head is. He is not what you think. Some tortured guy who governs Silent Hill and has a pyramid on his head to scare people, or anything remotely close to that. No, he is the physical representation of James’ (the “hero” of the second game) psycho-sexual guilt he felt from his wife’s sickness, as well as how he was coping (breaking apart) as a result of murdering her. That is Pyramid Head. You know that weird thought you get in the back if your head that’s way too dark and kinky to share with anyone else because you think they would think you were crazy, even though THEY have probably had the thought at one time, too? Yes. THAT is Pyramid Head. A manifestation of the darkest parts of our underfed subconscious.

So when you first see him “raping” those mannequin legs, you know this guy is going to haunt you, and for the remainder of the game, he does, often showing up and killing the newer version of your wife you created in your head to compensate for the old version you killed. Like I said, it is really heavy stuff, and he is one the real reasons I have never shaken the chills that game left with me after playing it.

Also, a huge f*ck you to the movies, who took everything sacred and interesting about the character, and made him into some lumbering “bad guy”. Though the skin rip was pretty cool. 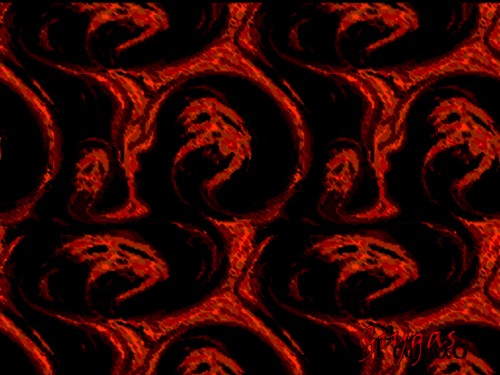 ” No, Mom. Don’t worry! It’s just a cute role playing game to help pass the tiARGHHHHHH KILL IT WITH FIRE!”

Now on the other extreme. A game that, up to the point we meet Gygas, is really NOT that dark. Then suddenly, we are in a looking at some swirling newborn abomination hell bent on devouring our souls and all of mankind. Even the music takes a huge turn at this moment, and I remember as a kid being REALLY twisted by this scene. It does something odd to a young mind. It is like, in a moment, you suddenly can grasp all the suffering in the world that no child should ever have a grasp on. It was very uncharacteristic of old school games, and ESPECIALLY Nintendo games, but Giygas is a boss fight you NEVER forget. NEVER.

And I know I am not the only person in my generation who was f*cked up by this boss fight. I bring it up to people sometimes and can see a flash of genuine terror in their eyes, like a spark. It’s called PTSD, and most of us who played Earthbound and fought Giygas as a child have it now.

The Great and Mighty Poo from Conker’s Bad Fur day 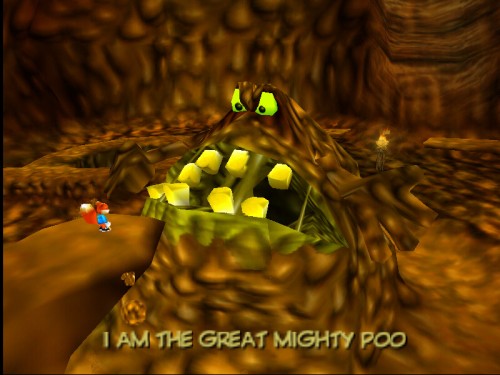 Okay, so this one is WAY more stupid and funny, as oppose to disturbing, but any chance I can talk about a giant piece of shit with corn for teeth that sings opera, I am going for it. Much like Giygas, this is another example of earlier Nintendo having bigger balls than they do now. The Great and Mighty Poo was a perfect example of the juvenile, toilet humor that accentuated Conker’s Bad Fur Day, but at the same time, made us love it. And while we may roll our eyes now, in 2001, this shit was pretty shocking.

I know that was low hanging fruit, so I had to go for it. 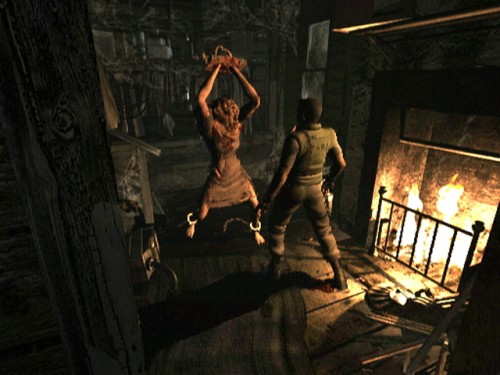 Eerily similar circumstances to how I met my first girlfriend.

Though the Resident Evil series had a great deal of disturbing bosses, I actually think I am going to go for one of the lesser known characters, Lisa Trevor from the remake of the original. Why? One, because if you played through the original game, you didn’t expect her and she was a total shock. The second reason is because just how tragic her story was, and just how scary she was to encounter.

Lisa was just a little girl, trapped at the Spencer mansion with her Mom, both of them forced to endure some brutal testing at the hands of Umbrella. Her mother eventually dies, leaving her alone, and completely mutated from all the experiments they did on her. As you can see in the pic, she has shackles on her hands and feet, and you can often hear them dragging, even before you see her. Also, because it is a Resident Evil game, she has faces of some former victims stapled onto her face. She also can’t be killed outright, so basically, she torments you and makes you shit your pants, all while thinking that, deep down inside that beast, is just a scared little girl. This is the one case on the list where you actually feel kinda bad when you finally kill her, even though you know it is a relief for her as well.

Always gives me flashbacks when I see the suit I wore to my prom.

Okay, I know some people will crucify me for this, but I think Manhunt was one of the best stealth games ever made. I know by the end of the game, the same mechanic, over and over, got a little trite, and I know the A.I was shitty compared to where it is today, but stealth games are all about tension, and having a naked man wearing a severed pig’s head and carrying a chainsaw, squealing and looking for you as you hide in the shadows five feet away from him, is a gaming experience I will never forget.

Pigsy was terrifying in every way. He was the crushed marrow of children’s dreams. He was the creepy old uncle times a thousand. He was that house at the end of the street you were even too afraid to walk past when you were a kid. And while some say Rockstar went too far with this game, why can’t we have profoundly terrifying and disturbing experiences related to gaming, when we are allowed to be terrified and disturbed by other similar mediums, such as movies and literature?

I say we are, and Pigsy helped prove that to me. 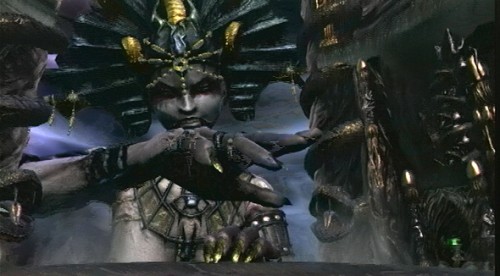 This is the only picture I could find of her without her nipples exposed. Fact.

I know that Dante’s Inferno was just a God of War clone, and was not as good as that series, but in a few of those early levels, they got just right. One of those levels was Lust, and the boss of that level, Cleopatra, had one feature that I found more shocking the most other things I had ever seen in a video game. She was this giant demon who is pretty much naked and, well, keep in mind this following sentence is gonna sound strange to you, and it should, but I want you to know I took it, word for word from,  Wiki, cuz I had no idea how to word this:

Do I even need to say anything else? Game over, man. Game over. And speaking of disturbing….

Anyone who has seen the Despicable Me movies knows that the real stars of the show aren’t any of the characters with celebrity voices. Rather, they’re the minions, the little yellow pill shaped creatures who…

httpv://www.youtube.com/watch?v=pxTtbHmCNiQ Every want to see over 450 crossbow kills set to “Cotton Eye Joe”? Well, you’re about to. That’s the premise for this rather hilarious music video which uses the “thump” of the crossbow impact…

I’ll be honest, I’ve never really had the desire to make my sleek, futuristic-looking PlayStation 4 look like it was actually made in the 1970s out of maple and stained oak, but hey, to each…

I attached a screenshot and a video clip of the beta.  Before I begin, I’d like all of you guys to know that I have a never played a mech-based shooter in my entire life….

(click to enlarge) Ever wonder what the cast of Street Fighter did after they were done beating the hell of each other? “Not particularly” you say? Well shut up, and enjoy this fantastic art series… 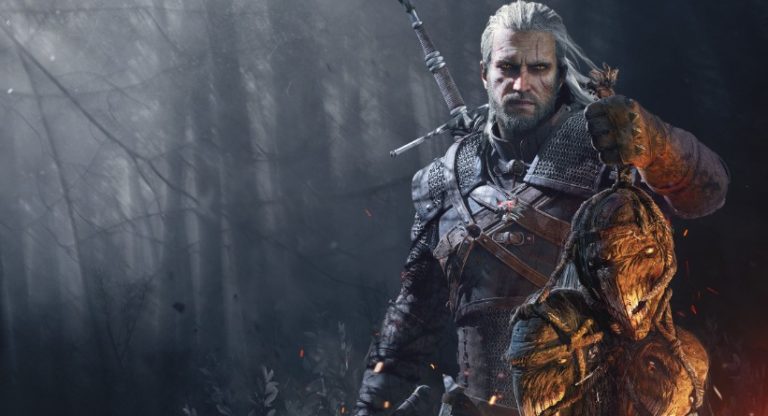 Popular games tend to bring in a lot of people with a lot of creativity, thus resulting in robust modding communities that can turn out some good stuff from time to time. Granted, modding can…