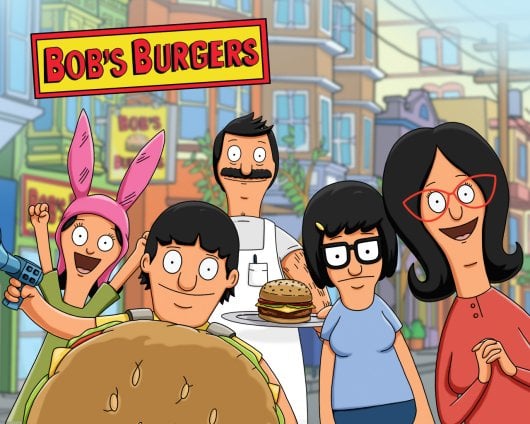 The first time I watched Bob’s Burgers, my girlfriend convinced me to do it. I did NOT understand the appeal; it just seemed like a bunch of fart jokes (not that those can’t be funny….). I thought it was just some show only fringy art kids liked. However, she, being my lady and all, convinced me that there is more to it than toilet humor…..so I gave it another shot. Within watching two episodes I was completely hooked. This show is hilarious, and its’ fans are rabid.

Bob’s follows a family who runs a burger joint, and the plot mostly just follows them, their endless financial struggles (who can’t relate), misadventures and the like. And there is literally a character for everyone! Bob, the father, is completely relatable. He is a perfect mix of hapless, bad dad jokes and responsibility. Unlike Peter [Griffin, Family Guy], who is so stupid it’s a miracle he was able to navigate conceiving children, Bob is a true partner, and embarrassing in the way most dads are, thus making him lovable. His wife, Linda, is not some clueless stay at home mom who just puts up with stupid shit and verbal abuse. They have fantastic dialogue, comedic differences and when they disagree it is funny, but never insulting. As parenting goes, Bob and Linda seem to have an equal share in the work too, which is a relief from the constant “father is away at work so mom is the disciplinarian” scripts we see. Another huge plus, is that Linda has many moments alone with another male character, Teddy, and there is no sexual tension between them. Women and men being just friends?! Who ever heard of such a thing?!

Their children, Tina, Gene and Louise, are absolutely hysterical. Tina is the oldest girl, has quirks that are realistic and not belittling and is boy crazy in a way that somehow makes me reminisce instead of hate her. She is brainy and the voice actor deadpans all of her lines, which I love. Gene is a boy who just wants to fit in with his sisters. He makes lots of comments about being a “woman,” although the writers never imply he is transgender, just a feminist. This is normal within the family dynamic and there is not a “hetero-normative macho” moment in sight on screen. The youngest daughter is maniacal and could be compared to Stewie [Griffin, Family Guy], although she is not cruel. She wreaks havoc and actively seeks to cultivate miscommunications, which leads to great moments of confusion and hilarity. The siblings have many episodes based around them getting into trouble and helping each other out of it.

By far the most uplifting thing about this show is the fact that the family is not mean. They have a mostly healthy dynamic, the women are clever instead of being the butt of every joke (Meg [Griffin, Family Guy]), and for the most part they work well together. Watching Bob’s Burgers is like getting all the humor, but without feeling bad for a character or uncomfortable at some racist/sexist/homophobic under/overtones. Some might say that conflict is necessary to create comedy, but the kind of cruelty and bigotry that happens in a lot of animated shows these days is unacceptable. Somehow the writers for Bob’s have managed to find other things that their on-screen characters have to work through. Imagine that. And, much to my chagrin, there is a delightful amount of toilet humor (don’t tell my girlfriend I said that). Not too gross (aka Stewie farting into Peters diving suit and him vomit sloshing in the helmet). Hopefully Bob’s Burgers is the start of a new era of great comedy!

If you want to catch up, the first three seasons are currently on Netflix.