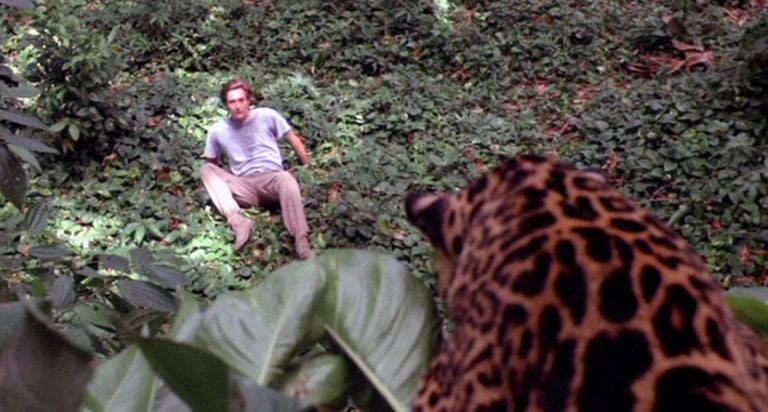 Scary movies and creepy games share something important. It’s not just the power to make us uncomfortable in delightful ways. Rather, they both make us ask, “Am I seeing things?” Restated, in both games and movies, the horror genre is the genre of symbolic hallucinations. There’s a difference between games and movies, though. Movies are one-way transmissions. A game is a back-and-forth between player and developer, moderated by the publisher.

The Unreal Horror of The Serpent and the Rainbow

A few minutes into one of my favorite horror movies, The Serpent and the Rainbow (1988), Bill Pullman’s character consults with a shaman in the Amazonian jungle, drinks a tea with hallucinogenic properties and hallucinates a big cat. The big cat is menacing at first. Then it surprises him with snuggles. The scene ends with a sudden shape-shifting series of frights and lapses in consciousness, setting up a tale of intrigue, sorcery, zombies, and madness. (It’s available on several streaming services. Watch it if you haven’t. Watch it again if you have.)

My Halloween Christmas Wish, The Serpent and the Rainbow: The Game

To this day, no developer has made a game based on The Serpent and the Rainbow. (As Rockstar’s The Warriors proved, though, it’s never too late!)  At first, I thought it might have something to do with the movie’s drug content, gore, adult themes. When The Serpent and the Rainbow was released in 1988, Nintendo dominated console gaming. There was no competition. Nintendo set out to make games for children and did just that. It would be years until R-rated movies like Terminator 2: Judgment Day would find their way to the NES as mostly lackluster licensed properties. In 1989, a year after The Serpent and the Rainbow’s cinematic release, Atlus published a game adaptation of Friday the 13th.

My next avenue of interpretation led to another dead end. Perhaps the technology just wasn’t available to get across the feeling of being uncertain about what is real and what isn’t. Modern retro games like Always Sometimes Monsters show it could have been done. (How well or poorly that game actually accomplishes this goal is a discussion for another time.) Then I thought, perhaps it’s a matter of the complexity of the cultural symbols in the movie? Using NES-quality architecture only, how would a developer get across the Haitian zombie legend, the hallucinations, being buried alive, going mad with suspicions of evil magic being used against you?

And finally, if a game were made and the tea scene were included (the movie would make a lot less sense without it), would it “work?” Is the NES capable of such symbolic nuance? Is Nintendo? Perhaps we should ask Nintendo’s witch doctor from the NES era.

If that commercial doesn’t give you nightmares, nothing will.

At its most involving, horror gaming is a lot like The Serpent and the Rainbow’s shaman-led ayahuasca tea ceremony scene. What do I mean by that? Great horror games make us think feverishly and feel a range of emotions in a very short time. They do this by using jump-scares and symbolic sequences that suggest our character may be hallucinating and there is nothing we can do about it. We’re along for the ride.

A horror game developer is a shaman who uses electronics and code instead of hallucinogenic tea leaves to transform us with targeted, purposeful frights, but the effect is the same. We endure deranged symbolic visions that challenge our sanity and demand we adapt our consciousnesses to play by the new rules. Eternal Darkness: Sanity’s Requiem, Alan Wake, the Silent Hill series, the Amnesia series, Outlast… Think of these games as developer-led fear-discovering rituals. Rituals reassure us that, despite the confusion we sometimes feel, our world has order. Our lives have meaning, et cetera. Like all great rituals, gaming establishes a common symbolic vocabulary. Nurses mean something different after you’ve played the Silent Hill series.

Horror game developers run in the shadows between the shamans and deckers of the Shadowrun reboots. If you’ve played Shadowrun Returns, Dragonfall, or Hong Kong, you know that it’s very hard to be a great decker and a great shaman at the same time. The decker class uses electronic body augmentations to jack in to the Matrix, and augmentations inhibit the spellcasting and combat magic that characterize the shaman class. If you don’t think the Shadowrun reboots have horror elements, you haven’t thought enough about just how creepy a Dead Man’s Switch really is.

I’m not going to write about who deserved to win which awards, nor will I whine about a terrible movie cleaning house at this year’s Oscar ceremonies; I’ve already done plenty of both.  Instead –…

(click to enlarge) Here’s a fun little game that I believe I found on reddit, though who knows where it actually originated. It’s called “pick the fictional items” and it allows you to have TWO…

Yesterday, I posted my official, spoiler-free review of Man of Steel, a film that’s better than its being scored, but not quite on the level of other true superhero classics. I like writing reviews, but…

(click to enlarge) The extent that Bioware seems to want to go with their Mass Effect licensing is a black hoodie or jacket with a red and white stripe and “N7” slapped on the chest….

Before watching it for myself, I simply couldn’t fathom why 2011’s The Muppets was as popular and as well-received a film as it ended up being.  The Muppets were those fuzzy, rainbow-colored puppets from the…

Last week, without much fanfare at all, a game titled Playstation All-Star Battle Royale was announced for the PS3. Once you struggle past the exceptionally longwinded title, the game at its core is Super Smash…