Add How to Train Your Dragon to the list of animated films that are just as enjoyable for adults as they are for children.  In fact, today’s animated films are far less likely to disappoint than live action ones, especially when it comes to DreamWorks or Pixar productions.  I had reasonably high expectations for How to Train Your Dragon, the movie based on the 2003 children’s novel of the same name.  I was not only not disappointed, but I enjoyed the movie’s thoughtful story and dazzling visuals so much that I am considering seeing it again.  Keep reading for the full review; some minor spoilers ahead. 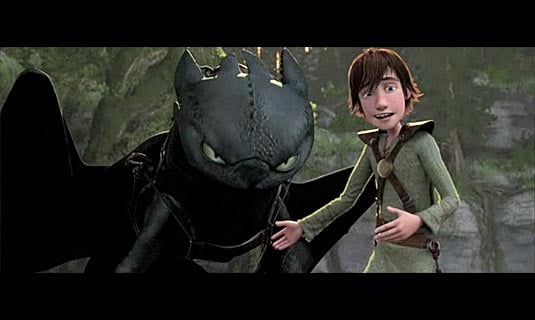 In a land called Berk where Vikings are constantly warring with all sorts of dragons, the frail yet ambitious Hiccup has a hard time fitting in as well as pleasing his father, a massive leader by the name of Stoick the Vast.  Hiccup gets his strange name from the Viking belief that ugly or repugnant names will ward off trolls and other forms of evil, and How to Train Your Dragon is littered with many of these types of Viking/Norse customs and beliefs.  Certainly, it helps add to the movie’s charm in addition to fleshing out the world of Berk and its inhabitants.  Anyhow, try as he might, Hiccup proves to be only a nuisance and a hazard in the Vikings’ battle with the dragons and, as such, he is prohibited from so much as stepping outside during dragon raids.

Speaking of dragons, the different species featured in the movie are diverse and imaginative.  There’s no traditional dragon per se, but colorful, parrot-like dragons, fat bumblebee-like dragons, and even a two-headed species of dragon, with one head that breathes flammable gas and another head that sparks and ignites it.  If you’ve ever sketched different types of dragons on your notebook while in middle school, you’re sure to be impressed with the types brought to life in the film.

The most feared dragon in all of Berk, however, is one that no one’s ever seen and lived to tell about – the Night Fury.  The Night Fury flies at night, nearly impossible to see in the dark sky above, and its breath weapon (D & D reference, sorry) never misses, more reminiscent of a missile fired from an F-16 jet than a fireball emitted from a flying reptile.  Needless to say, the normally courageous Vikings are mortified of the Night Fury.

One night, when dozens of dragons are raiding Berk for its sheep, Hiccup decides that the only way to win his father over is to kill a Night Fury.  With a lot of luck, Hiccup manages to shoot the Night Fury down from the sky – using a sort of cannon that fires steel balls connected by rope – and finds him in a small canyon deep in the forest the next day.  The jet black beast is immobilized, but Hiccup can’t bring himself to slay it.  Instead, he lets the dragon go.  After roaring in Hiccup’s face, the dragon does its best to fly away, but it’s clear that the animal is injured and unable to fly normally.

Taught by Gobbler the Belch in dragon fighting classes, Hiccup and his peers are told that dragons always go for the kill.  Knowing that this piece of information is demonstrably false, Hiccup returns to the small canyon to find the Night Fury again and learn more about the creature.  While Hiccup’s peers learn from Gobbler, Hiccup receives hands-on training on his own with the Night Fury.  It turns out, of course, that dragons are horribly misunderstood beasts, and Hiccup is saddened by the continuous attacks on dragons by his Viking brethren.  Hiccup and Night Fury form an incredibly strong bond that must be kept secret from the rest of the dragon-hating Vikings.  The two are linked by something more than mere convenience, too, which can be chalked up to thoughtful writing. 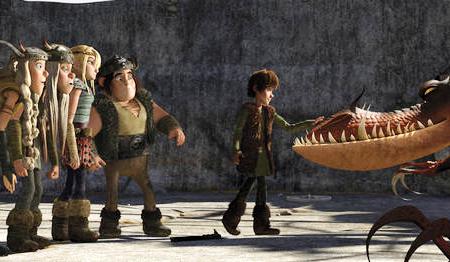 The Night Fury – who Hiccup names “Toothless” due to its retractable teeth – is an impressive animal.  The zoology major in me loved the creature’s design, as it’s clear that the biological rule of “structure fits function” was followed; Toothless is aerodynamic for speedy flight, jet black so as to blend in with the night sky, and has gigantic eyes like an owl for spotting prey from far away and during night.  Even better, Toothless and the rest of the dragons don’t talk.  Instead, they’re portrayed as wild but intelligent animals, and the fear and misunderstanding of the species as a whole reminded me quite a bit of the way the public perceives sharks.

Visually, the movie is stunning.  The texture of the Vikings’ hair and coats is almost impossible to distinguish from real hair or fur, and the dragons – even the cartoony-looking ones – move like real animals.  You can get a real appreciation of all the textures in the film, from face stubble to scales to the ocean, but the most memorable scenes are, without a doubt, those in which Hiccup flies on the back of Toothless.  I saw this movie in 3-D and while it was no Avatar (what is?), it certainly wasn’t gimmicky and added to the overall experience.

How to Train Your Dragon could have maybe used a little bit more humor, but that’s only because it is essentially a kids/family movie.  Nevertheless, the action scenes are intense, the main characters are incredibly likable, and the bond formed between Hiccup and Toothless is one that anyone with a dog can appreciate.

4.5 out of 5 stars Of all the genre films out there, alien invasion seems to be a concept that’s almost been done to death at this point in time. We’ve seen extra terrestrials of…

Wow what a week! All I can say is that the internet was a buzz with Guardians of the Galaxy and rightfully so. I’m still contemplating whether or not I want to go see it…

httpv://www.youtube.com/watch?v=Up4xkeNbYbA As most of you guys know by now, I’m a huge fan of Rocky.   And while my pick for which Rocky movie is the best one changes on a monthly basis, by far one…

(click to enlarge) In addition to being accurate to the point of being scary, I think that this cast could actually be assembled when the inevitable Half-Life movie does get made. It’s about damn time…

(click to enlarge) Well damn. That’s all I can say about these truly fantastic Avenger reinterpretations from The Durrrrian. He’s taken Earth’s mightiest heroes and sent them back in time a few thousand years. A…

An Unreality guest post by Thomas Fink. Why I picked it: I just read the first two Hunger Games books and was hooked, despite them being a young adult-type series. I believe, like Thomas, that…