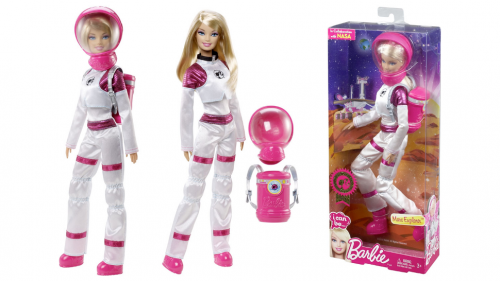 As a way to commemorate the first anniversary of NASA’s Curiosity rover landing in Mars, Mattel will roll out a version of Barbie in a spacesuit. Hearing about this reminded me of the days when a Barbie was always on top of my Christmas list. Of course, I eventually grew out of it and started to play with other things. However, I think that young girls in general aren’t too fond with it anymore. I don’t see any of my nieces playing with a Barbie. In fact, I don’t think that they even own one anymore. Most kids are stuck on their smartphones and tablets.

This isn’t the first time I’m seeing Barbie jump into a trend or don a new look. Do you think this is a cool way for Mattel’s Barbie to stay relevant? Or has technology swept them away?

“We’re going to explore the outside world someday, right? Far beyond these walls, there’s flaming water, land made of ice, and fields of sand spread wide. It’s the world my parents wanted to go to.”…

A father and son team from China have been using scrap metal to build sculptures of Transformers and they’ve been very successful. They’re currently making over $160,000 a year from these replicas this team is…

I’ve got one movie title and that’s where I knew I’d always like this guy:  Secret of My Success.   He played Michael J. Fox’s fun sidekick mailroom guy.  His name in real life?  John Pankow.   …

I was trying to place Jim Broadbent in my head and honestly had a tough time doing it.  Then I realized that the guy is in the Harry Potter movies as professor Horace Slughorn.   However…

Remember when the first Nintendo system came out?  Hell I can remember playing Gyromite!  Think about how much that system has evolved over the years.  Well let’s go back to around the same time shall…

It is no secret to most people who know me that I can sometimes be a horrible human being. Maybe it’s for the sake of writing or comedy, or maybe it’s just to push my…