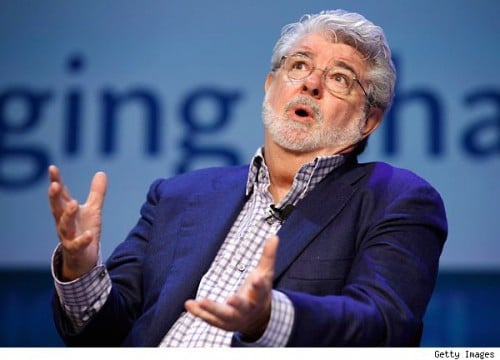 It would appear that George Lucas is a man never content with doing wrong.

Yeah, sure, I’ve heard him say hundreds of times that he’s only interested in telling the stories he wants to tell within the Star Wars Universe, and I’ve always supported him in that regard. After all, he created it. Why not monopolize it all he can? As if the lucrative franchising rights weren’t enough, he went ahead and created the Prequel Trilogy – a series of stories he’d always promised fans that he’d tell, and, having been there since the beginning, I can assure you that he’s always contended that the Prequel Trilogy was never going to be a carbon copy of what he accomplished with the Original Trilogy. It was always going to be necessarily darker. It was always going to be necessarily more political in nature.

Did that mean it was always going to be so woodenly acted?

And, like so many of you, I was never all that thrilled with the Prequel Trilogy. Granted, I never hated it as much as most, but I cut George some slack. It was his swimming pool, and, if he wanted JarJar to pee in it, then so be it. Who was I to say I could do any better?

Still, the bright spot was always The Clone Wars.

Both versions, in fact, though, as of late, I’ve grown much fonder of the current version, though I’d welcome a continuation of the older one.

Watching these (CGI) animated adventures centering on Anakin, Obi-Wan, and the ever-impetuous Ahsoka Tano – all of them marching into conflict against Count Dooku and the rising Sith threat – was a delight. Sure, there were some arcs that weren’t as interesting. Of course, there were some characters that could’ve used a bit more fleshing out on the drawing boards. All right, already, we even had to endure a few episodes with the aforementioned blight known only as JarJar Binks.

There was always ‘the new hope’ that these fledgling years of an ObiWan and an Anakin finding themselves – building these two singular Knights into the Jedis they were destined to be – would remain center stage, and, for the most part, they did. Others joined in their tales, including Yoda, Mace Windu, and Plo Koon. Heck, even Padme was given more to do than stand around in some bizarre evening gowns lookin’ good (or just bizarre) for all of the fanboys. R2 got some quality screen time. A young Tarkin even turned up for good measure!

And to all of the naysayers who wondered why it was that Anakin Skywalker never mentioned his padawan Ahsoka in Episode 3: Rise of the Sith?  Well, it looked like the writers were heading quickly in that direction in the season 5 finale, at least trying to engineer some logical reason why the girl’s name couldn’t and wouldn’t have been spoken amongst the Jedi Order. It may’ve not been a perfect answer, but it looked like it was an answer being given, and that’s nothing to scoff at.

Which brings us to the sad day of March 11. 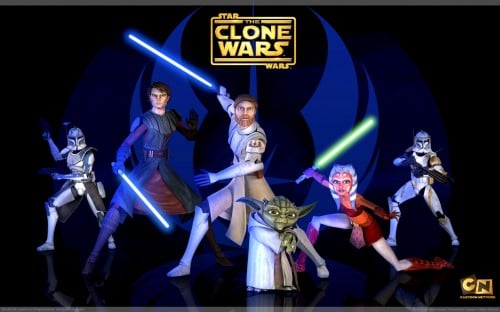 It would seem that the Empire struck back as Lucasfilm announced what essentially is an even darker command than Order 66: the cancellation of Star Wars: The Clone Wars after only five fun-filled seasons.

“After five highly successful and critically acclaimed seasons of Star Wars: The Clone Wars, we feel the time has come to wind down the series. While the studio is no longer producing new episodes for Cartoon Network, we’re continuing production on new Clone Wars story arcs that promise to be some of the most thrilling adventures ever seen. Stay tuned for more information on where fans can soon find this bonus content.”

Damn you, Lucasfilm and Disney.  And damn you, George Lucas.

It wasn’t enough to rob some of their first childhood.  Now you’re taking our second?

Yes, I knew going into it that Lucas and showrunner Dave Filoni had agreed to 100 episodes. When it was clear they were going a bit beyond it, those of us following the scoops of TV land read that a sixth season was definitely in the offing, but that sale of Lucasfilm to Disney threw that welcome news into conflict with what we were hearing elsewhere.

March 11, our darkest fears were realized.

Because some of the remaining stories for a sixth season have already been produced, Lucasfilm was quick to put out a video blurb from Filoni himself, clarifying that there were yet stories that would be told within the Clone Wars universe. Despite the shuttering of the doors, it looks like The Clone Wars will survive in some other capacity, be it direct-to-DVD releases, possible telefilms, or maybe even some limited-run theatrical releases.

At this point, only Palpatine himself knows.