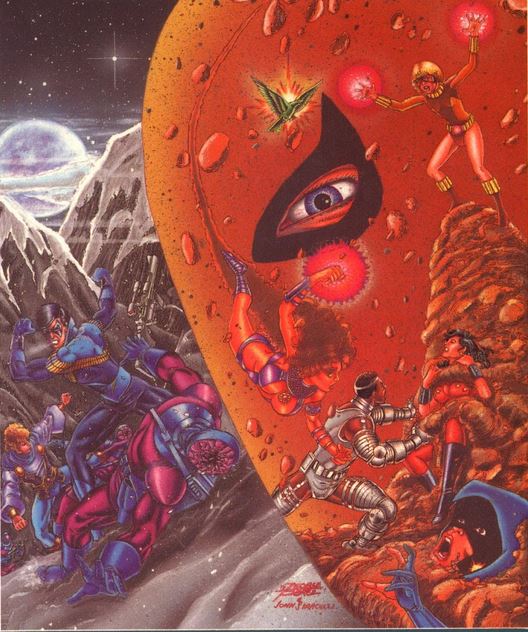 Welcome to the belated part two of my series chronicling some of the most memorable comic book storylines. Like I said before, out of the countless tales spread across the medium over decades past some arcs remain memorable and classic reads. Such a story can attain this status because it represents an important milestone for the art form, a defining moment for a classic character, or just be so awesome that nothing else ever lives up to it.

Last time I delved into a defining moment in the life of my favorite comic character, Deadpool. This time I’m going for historical significance and taking you back to DC Comics circa 1984 and the then-New Teen Titans and their wave-making arc The Judas Contract. The primary events took place in Tales of the Teen Titans #42-44 and the 1984 Annual, although as with most key arcs, the groundwork had been laid throughout the run. There will be spoilers, although I’d say the statute of limitations has expired after 30 years and much of this will be common knowledge to veteran comic geeks whether they’ve read the story or not.

The Teen Titans started with the creatively bankrupt idea of having all of the annoying kid sidekicks of the DC superheroes join forces. Robin! Kid Flash! Wonder Girl! Speedy! Aqualad! Like the Justice League but inferior in every possible way! All of that meh in one book! But in the 80’s the concept was relaunched with a slew of original characters augmenting the sidekicks and a more mature worldview and the Titans we know and love were born. 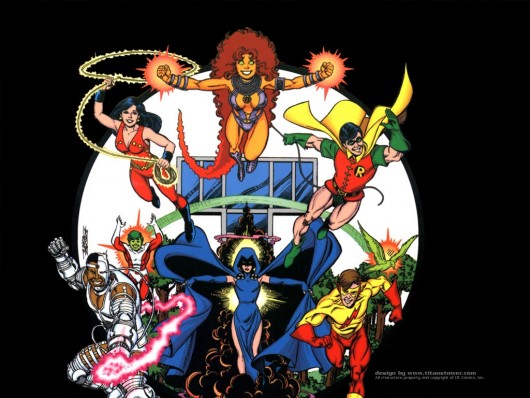 The Judas Contract was the culmination of writer Marv Wolfman and artist George Perez’s new paradigm, and it made the series legendary. In fact, it’s still being adapted today with yet more plans to bring it to the masses coming down the pipeline. But more on that later. The New Teen Titans was the birth of the phenomenally badass mercenary villain Deathstroke (originally known as the Terminator, then Deathstroke the Terminator, then plain old Deathstroke…he was like the John Mellencamp of comic villains), and he’s the driving force behind this storyline.

Judas Contract would be historically significant for the fact that it contains his tragic Vietnam-based origin story if nothing else. Then there are the debuts of Nightwing and Titans mainstay Jericho, but this story is best known for one of the most infamous heel turns in comic book history.

At the start of the arc, Dick Grayson and Wally West have retired from active Titans duty, with the former Batman sidekick having hung up his Robin cape for good in the midst of a crisis of self-discovery and Kid Flash facing a mysterious power outage. The remaining Titans are a mess too. Donna Troy is now the senior member and leader, but she’s having confidence issues, partially due to the fact that Starfire routinely kicks her ass in sparring. Star herself is angsty over her fiancé (Robin) leaving the team. Cyborg is getting all existential and worrying that he is nothing more than his mechanical parts while Raven is withdrawn and suffering from some power issues if her own. 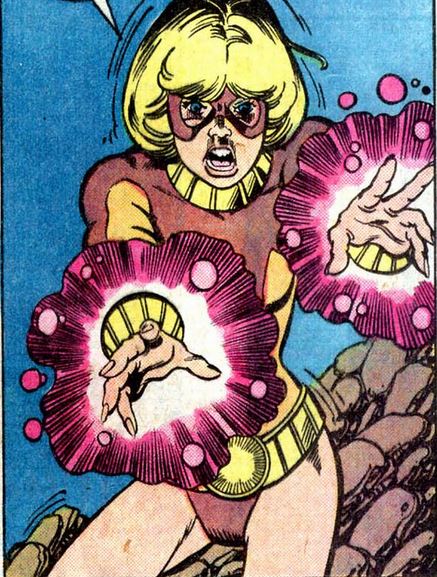 But hey, at least they have their new recruit, Tara Markov, code name: Terra.Her earth-based abilities are crazy powerful, Changeling (known as Beast Boy these days) is super into her although she’s a jerk, and nobody is punching her in the face in spite of her extremely punchable beaver face. The only problem is that she’s meeting with Deathstroke/Slade Wilson (or “Termy” if you’re nasty) to deliver unto their greatest foe the Titans secrets while receiving training from one of the best tacticians in the DC Universe. Also, they are apparently banging. Ew. Surely she’s some kind of double agent, though. No way does an accepted member of a superhero team ever really go bad. Surely.

Turns out yeah, Terra really is evil. And crazy. Deathstroke actually has nothing against the Titans, he’s only honor-bound to fulfill his deceased son’s standing contract with Brother Blood’s H.I.V.E. cult and take them out. But even for him, that’s a tall order. Teens or no, the Titans are swinging some serious firepower on their team. Slade could take any one of them out with his tactical and physical prowess, but all together? Not likely. If only someone could tell him their secret identities. Oh, right.

The team goes down one by one and is delivered to the H.I.V.E., the former team leader comes back donning his new black and blue duds to save the day, and he’s brought back-up in the form of Slade’s other son (the aforementioned Jericho), a metahumans who can possess other peoples’ bodies. Terra faces her reckoning and descends into madness faster than a thousand Anakin Skywalkers when Jericho possesses his father and uses him to go after her. Believing she’s been betrayed by the person she betrayed her friends for, she goes all Bride of Frankenstein (“We belong dead!”) and brings down an avalanche of death, killing only herself in the tantrum. Case closed. 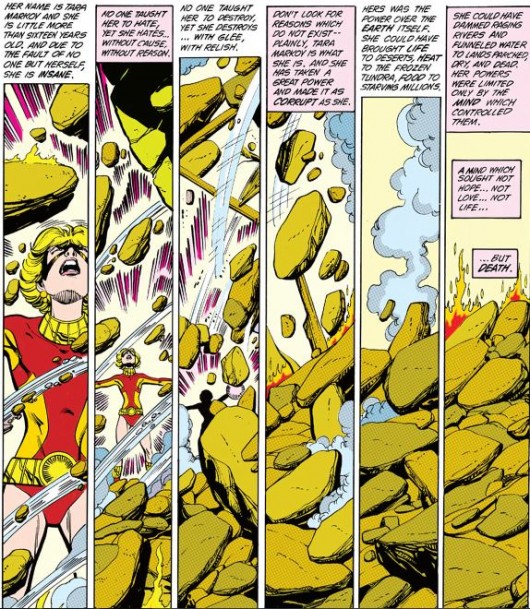 That’s a pretty long-winded way to say “she cray”.

The Judas Contract is typically listed as the definitive Teen Titans arc, featuring a ton of content and character development. But what people really got hung up on was the audacity of Terra’s betrayal. This was the 1980’s, heroes were heroes and villains were villains. Even though Wolfman deliberately softened the blow by disclosing Terra’s allegiance beforehand, readers apparently didn’t buy it and when the extent of her betrayal revealed, they didn’t react well. Nerds didn’t just start threatening other people with death over petty bullshit when the internet became a thing, you know. It’s tradition.

The only genuine adaptation of the story came, naturally, in the 2003 animated Teen Titans series. It was a loose adaptation to say the least, but in a lot of ways it was superior to the source material, which is not something I say very often. In the show, Terra was much more likable and rather than being genuinely evil and psychotic. She was troubled, but wanted to do right by her new friends and even reciprocated Beast Boy’s romantic advances whereas her comic counterpart was just generally unpleasant. If they had made Slade more like his comic equivalent, it would have been just about perfect.

In the show, her betrayal was more a result of Slade’s manipulation and coercion than anything else. It’s definitely the best story from the show and marked a distinct change in tone from humorous kid-friendly fare towards more emotionally engaging and dark themes. Terra showed up again in the all-comedy-all-the-time cartoon Teen Titans Go!, first in a quickie version of the story that satirizes the gullibility of Beast Boy/Changeling and the rest of the non-Raven Titans and then again in a Valentine’s Day episode where Raven is keeping her prisoner in a dimension she uses as a garbage dump. Screw you, Terra. [evil laugh]

DC announced plans years ago to make a full-length animated film based on The Judas Contract, but has since canceled it due to a perceived “lack of interest” which I would translate as meaning “not Superman or Batman-related”. Screw you too, DC. But I’d expect that to change since there is a live action Teen Titans show being developed for TNT and releasing an animated movie alongside it might not be a bad idea.

Any way you look at it, The Judas Contract is a definitive product of its era. The dialogue comes off a tad corny at times in its attempts to be hip 80’s style and some of the character art is a bit ugly, but there is plenty of quality humor and some themes that were well ahead of their time back in the 80’s and still ring true today. The Titans keep coming back in different forms again and again, and every time they do, you can expect them to bring a new version of their greatest story with them. Tara Markov is a rare character that DC had the sense to leave dead. Mostly. They played some space-time games with her in 2001 and she put in an appearance in Blackest Night along with other deceased characters, but in old standard DC Universe continuity, she stayed dead and that in itself is something to celebrate. 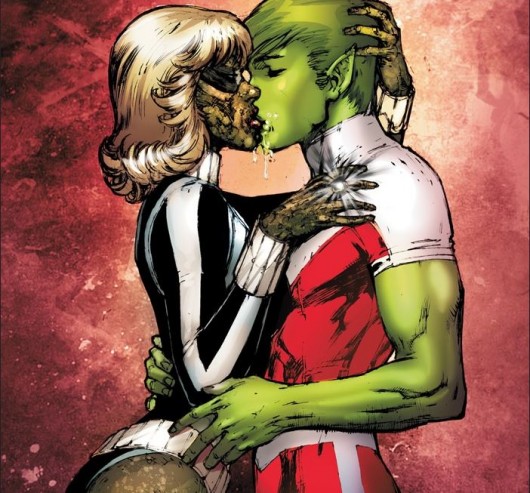 With so many villains in comics making the jump to the light side, it would be refreshing even today to have a group of heroes completely suckered into trusting a viper in their midst with no apologies made. They introduced a new Titan, made her evil, and had her betray her teammates in the nastiest possible way with no remorse. That’s bold writing in any era and that’s why Terra’s betrayal is going to remain a comic benchmark for as long as people are enjoying sequential art narratives.