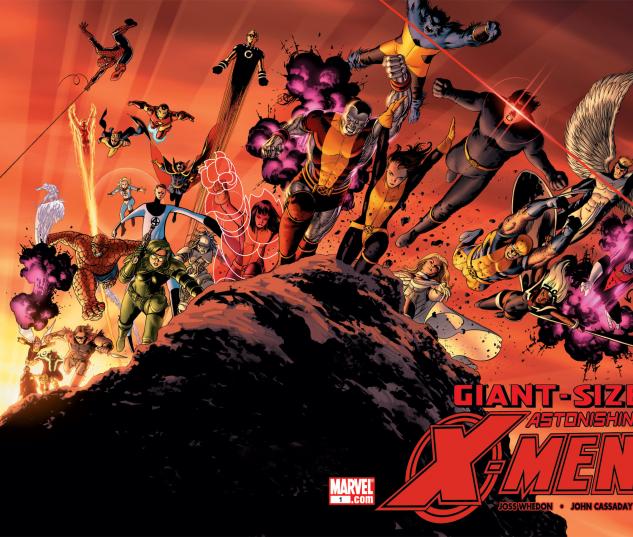 The history of modern comics has been an interesting one for sure, and it’s only getting better. So far during my ongoing limited-edition miniseries about unforgettable and influential stories from comicdom’s past I’ve focused on past decades, but the medium continues to grow and evolve and comic history is still being made today. So for my last two entries are going to focus on more recent events that will likely be looked upon fondly by the connoisseurs of sequential art narrative for decades to come.

A great moment in comic history is made up of storytelling landmarks of resounding significance, definitive moments for classic characters, or of sheer artistic quality. This week, I’m going back a mere 6 years to Giant Size Astonishing X-Men #1, which served as the grand finale for Joss Whedon’s brillliant run writing Marvel’s premiere mutant superteam. If nothing else, John Cassaday’s artwork assured its place in the hearts of comic fans, and the story also debuted Marvel’s SWORD organization (Sentient World Observation and Response Department – kind of like an intergalactic SHIELD) but the reason I’m choosing this issue in particular is to highlight one of the most underrated characters in Marvel’s stable. Because what Whedon’s Astonishing X-Men did more than any of the other awesome things it did was show that Katherine “Kitty” Pryde is the coolest member of Marvel’s coolest team. There will be spoilers, as always. 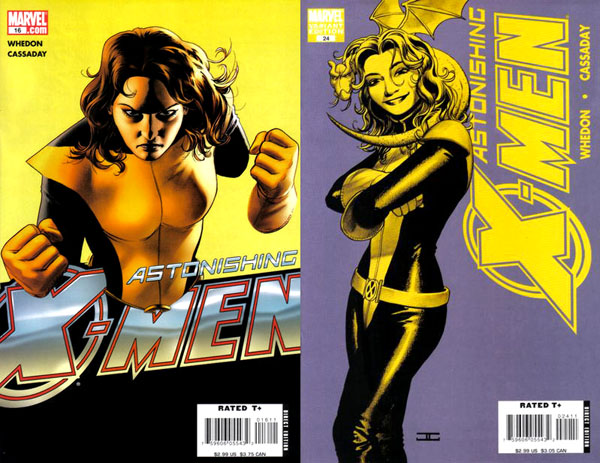 As with most any good comic story, the groundwork for the big splash was laid out well in advance. Absolutely anybody looking for a great comic series to test Marvel’s waters would do well to start with Astonishing X-Men: Gifted and carry on all the way through the 25 issues ending with the Unstoppable arc, which we’ll be dealing with today. Knowledge of the X-Men definitely helps one appreciate the story more for sure, but the run is pretty much designed to welcome relative newcomers as well. It’s hard to do that since the X-Men represent possibly the most convoluted mess in all comicdom, but I’d say this pulls it off as much as could be expected.

Writing the X-Men was a dream job for Joss Whedon, who (before The Avengers) was best known for creating Buffy the Vampire Slayer. Seeing that he’s on record as saying Kitty Pryde was a primary influence for that character, it was no surprise that she ended up on his 2004 rebranding of the team after a long absence. The storyline picks up after Grant Morrison’s New X-Men run that saw former Hellfire Club White Queen Emma Frost join her former enemies and the mutant island of Genosha completely destroyed, among other things. The run started small and slowly built up to cosmic world-ending proportions before the big finale which put the fate of Earth entirely in the hands of arguably the X-Men’s weakest member from a power perspective.

Kitty’s abilities are limited to phasing through solid objects, and she can only do that for as long as she can hold her breath. The misconception here is that she’s just a girl who can walk through walls, and with a lesser character that might have been true. But Wolverine used to be just a dude with claws too. She went through a lot of phases and codenames before settling on plain old Kitty Pryde, has been the new girl, been dragon punched by Deadpool for laughs while playing as Wolvie’s sidekick, had her role in the classic 90’s cartoon handed to Jubilee, was recently wasted in the film adaptation of Days of Future Past in spite of Ellen Page being perfect for the role, and has just too often been discounted as a character.

….aaaaand now you’ve pretty much seen her entire role in the last film. Even Ratner did better by her.

The theme of Whedon’s run was ultimately Kitty becoming a true independent badass of a woman by resolving her outstanding issues on the team, including her romance with Colossus and bitter past with Frost. Becoming intangible may seem like a novelty when you’re amongst titans who can control the weather, level buildings with eyebeams or your fists, enter minds from across the globe, or whatever, but Kitty shows that it’s not about the size of your powers, it’s how you use them. Her resilience and intelligence made her a force to be reckoned with when the Hellfire Club took out the rest of her team in their own mansion and it was up to her to rescue them alone. And when all of the world’s greatest heroes combined were rendered useless against an unstoppable world-destroying threat, it was left to Kitty to stop the Earth from destruction.

The grand finale had the X-Men on a planet called Breakworld, which was planning on destroying Earth by firing a massive bullet called the Retaliator through space because of a prophecy where Colossus is destined to destroy their planet. Oblivion loves company, I guess. Unable to stop the launch of the world-shattering projectile from outside, Kitty Pryde phased herself inside of it before it launched and found herself trapped hurtling towards the destruction of her home planet, leaving her team facing a genocidal madman bent on using Colossus to destroy his own planet.

Meanwhile, back on Earth the other X-Men, Avengers, Fantastic Four, and Earth’s other heavy hitters are made aware of the threat and gather themselves to save the planet, but they are stopped by a signal being sent out from the missile that targets their minds and leaves them stuck in their own world-saving fantasies, unable to act in real life. The Sentinel that destroyed Genosha –which has since become sentient and is experiencing great regret at its past actions- attempts to make amends by placing itself in the path of the bullet, but nothing can stop it.

Kitty’s exhausted, and the unique properties of the intergalactic projectile seem to have fused to her when she phased through its mass. She feels like she’s got nothing left. She shares a touching personal moment with her former enemy Emma Frost via telepathic link and says a little prayer just before the bullet hits New York City….. 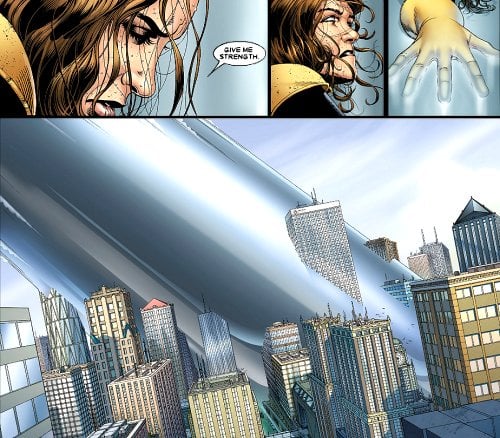 ….and goes straight through it without leaving a dent as she phases the whole goddamn thing through the entire planet. That’s what you call a show-stopping moment.

The tragedy is that with her sacrifice, Kitty is lost to the X-Men, still hurtling through space to god knows where, but that’s a hell of a way to go out. On the plus side, the X-Men saved two world from obliteration, Logan has a new protégé in Armor, and Beast is invited to join Lockheed and Agent Brand in SWORD (who would get their own spin-off), and Scott and Emma are still happy together after a major test. After the long, hard, crazy road Astonishing X-Men wound through, it was a fantastic and memorable way for Whedon and Cassaday to ruin the comic for the poor suckers who had to take over the title by being too freakin’ good an act to follow.

The initial run of this series was an instant classic recalling the glory days of Dark Phoenix Sagas and other stories that have stood the test of time. It was technically four arcs with great stories and character journeys and moments for the entire cast, but at the end of the day it’s paced as one story about Kitty Pryde evolving from the X-Men’s kid sister to a true heroine of epic proportions in her own right. And rarely does a superhero comic so truly live up to the adjective in its title.

It’s a fond wish of mine to see the whole thing on the big screen someday. If only there was a major film writer/director who was a proven hitmaker and had experience making blockbusters about Marvel superhero teams who could do this title justice… 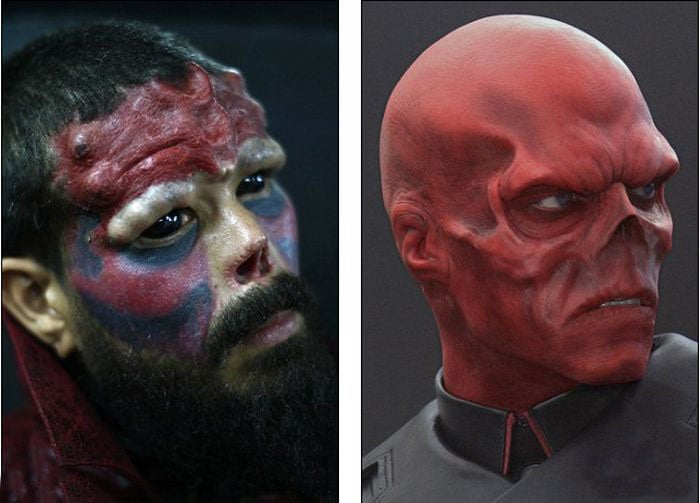