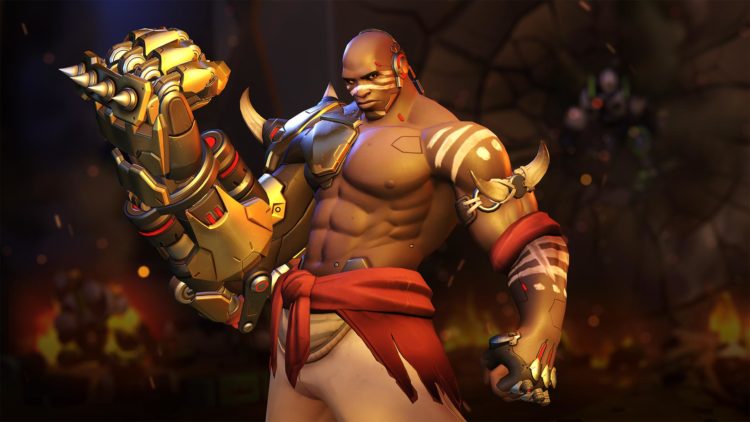 Doomfist is the 25th Hero to be introduced in Blizzard’s Overwatch. He is interesting in that he started out as nothing more than a name, but when his gauntlet was featured in the announcement cinematic, that propelled the process that turned him from a vague notion to a playable character in his own right. On the whole, Doomfist is one of the cooler Overwatch characters out there, not least because he is so visually striking. Here are five reasons that Doomfist is the best Overwatch character:

Doomfist is a title that more than one person has taken up in the Overwatch setting. The current titleholder is a Nigerian businessman by the name of Akande Ogundimu, who runs a family business that specializes in prosthetics. For those who are unfamiliar, the Ogun in Ogundimu refers to a powerful figure in the Yoruba religion, the Dahomey religion, and various Afro-American religions influenced by them, who is somewhere between a god, a spirit, and a saint. Primarily, Ogun is famous for being a patron of warriors, metalworkers, and technologists, thus making him the perfect choice of reference for Doomfish, who has elements that resonate with each of those three things.

2. His Evil Is Ideological

Speaking of which, while there can be no doubt about the fact that Doomfist is evil, he is interesting in that his evil is ideological in nature. In short, he is a proponent of war because he believes in war’s potential to strengthen those who pass through its crucible, which sounds cartoonish but has plenty of precedent in real life. Other kinds of evil can be intimidating, but ideological evil is particularly so because it possesses a measure of personal conviction. Moreover, it should be noted that the great ideological struggles of the 20th century continue to loom over the popular imagination, meaning that the concept of ideological evil possesses a considerable measure of metaphorical weight as well.

Gameplay-wise, Doomfist possesses a very distinctive playstyle. This is because while he possesses long range combat capabilities, a combination of low damage and slow reload time means that remaining at long range is not a viable option for him. Instead, he needs to engage his opponents at close range where he can bring his considerable punching power to bear on those who are unlucky enough to take it head-on. For people who are a bit bored with other characters, Doomfist could be exactly what is needed to restore that sense of freshness for their play experience.

On the whole, Doomfist is a very high-risk, high-reward character. His defense at a distance isn’t very good. Moreover, he has a larger than normal hit box, thus making that defense issue that much more of a problem. However, the upside is that Doomfist packs a lot of power, so much so that it is possible for him to tear through his enemies with comboed moves as though he was a character out of a fighting game. In the hands of a poor player, Doomfist is doomed to go down hard and fast, but in the hands of someone who knows exactly how to use him to maximum effect, he can produce very good returns indeed.

Finally, Doomfist is interesting because he sheds some much needed light on Talon. In short, Talon is supposed to be the great antagonist to Overwatch, as shown by the fact that the two organizations even have similar membership made up of soldiers, scientists, and various oddities. However, for a very long time, there was little that was revealed about Talon’s internal workings, which was a serious issue in light of its role in Overwatch‘s narrative.

Doomfist has changed that by providing Talon with a sense of purpose both in and out of setting. Moreover, he has provided the organization with a much-needed sense of dynamism, seeing as how his storyline has seen him escaping imprisonment and then claiming a position of prominence in Talon. Perhaps unsurprisingly, this consisted of Doomfist eliminating the previous occupant of the top spot before claiming it for himself, thus ushering in a new set of leaders with him serving as their center.