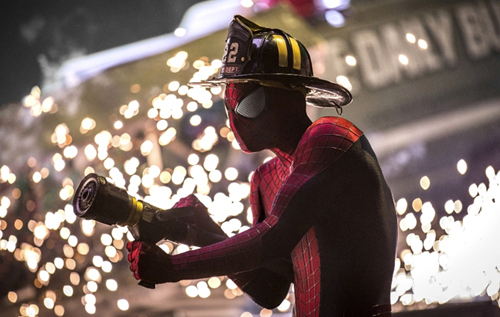 Did you know that the Amazing Spider-Man 2 was the only recent Spider-Man film that was deemed rotten from RottenTomatoes.com!? I’m sorry, but did everyone somehow miss Spider-Man 3 from Sam Raimi? This injustice has sparked a new idea for a continuing post that I’d like to start – Defending the Rotten. I started looking for other filmson RT that may have missed the “certified fresh” ranking and found that there are plenty that didn’t make the cut. The most recent Spider-Man outing is definitely one that is due for some justification.

If you haven’t gathered by now, I tend to defend the films and television shows that I favor. (as we all do in one way or another) I never ask for anyone to buy into my BS nor do I expect you to, but maybe, just maybe, you’ll read these posts and look at the films a little differently. Again, I can’t fathom how this film was ranked lower than Goth Spider-Man and now I’m about to tell you why.

Let me illustrate the problem at hand with a simple graphic… 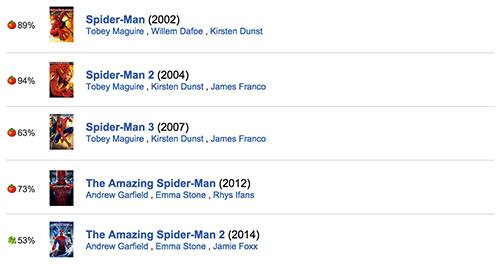 One of these things is not like the others…

When a movie is reviewed many things are taken into account. These critics look at things like directing, acting, characters, writing, plot/story, cinematography, and special effects just to name a few. They also take notes on how a film such as the Amazing Spider-Man 2 compares to the films that came before it. They want to make sure that the continuity and themes from the first film are met with standards that allow the universe of the films to make a certain cohesive synergy. Then why out of all that I’ve listed was this film ranked as the least successful out of the 5 most recent? I wouldn’t be throwing my arms up about this if it was certified fresh, but it wasn’t. To top it off, the mishap that was Spider-Man 3 apparently met this criteria better by at least 10 percent. Say it with me now … WTF?!

About the best thing one can say about this fiasco is that Webb has taken only two films to reach the same exhausted, exhausting endpoint that Raimi required three to achieve. It’s progress, of a sort.

This is just one of the many “reviews” on RT about the Amazing Spider-Man 2. What can I say, I liked the movie. It had it’s flaws but nothing that overshadowed the fact that it was a fun and entertaining ride. One that I would argue was far better than X-Men United, I mean X-Men: Days of Future Past much less Spider-Man 3. One factor I think is relevant is that critics are becoming burnt out on the Spider-Man franchise and seem to be judging this 2nd go around quite harshly. I can’t help but think that if this was the first time we had ever seen Spider-Man in the past 15 years that the ratings would reflect a completely different result.

Would you agree with me if I said that critics expectations have changed because of what I like to call the “Avengers effect” ?… meaning, that if it’s a Marvel film, it better be a mashup of epic proportions and play to the favoritism of the moviegoers out there. Which if you look at the marketing and the way that this film was pushed among the masses, you might have thought it was trying to shoot for that sense of epic-ness. 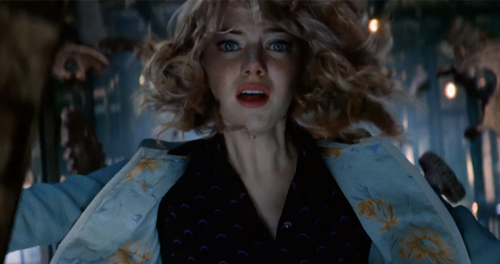 Should I mention this will have spoilers?

The Amazing Spider-Man 2 does so many things right and I’d like to point out a few for you. The first is the chemistry between the two main characters being brought to life so well by Emma Stone and Andrew Garfield. Now granted this is probably due largely in part because of the offscreen relationship the two have. Regardless, Gwen Stacy is Peter’s first actual true love and is a milestone in how Peter/Spider-Man develop moving forward. Showing that Gwen wasn’t going to wait around for Peter to make a decision, that she herself was head strong and capable of being on her own was an excellent addition. People are always used to seeing the “damsel in distress” and Gwen Stacy was more than that. She was strong, confident and capable – which breaks the mold and is quite refreshing when compared to the first 3 Spider-Man films. (need we mention that Kirsten Dunst was an awful casting choice for Mary Jane?) Then you have the inevitable death scene, something that comic fans (yours truly) knew would happen, and yet somehow wished wouldn’t. I wished she wouldn’t die, because I felt that it was worth keeping Emma around for at least one more movie. It had to happen though – it just had to and they didn’t disappoint. My wife, who knows nothing about comics much less the story of Gwen and Peter, went into the movie knowing that Gwen was going to die. Yes, I told her, but only because she asked. Then the scene played out and I looked over at her to see what her reaction might’ve been and she was bawling her eyes out. Consider me shocked – someone who has no ties to the comic world was touched enough emotionally that she was openly crying at a comic book movie. Shocked might not have been the best way to describe what I was feeling – perhaps I was impressed more than anything. Impressed that my wife was willing to let it all out, but also impressed that the film had that kind of emotional draw. 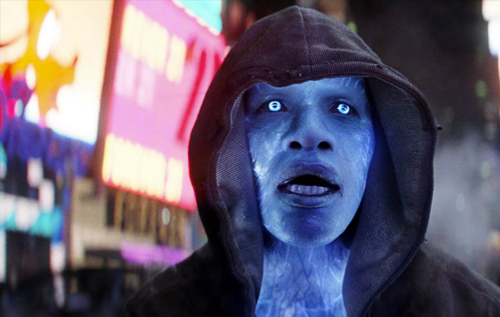 Right away the film came under fire for having 3 villains and the early rants were ablaze all over the interwebs claiming that it would fall prey to the faults of Spider-Man 3. You should never judge a book by it’s cover, or a film by it’s trailer. The actual release had 2 villains and a few baddies sprinkled in for extra flavor. Again, marketing doing a poor job at really showing what the movie was. Electro was the main villain for the majority of the film and had some fantastic scenes. Jaime Foxx was perfect as Max and really offered up a formidable challenge for the web-slinger. Plenty of time was given to flesh out Max’s story and allow the audience to empathize with his character. Nothing about Electro’s presence in the movie felt rushed or unattended.

DeHann’s Green Goblin didn’t fare as well but was represented almost perfectly with subtle hints to the comic book nerds out there. Much of which I’m sure that the critics were unable to catch. Hints like Harry’s addiction problems and the fact that he was dating/dated a “model” – aka MJ. Again, if you aren’t in tune to the comics these things would pass you by and allow the movie to feel disjointed and I sympathize with you on that – but I don’t feel that its grounds for a poor rating.

(side note, I loved the way Rhino was portrayed and can’t wait to see more of what the Sinister Six has in store, this is where the marketing really did the film an injustice by making you believe there were more than 2 actual main villains)

Spider-Man was actually Spider-Man for a change. Peter felt uncomfortable and awkward but as Spider-Man he had a confident cockiness about him that many people love from the comics. His sarcasm and fun one-liners were all there and provided a lot of the comic relief to keep the movie from being too heavy. I was so happy to see spider-sense and the webshooters finally get their due as well. For those that aren’t aware, Spider-Man has this awesome ability that is referred to as “spider-sense” that is a cognitive pre-warning to something unfortunate that is about to happen. Something that was never utilized as well as it could’ve been in any of the films up to this point. (yes, even including the first Amazing Spider-Man) The webshooters are important to make mention of because it helps show that Parker is a scientist and VERY intelligent. Watching him come up with scientific solutions to the challenges he faced in this film was refreshing and a nice change of pace from the normal hand to hand combat. Brain over brawn is a sure fire way to win the ladies.

So yes, I know I’m biased. I know that people felt the movie was disjointed and rushed, and I don’t necessarily disagree with these points. Could Harry have had more screen time? – sure. Did the Rhino have to be in the movie? – no, we didn’t really need the minimal introduction to the Sinister Six. Though these among many of the other points that I’ve read and heard time and time again aren’t enough to fault the movie so much that it’s seen as a “rotten” film. The Amazing Spider-Man 2 has more heart and character than many of the other comic book movies that get high praise. Is it wrong to want an actual COMIC book film to feel like a comic book? When comic book experts such as myself (chuckles at the use of expert) notice that the director/writers snuck the introduction of Felicia Hardy in, paid homage to the outfit that Gwen Stacy wore and just flat out showed a lot of attention to detail outside of the normal bad guy vs. good guy plot, we come away smiling. With all that awesomeness on screen and no Tobey Maguire in sight, we tend to think that everyone else should too.

httpv://www.youtube.com/watch?v=BvHXzP2SpLA I’ll be damned if I watched them, or even looked up who won until now, but some of you may care who ended up winning the Golden Globes last night, and if you don’t…

So yes, this is a far cry from the art styles we usually feature on the site here, but it caught my eye and I wanted to share it with you. It’s from a DeviantArtist…

(click to enlarge) I’m going to assume this is from DeviantArt, since where the hell else would something like this come from? Someone just ripped it to Imgur without any artist credit, which is a…

I swear I’m not a film snob.  Despite my interest in foreign and independent films coupled with my penchant for bashing mindless, “fun,” action flicks where the whole idea is to turn your brain…

Usually when you see giant murals that take up the back of a car’s window, they’re on a pickup truck, and they usually depict a deer getting shot with a crossbow, a bald eagle grabbing…

Since Alec Baldwin is a complete badass I was rummaging through some old clips of his back in his more studly days.  And clearly one of his best lines of all time was the “I…