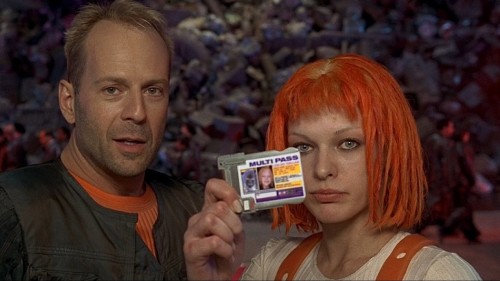 It’s a campy, absurd movie that takes basically every cliche of a space action/adventure movie, puts them in a blender, pitches it as “Die Hard in space” (bonus points for actually casting Bruce Willis), signs world-famous fashion designer Jean-Paul Gaultier for the costumes and basically tells him to go nuts (spoiler alert: he does), and hires Chris Tucker (whose best-known role at that point was Smokey from Friday) to play a character that’s part Prince, part Robin Williams, and part Don Juan, all mixed together and powered by an almost certainly near-lethal amount of cocaine, and tells him to go even nutser.  (He also does).

The movie is also incredibly polarizing.  It’s a very “love it or hate it” type movie.  It’s probably not hard to guess which side of the camp I fall into.  And over the next 750 words and heavy assortment of .gifs, I’m going to make my case for The Fifth Element as a stand-up classic.

Reason #1 – It takes itself seriously about 75% of the time 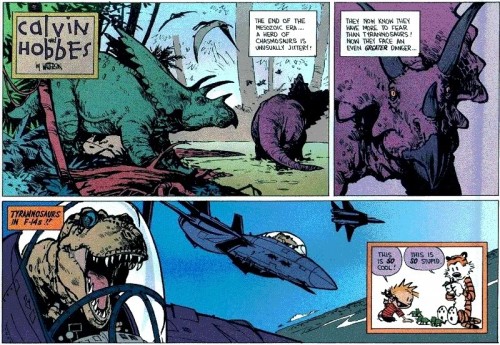 This Calvin and Hobbes strip sums up my feeling about The Fifth Element pretty well.  The actual plot of the movie is absurd if you think about it.  It’s the future, and there’s a giant Prime Evil ball of fire that’s going to destroy everyone, except for these elemental stones and a guardian or something, and then it turns out that the key to defeating evil is love.  It’s a plot that begs not to be examined too strenuously.

All that being said, the movie only takes itself seriously to the extent that it doesn’t devolve into farce.  It’s not parody or satire, it’s more of an homage to classic space adventure and Heavy Metal and the stylized visuals of sci-fi comics.  It’s the same feeling with every other borderline “this is almost too juvenile for me to like,” franchise, like RWBY. It’s both Calvin’s perspective and Hobbes’ perspective at the same time:

Both are true enough.

Reason #2: Gary Oldman and Chris Tucker chew the hell out of the scenery

Gary Oldman is a hell of an actor.  Like Johnny Depp, he’s a big fan of the oddball roles.  He doesn’t quite have the sex appeal of Depp, nor did he have that one huge role that catapulted him into super-stardom, but he’s a hell of an actor and he’s made a career out of impeccable character work. If you’ve ever seen True Romance or The Professional, you know that he plays a scenery-chewing evil psychopath really well.  He’s the semi-cultured version of that in The Fifth Element.

Chris Tucker plays a radio host named Ruby Rhod who acts likes a coked-up Prince – flamboyant, fabulous, hyper-feminine, and yet a huge hit with the ladies.

I’m guessing Chris Tucker’s character is a big reason why The Fifth Element gets the big thumbs-down from some folks.  On paper, especially during the 2nd half of the movie when he transforms into Bruce Willis’ useless sidekick/comic relief, he really should be annoying.  I couldn’t fault anyone for giving this movie an instant pass just for Ruby Rhod, but for me, it works.

For one thing, Tucker’s is just so committed to the insanity.  For another, he perfectly captures and somehow predicts the kind of flip-a-coin serious or not, hidden behind 17 layers of irony, meta-humor performance art that we’re inundated with these days.  Remember, this totally predated Lady Gaga, Gangum Style, and What Does The Fox Say.

All the wackiness, the absurdity, the homage to classic sci-fi tropes would be kind of useless if the movie didn’t have its own merits.  And you know that plot certainly isn’t one of them.  Thankfully, The Fifth Element shines when it comes to humor.  In that, it kind of reminds me of The Princess Bride, a bit.  The irreverent tone couched in classical “good vs. evil” is the same, and both films don’t hinge on an overarching plot so much as they hinge on jumping from memorable scene to memorable scene.  When I think of The Princess Bride, I think of the sword fight scene, or the other sword fight scene, or the Billy Crystal scene, or the Rodents of Unusual Size scene.  When I think of The Fifth Element, I think of certain scenes as well.

Fun fact – the crazy guy in that scene is noted Very Serious filmmaker of See How They Fall and La Haine Mathieu Kassovitz.

And of course, no discussion of The Fifth Element would be complete without saying something about that one scene…

The opera scene is a great place to finish, because it perfectly encapsulates the movie for me.  On the one hand, you have something that’s presented for just a few moments as serious and beautiful, an otherworldly opera singer performing in front of a majestic tableau of a planet seen from space (get it??? It’s an opera in space, in a Space Opera!)

And then, in the exact same scene, you have the music get all techno-y and she starts dancing like this:

See what I mean?

One of my favorite posts from the past year was this photo set which had a traditional engagement photoshoot invaded by a zombie attack. So naturally, I’m open to any sci-fi themed engagement shoot in…

The 90s brought us a great many things. Saved by the Bell, slap bracelets, Ying Yang necklaces, JNCO jeans, and an avenger with a green mullet. What could define that generation better than a half-naked…

What happens when superheroes just sort of give up on the whole “hero” thing, and really let themselves go? Well, as you’re about to see, the results aren’t often pretty, and there’s a reason only…

It lays little EVE eggs! But seriously, this is a wicked cool art project, and one I’m definitely trying out next easter with my little cousins, as even I think I could do it without…