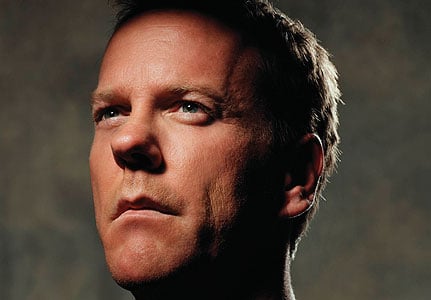 Incredibly, Sunday night brings us the eighth season of 24.  It’s tough to believe that Jack Bauer has been braking necks and barking orders for seven seasons already, but nevertheless, here we are.  I quit watching 24 last season after just a handful of episodes, mostly because I think the show has become predictable, lazy, and horribly cliched.  Long gone are the days of characters actually dying violent deaths (and staying dead) and bombs actually going off.  So when 24 premieres on Sunday night, I most likely won’t be watching.  It’s going to take an alien invasion, a time-traveling Jack Bauer, or a zombie apocalypse to suck me back into the show that has fallen so far. 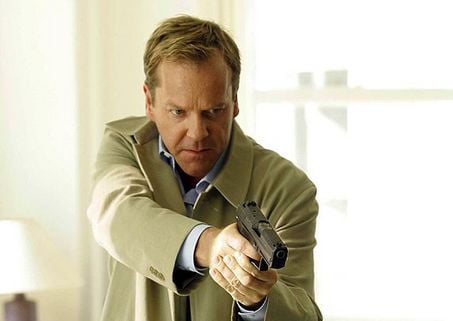 I’ll tell you exactly what you’re going to do on Sunday night.

The first three seasons of 24 were not only incredibly entertaining, but smart, explosive, and original.  24 was so refreshing and different from other television shows in that it didn’t pull any punches and you really had no idea what to expect.  It was anything but formulaic.  Best of all, Jack Bauer was as clever as he was deadly and was often two or three steps ahead of the audience.  The number of surprises and “holy sh*t” moments from the first three seasons of 24 are many: Teri Bauer’s death, Nina Myers’ treason, George Mason going down with the nuke that wasn’t disarmed, Jack having to kill Ryan Chappelle, Jack pumping an unarmed Victor Drazen full of bullets, Jack chopping off Chase’s hand, Jack breaking a guy’s neck by putting him in a headlock and then running up the side of a wall, Ramon and Hector Salazar, JACK CUTTING OFF A GUY’S HEAD WITH A HACKSAW, and pretty much anything David Palmer did.  Suffice to say, the first three seasons of 24 were amazing.

But starting with the fourth season, the show really started to go downhill.  Surprises became fewer, and when something unexpected actually did happen, it felt contrived and cheap.  There were parts of the show I still really liked – like Peter Weller as bad ass Henderson and Chloe going from totally annoying to quite likable – but the quality was nowhere near as high as it was for the first three seasons. 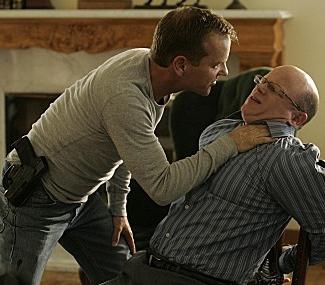 Aren’t you the guy who melted from toxic waste in RoboCop?

For example, the death of Tony Almeida – one of the major characters from the very beginning – was handled so poorly that it was practically an afterthought.  Pretty much inexplicably, Henderson comes back from the dead like something out of a bad horror movie to kill Tony, who for some reason wasn’t even worthy of a “silent clock.” Ryan Chappelle and even Edgar’s fat, bloated corpse get silent clocks, but not the guy who, aside from Jack and David Palmer, is the most prominent character on the show?  Of course, it’s not the fact that Tony didn’t get a silent clock that bothers me, it’s the fact that his death had no emotional impact whatsoever and became something of an afterthought.  I mean, crap, I was pretty choked up when Jack shot Ryan Chappelle, and he was a total douchebag.  Naturally, I wasn’t too surprised when Tony re-emerged as a villain (then good guy, then villain again), but at that point, I really didn’t give a sh*t anymore. 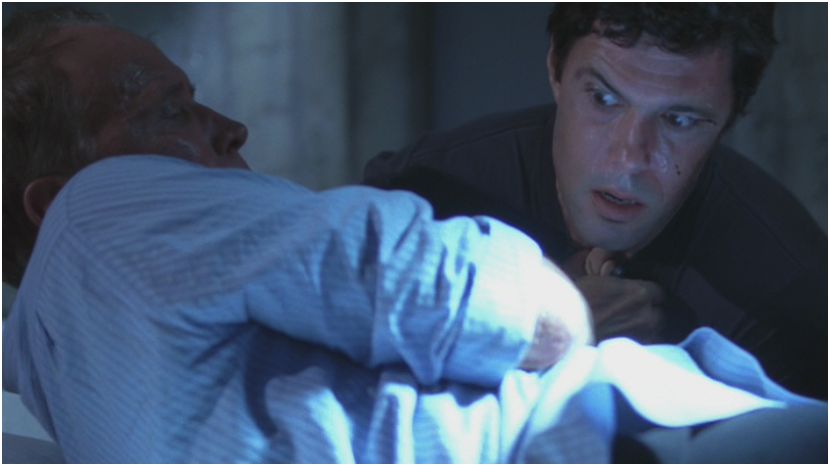 Ugh.  I’d rather just forget this.

So not only has the quality and intensity declined quite a bit, but the show has become formulaic.  Maybe things will get changed up a little bit as far as the setting – like putting Jack in D.C. or, this season, New York City – but other than that, it’s the same thing every season.  A small radical group from Russia/any Muslim country/Africa will have a major problem with the President/a Senator/American policy and launch an attack.  Jack, whether or not he’s with CTU, will inevitably be drawn in, someone at CTU will have a love affair with someone shady, and – and this is huge – there will be a mole at CTU.  Seriously, how many friggin’ moles have been at CTU over these past seven seasons?  You would think that an agency created specifically to fight terrorism would have a screening process with some teeth.  Will there be a mole or traitor this season?  You bet.

Like I mentioned above, there were aspects of the show I enjoyed despite its continuous worsening.  But after last season, I had to stop watching.  There were just too many ridiculous, asinine moments packed into the first few episodes to continue.  Perhaps most egregious of all was when Emerson (a villain) told someone at an embassy that he was going to count down from a minute and shoot him unless he disclosed some information.  Sure enough, Emerson counted down, but right as he reached “one,” the guy’s phone rang!  And what did it say on the caller ID?  I kid you not, “FBI!”  For one, I’m pretty sure that wouldn’t show up on caller ID, but more importantly, f*ck you 24 for bailing out like that.  A phone call with one second remaining on Emerson’s countdown?  How convenient.  And how many times did big, bad Emerson point a gun at someone, only to later knock them out instead of shooting them?  That wouldn’t have happened during the first three seasons of 24, but now that the show has been neutered, it’s a regular occurrence.  Jack pulled the trigger when pointing a gun at his own partner Chase in season three, but a bad guy can’t kill anyone?

And who could forget when Agent Walker (a.k.a. Rack Bauer) was buried alive underneath a tarp to end the show and SHE received the silent clock treatment?  Oh, you’ll have to tune in next week to see if she lives!  How dramatic!  I would have wagered my limbs and genitals that she’d be alive the next week, and of course I was right.  Lazy, predictable, and worst of all, the cheapest possible way to try and invoke drama.  When a show has to resort to cheap tricks like that to try and get you back the next week, it’s probably not for me.  Actually killing her off would have been pretty bold, but 24 has been anything but. 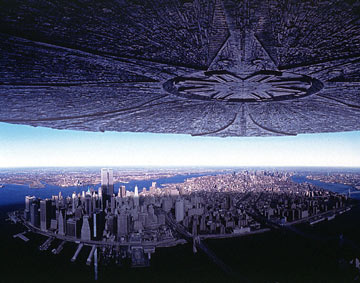 Just say screw it and bring in the mothership already.

Which brings us to Sunday night’s premiere.  From what I’ve seen and read, there’s nothing new about this season besides setting it in New York City and Freddie Prinze, Jr. (yeah…him.  I’m sure there will be a contrived love triangle, a group pissed off at the President, and of course a mole in CTU.  These past few seasons of 24 have really blended together as a forgettable mess, and it looks like season eight isn’t going to stray too far off the normal course.  So what’s the point?  If you’re going to make a show ridiculous, unbelievable, and with dozens of eye-roll-inducing moments, why not go all out?  I mean, would you rather watch Jack Bauer take on a separatist group from some third world country, or give everything he’s got against an alien invasion?  At this point, why the hell not?

And it doesn’t necessarily have to be aliens.  I’ll take an army of zombies.  Send Jack Bauer back in time to prevent an assassination.  Have him stop terrorists from using the Large Hadron Collider to open a portal to Hell.  If Jack Bauer is fighting Nazi androids, I’ll watch.  If it’s just more of the same, you can count me out.

Obviously, a lot of this is said in jest, and if I have nothing better to do on Sunday night (likely), I may end up watching.  But the days of 24 being must-see, cutting edge television are long gone, sadly replaced by predictable, lazy, repetitive crap.  Jack Bauer is and will always be the man, but 24 needs a major shakeup if I’m ever going to watch again.