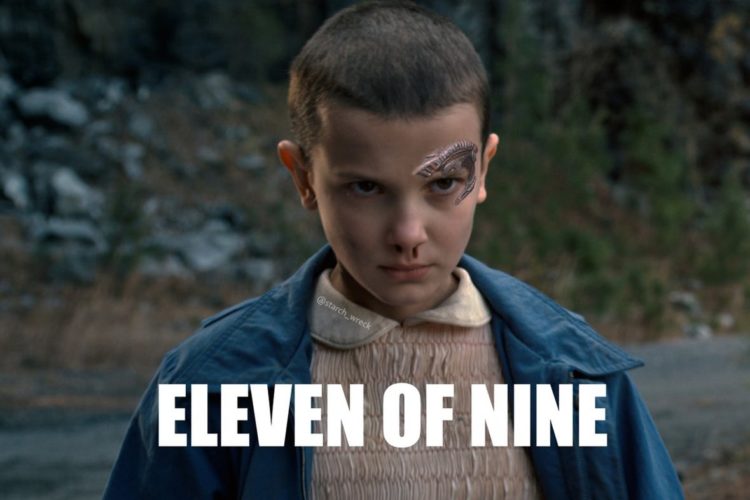 Memes are the new way that we get a chuckle and enjoy a laugh with nostalgic overtones. For “Star Trek” fans, the following collection is a goldmine. While there were plenty of humorous moments on the popular series and films that followed, these memes add a new twist of funny. Here are 20 “Star Trek” memes that you’ve got to check out. 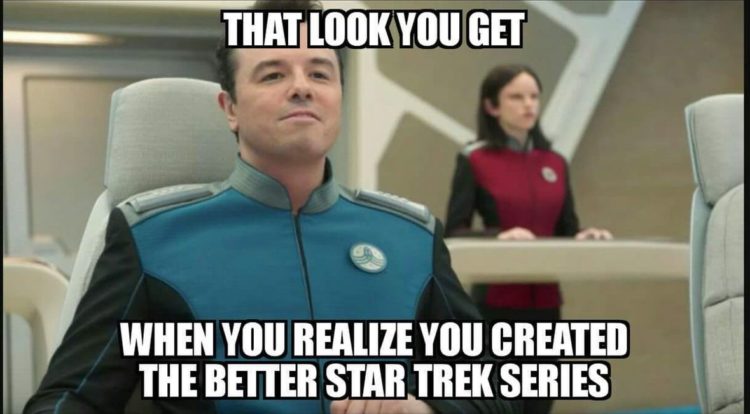 Check out Seth McFarlane’s satire of The Orville. The original series, according to many current fans has been improved upon and it appeals to a larger segment of the population. If you don’t believe it, this meme may change your mind. 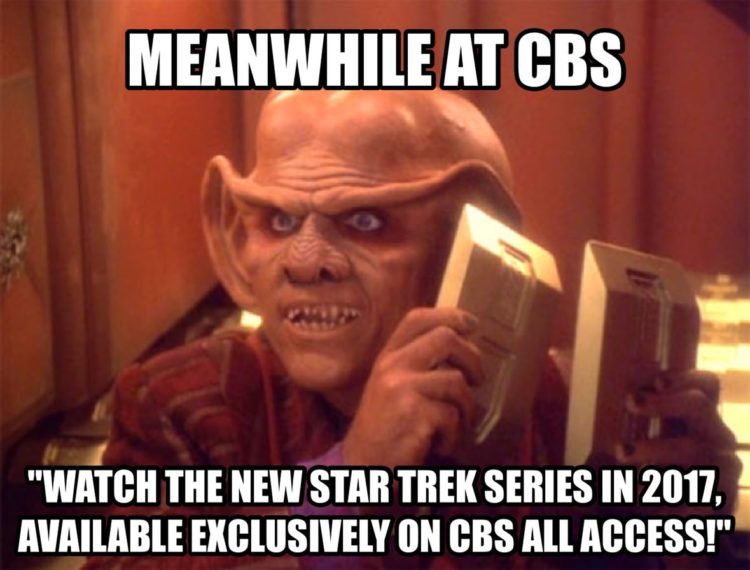 This meme takes a jab at CBS for being stingy with “Star Trek: Discovery” and its’ 2017 release. The streaming fees were a little steep if you wanted to see it over “CBS All-Access.” 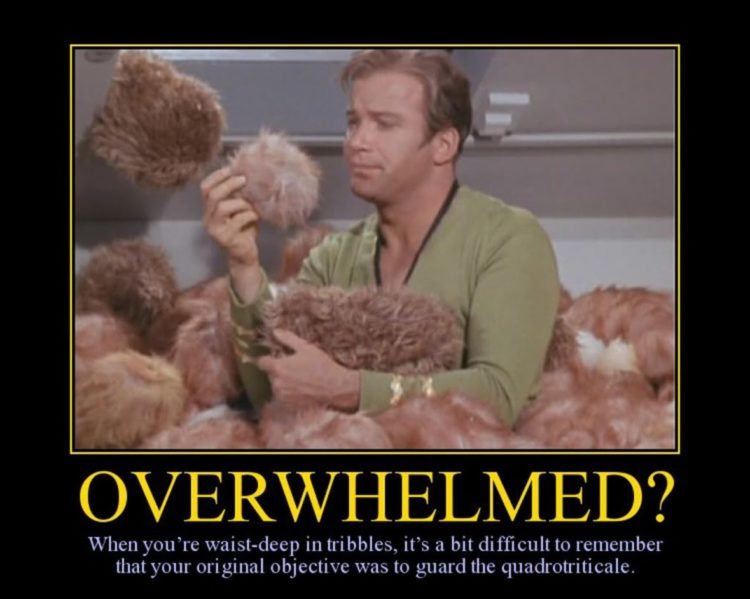 This nostalgic meme is one that fans of the original series will get a kick out of. Captain Kirk is highly disgusted as he’s overrun with “Tribbles.” This meme was created from the episode “The Trouble With Tribbles.” 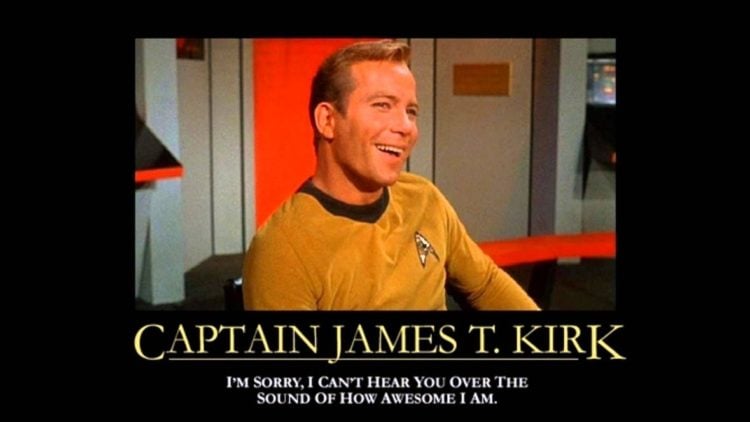 This is perhaps one of the better pics of James T. Kirk and the look on his face is priceless. He became a pop culture icon. It was this role that skyrocketed the great William Shatner to super stardom.

This is one of the funniest memes yet. If you’re a dual fan of “Stranger Things” and the character Eleven, then you’ll get the innuendo and the connection between Eleven and Seven of Nine. Think about the similarities in their childhoods and their early life experiences. 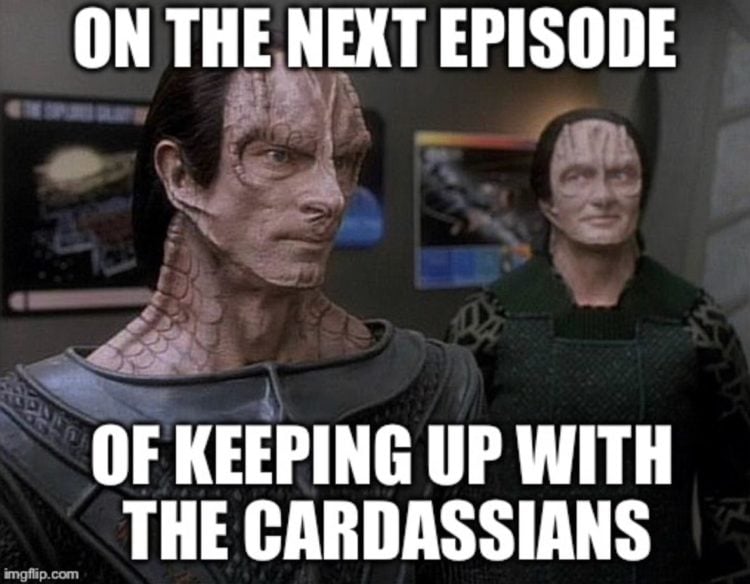 KEEPING UP WITH THE CARDASSIANS

This episode was filmed and aired long before the became a thing. This makes the theme all the more hilarious. Do you think that the Cardassians and their leader Gul Dukat are anything like the high fashion girls that now occupy the spotlight? 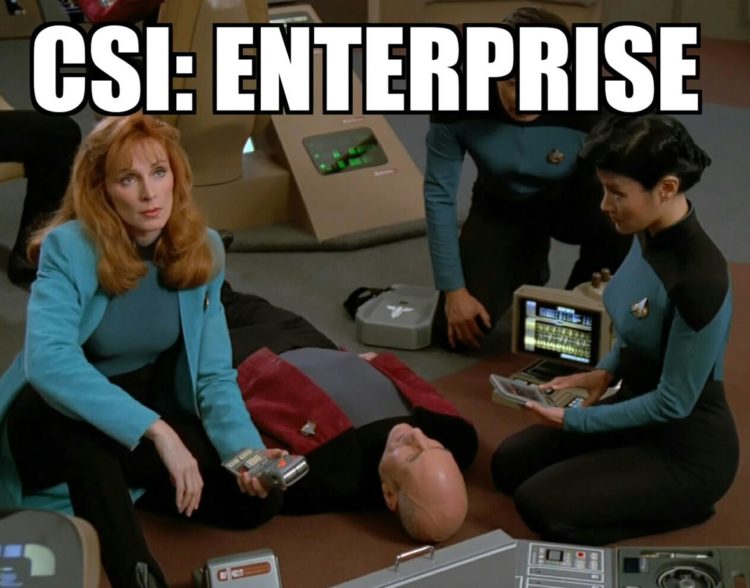 Talk about linking the solving of a good mystery to the original series. When you think about it, There is a strong connection between Drs. McCoy, Crusher, Phlox, Pulasky and the EMH to follow ethics and logic in finding human solutions. 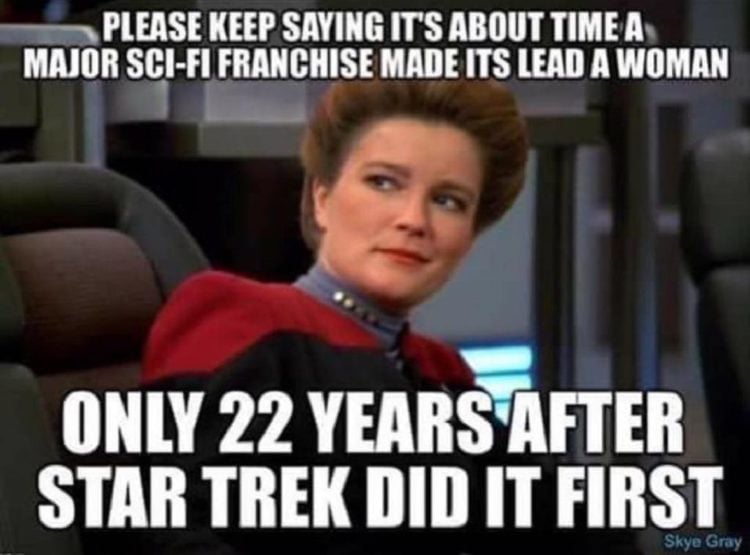 Hey, we’ve got to remember the significant contributions that Kate Mulgrew made to the presence of female leadership in film, and in outer space for that matter. There is little denying that she changed the dynamics with her mere presence on the series. 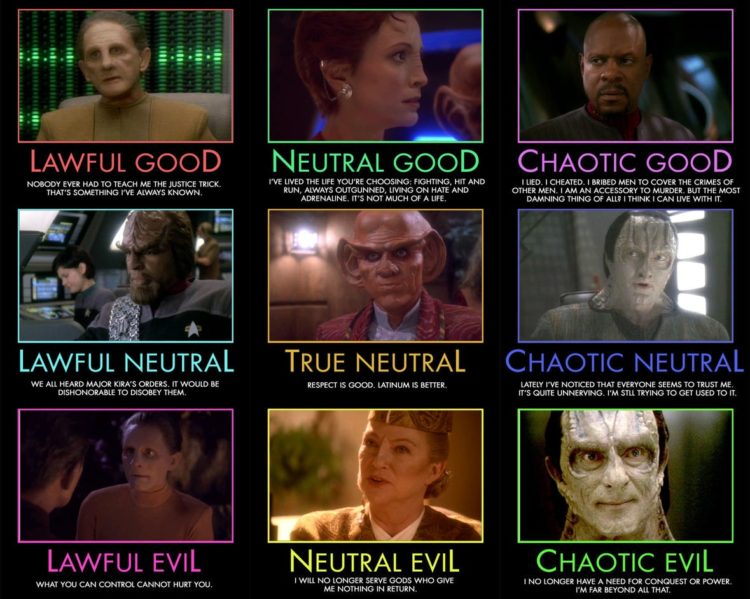 Who is the genius that applied the Deep Space Nine characters to a Myers-Briggs test? Hmm, let’s think about all the different personality types represented in these squares. Hilarity and sheer genius are behind the development of this side splitting meme. 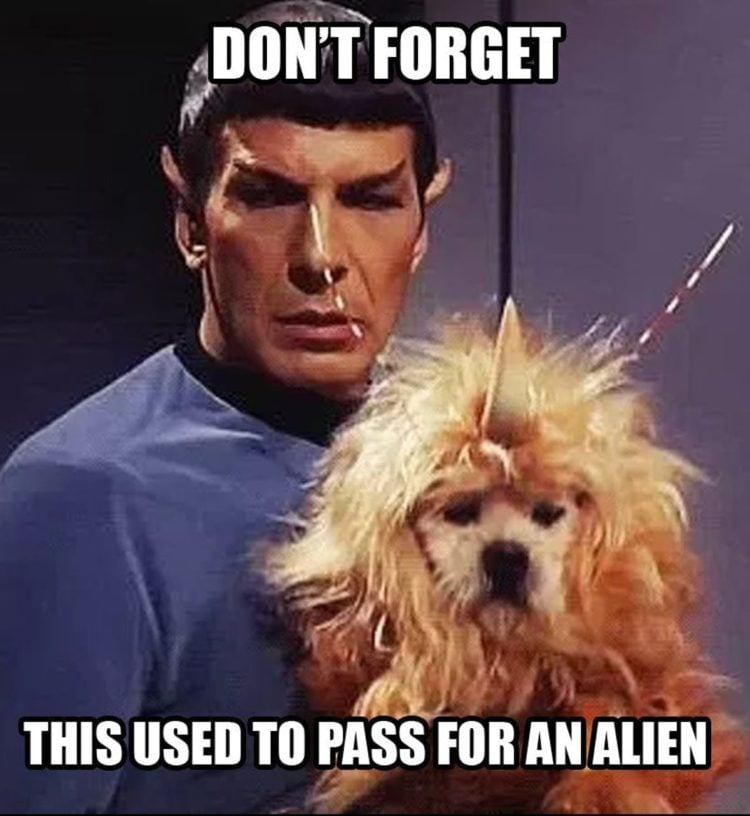 This meme shows us how far we’ve come in cinematography and creativity. Is this really meant to pass for an alien? It’s more like a cute little dog that had a few things glued to its head. C’mon, they could have at least made it seem more realistic. 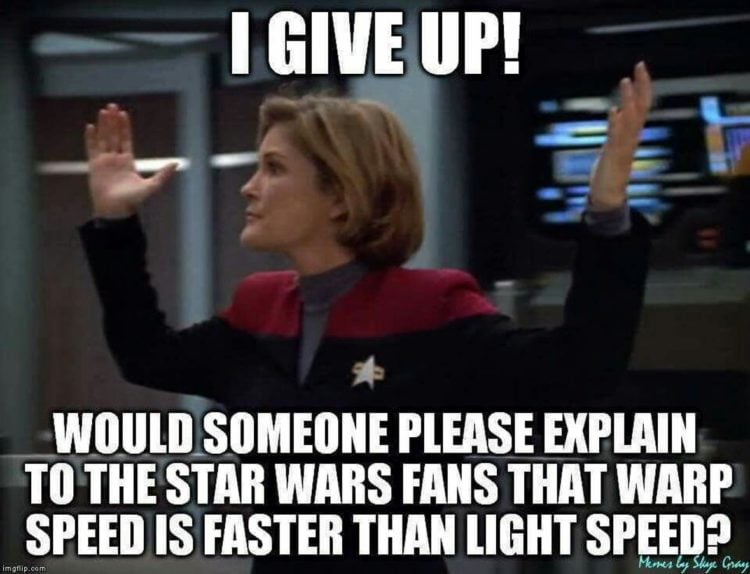 Would you rather travel at Warp speed or at Light speed? She gives up on the age old question. It’s tough when the captain of the star ship can’t make up her mind about it. 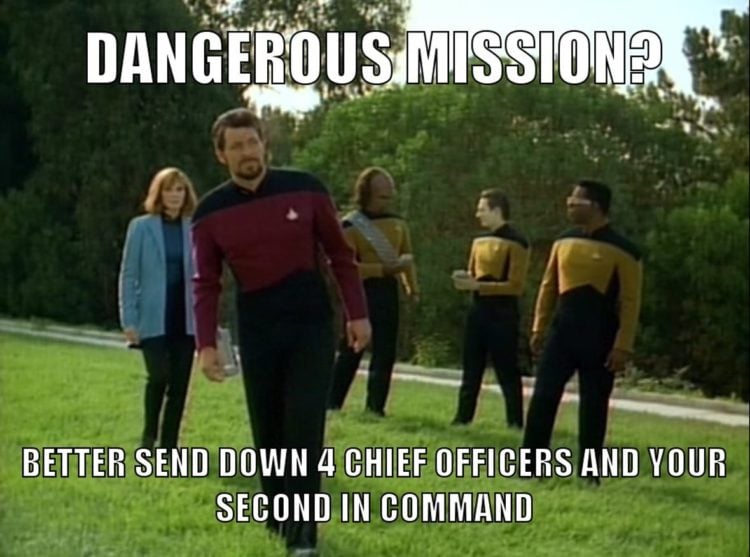 Why in the universe would the high ups all gather for a dangerous mission on an alien planet? It makes you wonder who was running the ship while the commander of the ship was busy risking his life in every episode. 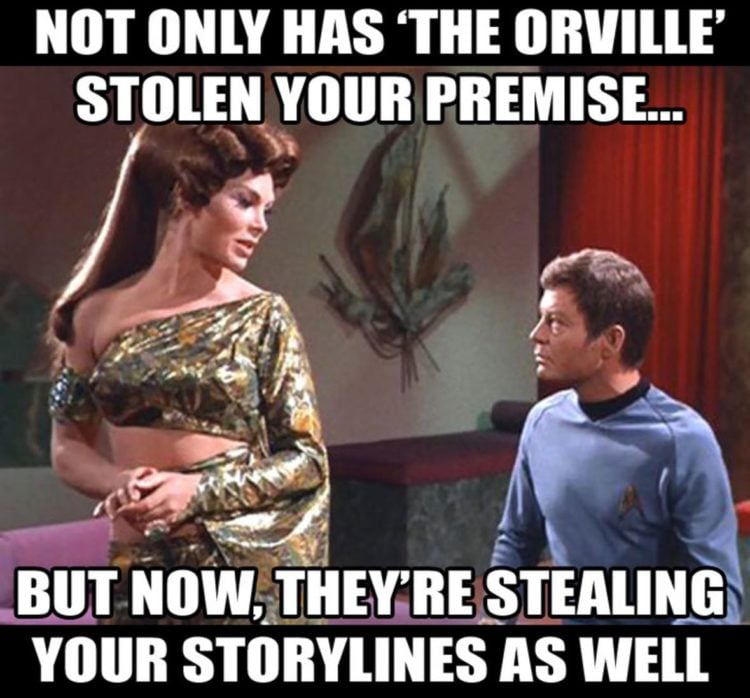 McFarlane’s The Orville parallels the journeys of the star ship Enterprise heavily and it’s opened up room fr a ton of humorous memes such as this one. 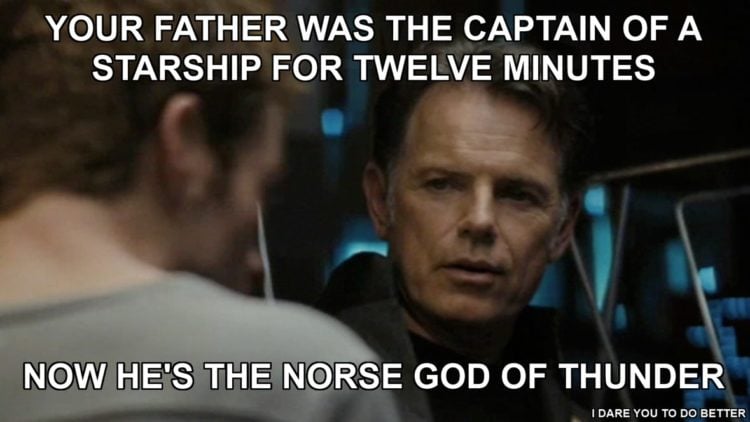 The reboot of the series with Chris Hemsworth, appearing as Kirk’s father, played by Chris Pine. Hmm, Pine and Hemsworth related? Father and son? Really? 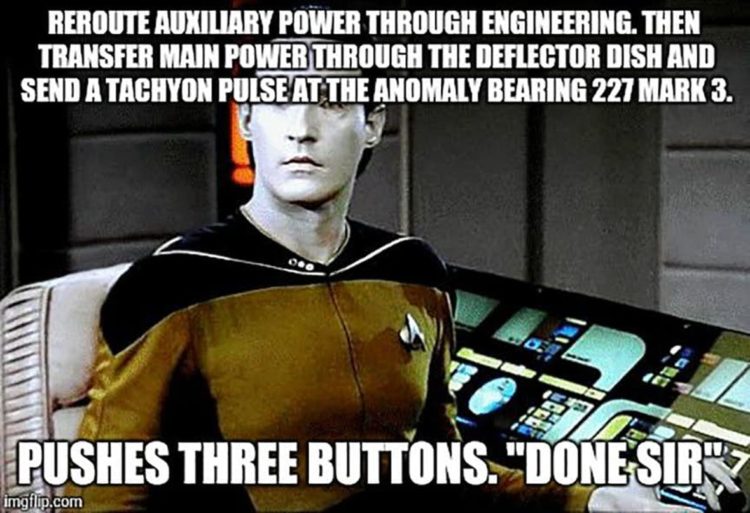 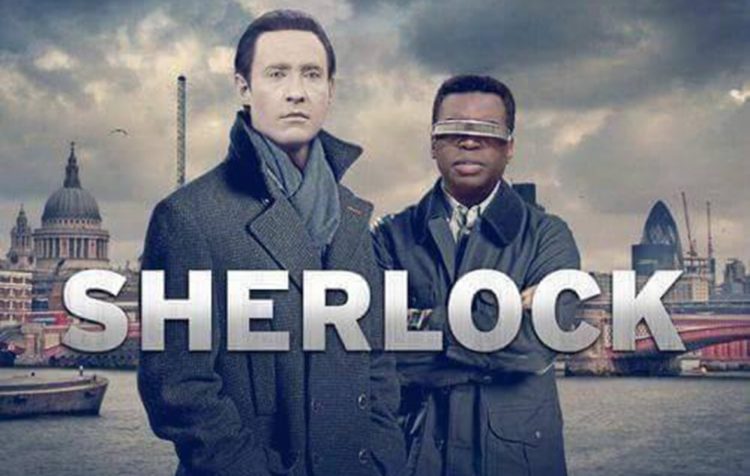 Data and Geordi La Forge are quite the pair on “The Next Generation.” As Data investigates humanness, along with the help of his new friend La Forge, the two are easily compared to Sherlock Holmes and his associate Watson in this hilarious meme. 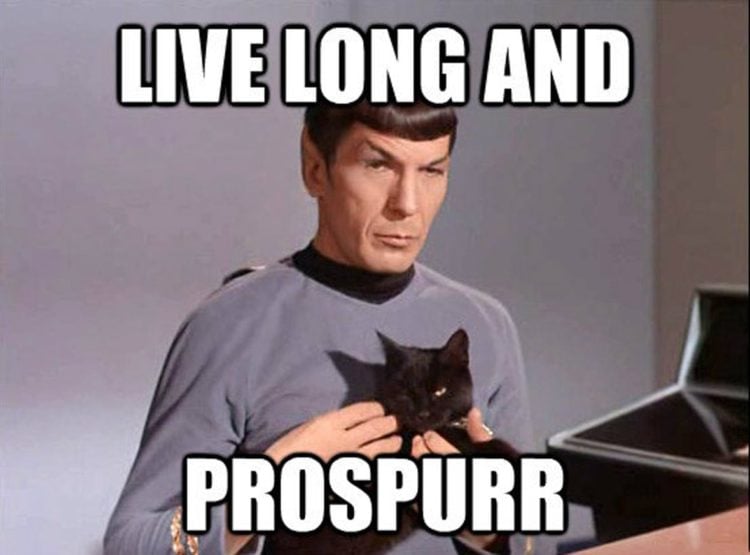 Leonard Nimoy’s character, Mr. Spock was known for his hard core use of logic and denial of any human emotions. Even though he was half Vulcan and half human, he avoided any revelation of his humanness. That fact alone makes this meme a real side splitter. 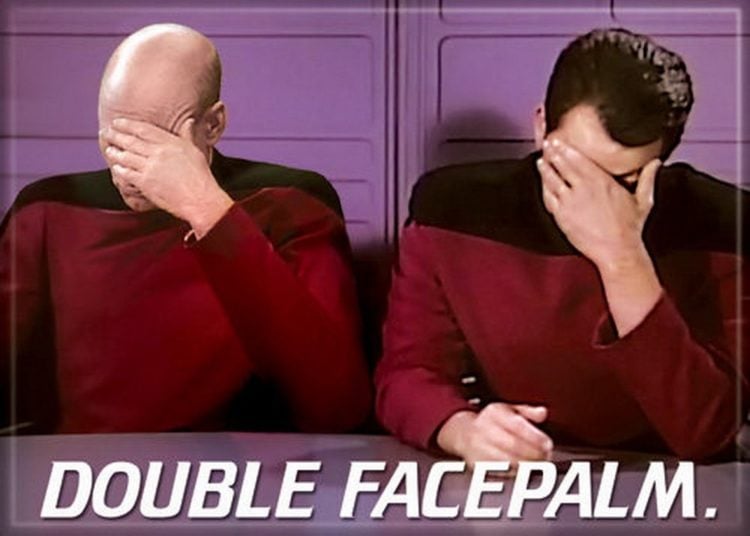 There is no way that you can look at this and not laugh. Both Riker and Picard assume the ultimate pose for a frustrated star ship captain. 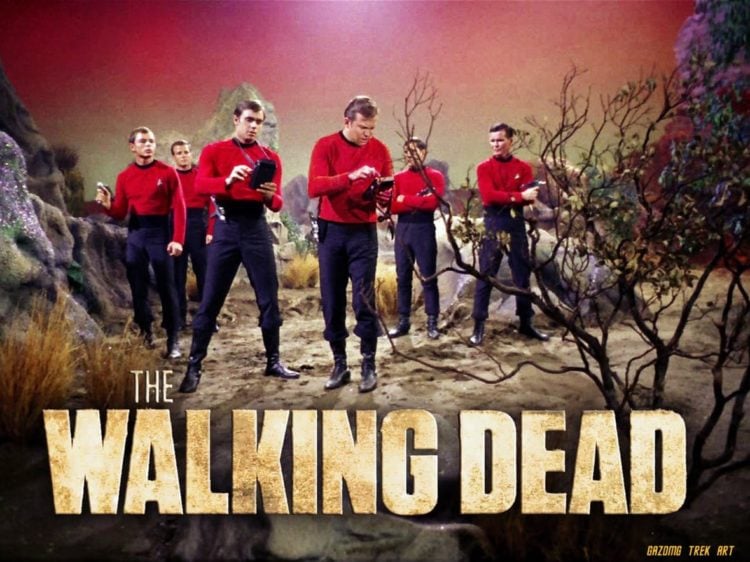 There is no way that you can look at this meme and not make a strong and hilarious connection between the Star Trek characters together and the popular show “The Walking Dead.” 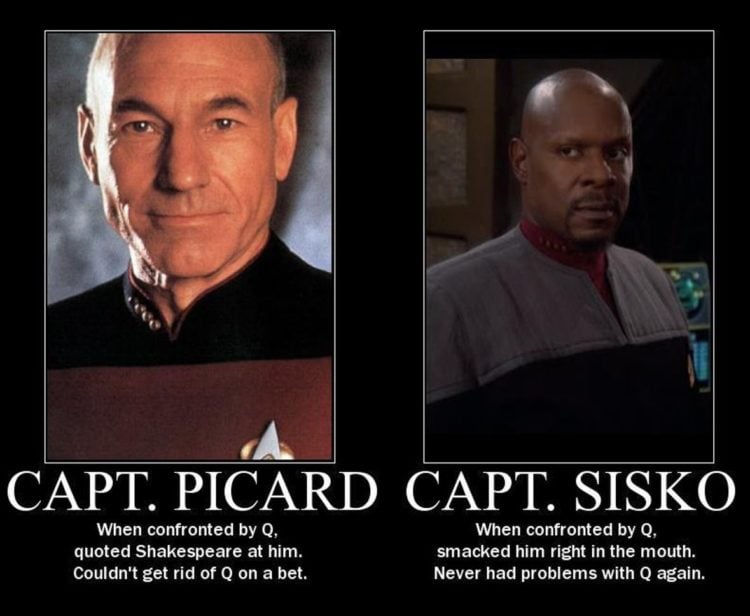 If you have any knowledge of the relationships between Q, Sisko and Picard, you’ll so get this meme.

Nothing’s cooler than little kids in exceptionally badass costumes, which is why I feel obligated to post this tiny rendition of Voltron for you today. I love pictures like these, because you know someday this…

Sam Rennock is an artist with a cartoony style that he’s brought to an entire host of pop culture franchises. From Mario to Mega Man to Game of Thrones to The Simpsons, he’s covered a whole…

Supernatural has reigned for eight seasons as arguably the most underrated and consistently entertaining show on television. Keeping any fantasy/sci-fi/horror series on the air for more than a couple of years seems to take a…

I liked Terra Nova, I really did, but the show is going to be balancing on a fine line between a cool, fun concept, and utter ridiculousness. I thought it struck a decent balance in…