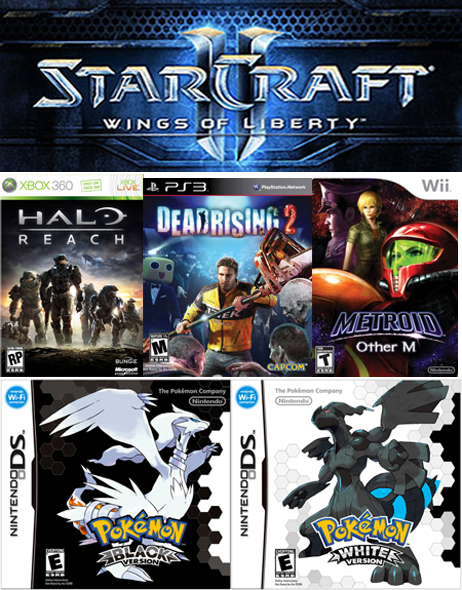 Hi there loyal readers, how are you? I’m great, thanks for asking. So anyway, I’m coming to you today to announce Unreality’s first ever reader giveaway contest.

The image above represents the prize selection. You, yes you, have the chance to win ANY of the above games of your choice and have it shipped to your house for free.

There’s Halo Reach, which I’m currently spending far too many hours a day playing. Starcraft 2, perhaps the greatest strategy game of our time, and the focus of many an article here. Dead Rising 2, the just-released zombie-slaying adventure, and Metroid: Other M, a legit attempt by Nintendo at making a game for actual gamers. And I couldn’t leave out Pokemon, and you can either get Black or White when they finally come out in the spring. Yes, if you win, and the DS is your system of choice, I promise to send you a copy once the game is released.

I believe I’ve covered every system with this selection here, PC, 360, PS3, Wii and DS, though I suppose if you really want Dead Rising 2 for 360 instead, that can be arranged.

So, how do you win? I promise it’s easy, read on for more.

Our little site here has grown a lot in the two years since its inception . That’s thanks to readers like you who have made Unreality a daily visit because you dig our stuff and even if you don’t share our interests exactly, you enjoy yelling at us when we disagree. Well, it’s in that spirit that we’re asking you to help us out, and expand the site even further.

We need you to like us. Specifically, we need your friends to like us. On Facebook. Yup. Everyone on earth is on Facebook more than pretty much any other site on the planet, so the expansion of our Unreality Facebook page is a big deal for us. If you’re not a fan yourself, you should be, as don’t worry, we don’t spam. We merely post one of our better articles a day to remind you to pay us a visit, and then usually a random status question we pose to the lot of you.

So what we need from you is that if you think Unreality rocks, invite your friends to like us on Facebook. It’s easy, as demonstrated by the picture below.

Hit that, then select which friends you want to invite, and send away.

We’d love for you to send it to all your friends, but we understand if you don’t want to send an invite to your third grade teacher or ex-girlfriend you’re not speaking to, so here’s how it’s going to work.

For every 20 people you invite, you get one entry into the contest. So for those of you reading the site instead of paying attention in math class, if you say, invited 400 people to like the site, you would have a 20x better chance of winning the prize than someone who just invited 20. And I will give you a bonus entry for every friend you have specifically message me and say they like the site. Just make sure they say that you sent them.

How are we going to do this? Well, you invite however many people you can (if you don’t have that many FB friends of your own, ask to do it on a friend’s profile if they don’t mind), and then email me at paultassi@gmail.com with how many people you invited, along with a name I can identify you by when I put your number of entries into the drawing. Yes, we’re using the honor system here, as I’m not going to make you guys take screenshots of you inviting people, but we would hope you wouldn’t BS us. Just send us the number and unless it’s something super insane, we’ll believe you’re being straight with us, and you’ll get however many entries into the contest you’ve earned.

We’d love to give away a ton of prizes, but like everything we do here on the site, this is out of pocket, so we can only give away two games to randomly selected winners. If you’re chosen in let’s say, two weeks, when this contest ends, I’ll let you know by email, and you can give us an address to ship to. Unfortunately, due to budgetary constraints, we can only ship inside the US, but international readers, feel free to invite people to be nice? Heh.

Anyway, we’re just trying to build awareness of the site, and if you guys would help us out, we’d be grateful, and will get you a little something for you troubles. It’s only a few clicks after all (OK, it’s a bunch of clicks cause they don’t have a “send to all” button, but still not that hard). Thanks again for reading! Let me know if you have any questions. 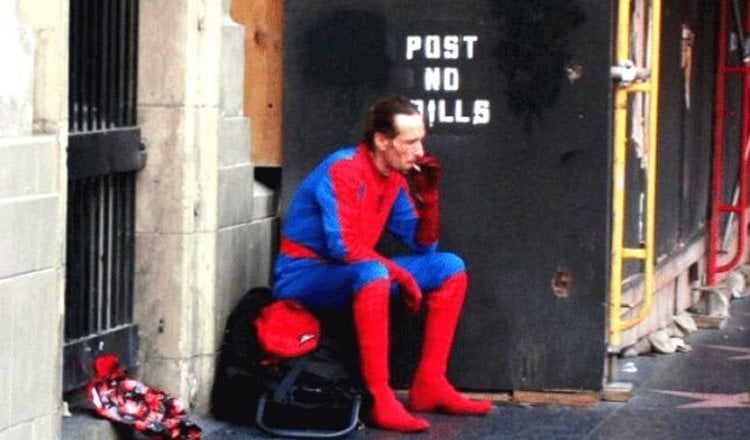 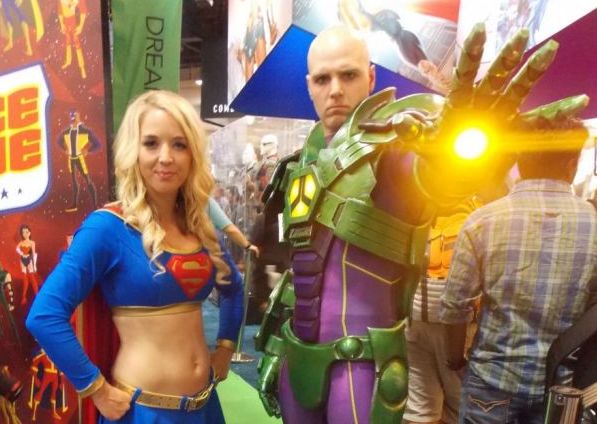