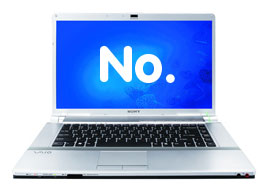 (I touched briefly on this issue yesterday in my Starcraft 2 review, and was writing this column for another site, but I decided to post it here instead. Enjoy.)

Starcraft 2 came out this week, a game that I’ve been looking forward to for what seems like eons. And that’s barely an exaggeration. The original title was released in 1998, and I remember in 2000 thinking they were waiting an awful long time to announce a sequel.

Well, in that ensuing decade Blizzard was a little busy buying up people’s souls with a little game called World of Warcraft, but finally they did get around to their long lost project, and now that it’s here, it’s glorious. Well, at least it is for some people.

A year and a half ago, I bought a Sony VAIO laptop. It’s always been fast for everything I’ve needed it for, the screen has been extremely sharp thanks for a Blu-Ray player and 1080p resolution. It’s been the perfect PC for me, outside of a few pixels that decided to commit suicide for no reason.

But after buying Starcraft 2, I now see that my laptop is complete and utter shit. Due to my 2.0 Ghz processor (far below the required 2.6) and my Intel “I don’t know the number but it’s not good enough” graphics card, I’m forced to play the game with graphics and texture settings on low. And when they say low, boy do they mean low. The game looks completely last generation, with blocky polygons and muddy textures, a far cry from the 1080p glory I’ve seen in broadcasted YouTube matches. I can’t even see death animations, my units just instantaneously disappear when killed.

I haven’t bought a PC game in years, so I shouldn’t be surprised about this fact, but it is rather disheartening to learn that A) a computer I paid over a grand for isn’t capable of even playing this game on “medium” and B) the experience of a game I’ve been looking forward to for 12 years is being tainted by incredibly shoddy graphics.

Now, I know that by writing this post, if it gets to PC gamers, I will surely be lambasted. “You moron, all you need is this processor and this video card and of course this game isn’t going to work on your piece of shit VAIO.” I’ve looked into a new processor, which runs about 50 bucks, though I have no idea if it’s compatible for my computer or how to install one. I had even worse results with searching for a video card, as the internet tells me it’s hard or impossible to upgrade one on an already-built laptop. The advice was generally to return the computer for a new one. A year and a half into this one, I think it’s a bit too late for me. 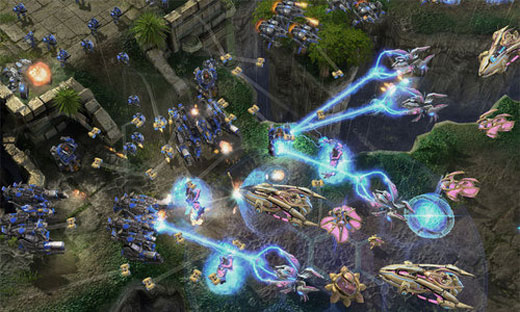 My computer would probably blow up if there was this much stuff happening at once onscreen.

So if upgrading my current “piece of shit” is impossible, what is my other option? Buying a whole new computer? I really need a laptop to be mobile for my writing gigs, but looking online for a computer that meets the system requirements, prices get really expensive, really quickly for so-called “gaming laptops.” The other option is a desktop, which has greater power at a lesser price, but that’s still anywhere from $600-$1000 when you consider accessories like a decent monitor. Any of these purchases just aren’t worth it for one game.

Surely many will persuade me to come over to the glorious oasis of PC gaming for good, but I’m alright with my console for most games, I really am. I can’t think of one other PC exclusive title I actually want to be playing until say, Diablo 3 comes out. I don’t care about dedicated servers (or lack therof) in Modern Warfare, I don’t want a level 80 World of Warcraft character and I don’t need to join a Team Fortress 2 clan. I like my console, and I’m not going to apologize for it.

It’s just sad to me that if I truly wanted to enjoy Starcraft 2 to its fullest, I’d probably have to spend hundreds and hundreds of dollars to do so, not to mention how much three expansion packs will add up to once those are all released. I guess I’m just used to the theory of “if you own a console, it will play games” but that doesn’t translate to “if you own a computer, it will play games,” not even if it cost four times what you paid for your Xbox 360. If this was another console exclusive, I might even consider shelling out $200-$300 just to play it with good graphics, because that’s how much I’ve been looking forward to it. But buying parts and cracking open my laptop or the more likely scenario of buying a new rig entirely, it’s just too much.

If there’s some magic fix I don’t know about, please, let me know. I realize that when it comes to PC gaming, I’m a complete noob, but if there’s no way to fix this outside of an ass ton of time and money spent, this experience certainly has turned me off to the concept of PC gaming in this day and age.

I guess will trudge on through Starcraft 2, ignoring my graphical shortcomings and trying to enjoy the gameplay, but there will always be the feeling that I’m only getting a half-hearted version of the game. In the end, it’s probably my fault for not knowing better. I played the beta and knew this was coming, but I just couldn’t not buy it. But I’m having fun, and hopefully someday, in the decade before Starcraft 3 comes out, I’ll own a machine that can play this game in all its glory.