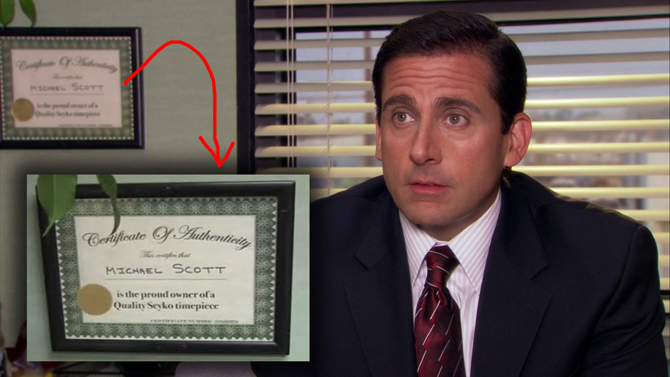 As you may recall, Michael Scott never went to college (or went to the school of hard knocks as he says), so then what the hell is that diploma up on his wall all these years?

Well one clever fan took a screenshot of it, and we now get to see that it’s actually a certificate of authenticity for his watch, in a joke that reminds us that the humor in The Office used to be subtle instead of having Scott drive into a lake or Dwight set the office on fire.

Those were the days.

(click for full size) I found these fantastic Game of Thrones pieces from the Tumblr Doodle, Doodle, but I’ll be damned if I can figure out the name of the actual artist as they don’t…

There’s been some debate about whether or not Walter White was in fact killed off during The Walking Dead this week. During the Governor’s list of names, many thought they heard him say that “Heisenberg”…

The Walking Dead is back and thank the lord, we are free at last. Yes, free from the drought of not having The Walking Dead on every Sunday, but also free of the wretched prison location of…

This may have been floating around for quite some time, but I’ll be damned if I’d seen it before someone sent it to me this weekend. It shows the person with the cushiest job in…

The Ring is one of the most terrifying movies I’ve ever seen (at least when I was fourteen and in the front row), and Teletubbies have been thoroughly weirding me out since my babysitting days,…

I’ve given a lot of shows a chance this year, probably more so than I ever have. I’m not normally one to get into new shows until they’ve proven themselves with enough good word of mouth,…