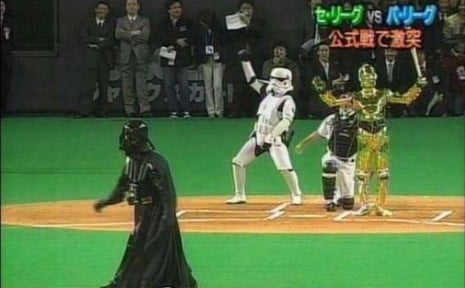 If someone here reads Japanese, it would be immensely helpful so I can figure out exactly what the hell this even is. I’m going to assumed it’s the Dark Side vs. the Light Side of the force in baseball, in which case it would be the first baseball game in history I would actually be excited to watch.

I searched for “Japanese Star Wars baseball on YouTube in an effort to find this game, but the only thing that turned up was this video which showcases a pitcher named “Yoda.” He is not short and green.

So if anyone has more photos of video from this, it would be much appreciated.